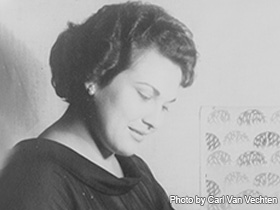 Opera diva Marilyn Horne was born in Bradford, Pennsylvania on January 16, 1934. When Horne was just a child, her father realized that she had exceptional vocal talent. Horne went on to become one of the greatest mezzo soprano opera singers in the world. Since her debut at the Los Angeles Guild Opera, she has performed over 1,300 times and been awarded numerous honors including four Grammy Awards. In 1994, she began the Marilyn Horne Foundation, which encourages and supports the tradition of the vocal recital. Although she has now retired from performing, Horne continues to spread her musical talent through teaching.

Marilyn Horne was born on January 16, 1934, to Berneice and Bentz Horne in Bradford, Pennsylvania. The Horne household was always filled with music; Horne's father was a semi-professional singer and her mother sang and played piano. From an early age, Horne and her sister Gloria performed for their family. Horne's father began coaching Marilyn when he realized her perfect pitch and two and half octave range. She began formal vocal study at age five, and made her performing debut at a Bradford political rally for Franklin D. Roosevelt's presidential campaign, singing "Believe Me, If All Those Endearing Young Charms."

When Horne was eleven, she and her family moved across the country to Long Beach, California. At the age of thirteen Horne began singing with the Los Angeles Concert Youth Choir, under the direction of Robert Wagner. The Youth Choir, later re-named the Roger Wagner Chorale, provided Horne with lasting friendships and career-boosting contacts. During her time with the Chorale, Horne met and befriended Franklin D. Roosevelt's daughter. This connection provided Horne with the opportunity to sing in Herbert Stothart's musical version of Roosevelt's inaugural address, The Only Thing We Have to Fear. While still in high school, Horne began singing backup roles for Metro-Goldwyn-Mayer films such as Joan of Arc. Horne graduated from Long Beach Polytechnic and started studying music with William Vennard at the University of Southern California. During her time at USC, Horne had the chance to sing in a master class taught by the renowned Lotte Lehmann. Horne also met her future husband, Henry Lewis, while in college. Though they divorced in 1974, Horne and Lewis had a daughter together, Angela, in 1965.

In 1954, at the age of twenty, Horne made her operatic debut with the Los Angeles Guild Opera in The Bartered Bride. That summer, Horne dubbed the singing voice of Carmen in the film Carmen Jones. In 1964, Horne made her debut at London's Covent Garden. The next year, during the Ojai Festival, a classical music festival in Ojai, California, Horne was approached by Lotte Lehmann, who invited Horne to participate in performances at the Vienna Opera House. Horne was next asked to sing at the Gelsenkirchen Municipal Opera in Germany, where she remained for three years. After returning to the United States, Horne performed as Marie in Wozzeck and then as Mimi in La Bohème. The Metropolitan Opera, which has recently named Horne its first official legend, first hosted her onstage in Bellini's Norma in 1970.

Horne has received numerous other awards and remains one of the best singers ever to grace the stage. She has been in over 1,300 performances and, in 1999, achieved her personal goal of singing in every state. Among Horne's notable awards is the Rossini Medaglia d'Oro, the first award given to her by the Rossini Foundation. She has also received the Commander of the Order of Arts, the Fidelio Gold Medal from the International Association of Arts Directors, and the Yale University Sanford Medal. Horne has honored by the Kennedy Center and has received four Grammy Awards: two for Best Classical Performance, one for Best Opera Recording, and one for Lifetime Achievement. Horne performed at President Clinton's 1993 inauguration and has been honored by Presidents Clinton and George Bush, Sr.

In 1994, Horne began the Marilyn Horne Foundation, one of the leading non-profit vocal arts organizations in the country. The Foundation, launched on Horne's sixtieth birthday, seeks to encourage, support, and preserve the vocal recital. For the last six years, Horne has showcased the foundation's work with a festival at Carnegie Hall entitled "The Song Continues." According the Peter G. Davis of the New York Times, "Over the last 15 years the foundation has presented more than 100 young singers in recitals and educational programs across the country, reaching an audience of more than 100,000."

Horne's last classical performance occurred in New York's Carnegie Hall in 2000, but she continues to participate in programs that share her interest in American folk and popular music. In 2005, Horne was diagnosed with pancreatic cancer, but in January 2008 she went into remission. She credits music as a critical factor in her recovery: "For me, at least, nothing helped surviving chemotherapy quite as effectively as dozing off with an iPod playing nonstop in my ear." She currently serves as the voice program director of the Music Academy of the West in Santa Barbara, California, a position she has held for over a decade.