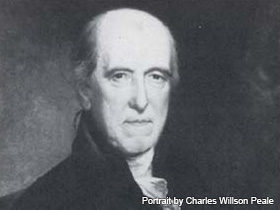 Jared Ingersoll (1749-1822) was born in Connecticut. He graduated from Yale in 1766, went on to study law in Philadelphia, and was admitted to the Bar in 1773. As a newly confirmed Patriot, in 1778 he established a law practice in Philadelphia. His most noteworthy profession, perhaps, was as a delegate to the Continental Congress, which allowed him to participate in the Constitutional Convention. He supported the plan for a new federal government. Ingersoll returned to law after the new government had been created. His career included, in order: vice presidential candidate for the Federalist Party, attorney general of Pennsylvania, Philadelphia's city solicitor, U.S. district attorney for Pennsylvania, and presiding judge of the Philadelphia district court.

Jared Ingersoll was born on October 24, 1749, in New Haven, Connecticut. He was the son of a British colonial officer. He had an excellent scholastic career, which included graduating Yale in 1766. After graduating, he worked with his father, overlooking his financial affairs, which consequently brought him from New Haven to Philadelphia. Shortly after this he studied law in Philadelphia, eventually being admitted to the Bar in 1773. During these years, Ingersoll was a patriot sympathizer but never displayed this to his distinguished father. This same year, he went to London to continue his education at the Middle Temple for the next three years as his father wished. Following his way as a patriot sympathizer, and after hearing of the colonies declaration of independence, Ingersoll went back to Philadelphia in 1778, declaring himself a patriot, and started a law practice. Shortly after this, he won the election to become a delegate to the Continental Congress. One year later, Ingersoll married Elizabeth Pettit. The couple would have three children together.

At the Constitutional Convention, he was a part of those favoring a revision of the Articles of Confederation, but eventually joined the side of those who wanted a plan for a new federal government. He attended every meeting, but rarely participated in the convention's debates.

Ingersoll held many positions after the new government was created. He returned to practicing law. He was a member of Philadelphia's Common Council in 1789. He served as attorney general of Pennsylvania from 1790 to 1799 and again from 1811 to 1817. In between his terms as attorney general, he became Philadelphia's city solicitor from 1798 to 1801. He was U.S. district attorney for Pennsylvania from 1800 to 1801. Because he saw the election of Thomas Jefferson in 1800 as a "great subversion" in 1812, he ran unsuccessfully for Vice President as a Federalist. From 1821 to 1822, he sat as presiding judge of the Philadelphia district court.