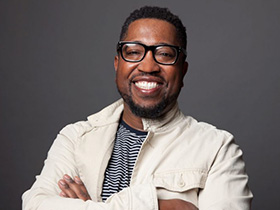 Major Jackson draws inspiration from his Philadelphia upbringing to write his volumes of poetry.

Poet Major Jackson was born on September 9, 1968, in Philadelphia, Pennsylvania and is the son of Levorn Gregory Spann and Gloria Ann Matthews. While growing up, he lived with his grandparents and eventually attended Philadelphia's Central High School. After graduation, Jackson moved on to Temple University, where he earned a BS in accounting.

In 1992, Jackson became the Finance Director of the Painted Bride Art Center. Located in downtown Philadelphia, the Bride offers all varieties of artists the chance to showcase their work. After a year servicing as the Bride's Finance Director, Jackson moved on to the position of Poetry Curator, which provided him an opportunity to interact with emerging and established poets. Jackson booked members of the Dark Room Collective, a group of aspiring African American writers, to read their work at the Bride, and Jackson became a member of the organization in 1994. That same year, he received the $50,000, two-year Pew Fellowship Award, providing him with both time and money to write. Jackson left the Bride in 1997 attend graduate school at the University of Oregon, where he graduated from in 1999 with an MFA in Creative Writing.

Jackson published his first book of poetry, Leaving Saturn, in 2002. This four-part collection of poetry draws from his life experiences. In a review of the book, Bobbi Booker of the Philadelphia Tribune commented that Jackson's poems "hauntingly reflect urban decay and violence, yet at the same time they rejoice in the sustaining power of music and the potency of community." The collection begins with the poem "Urban Renewal," which, among other things, examines and illuminates details of his life in Philadelphia. During an interview with Robert Stewart for New Letters Magazine, Jackson discussed the Philadelphia he grew up in and the aim of his poems to correct the reputation of Philadelphia as being just a "ghetto" to be dismissed: "I set out to complete and maybe even challenge to some extent the portraits that we inherit...and maybe give a more textured feel for the people of whom I grew up with."

Leaving Saturn was a finalist for the National Book Critics Circle Award in poetry and also received the Cave Canem Poetry Prize for a first book of poems.

With urban living continuing to influence his work, Jackson's second book, Hoops, was published in 2007 and also deals with subjects of adolescent hardships and inspirational figures. The final section of the book is composed of "Letter to Brooks," a 15-part poem written in rime royal. Addressed to the late African American Poet Laureate Gwendolyn Brooks, whom Jackson met while working at the Painted Bride, the poem not only honors Brooks and her work, but it also speaks of the world that Brooks left behind after her passing in 2000. During one section of "Letter to Brooks," Jackson replicates the style of Brooks' poem, "When You Have Forgotten Sunday," and paints a vision of a city landscape:

When you have forgotten (to bring into
Play that fragrant morsel of rhetoric,
Crisp as autumnal air), when you
Have forgotten, say, sun-lit corners, brick
Full of skyline, rowhomes, smokestacks,
Billboards, littered rooftops & wondered
What bread wrappers reflect of our hunger,

Jackson's strong grasp of the world around him as portrayed in his writing is partly influenced by Brooks. According to an article by Sally Pollak in Vermont's Burlington Free Press, "Jackson said he was interested in writing about Philadelphia as Brooks, in her poetry, had written about Chicago." Both Brooks and Jackson have a strong connection to their hometowns—a connection that can be seen in their poetry. Following the success of his first book, Hoops was a finalist for a National Association for the Advancement of Colored People (NAACP) Image Award in the category of Outstanding Literature — Poetry.

Jackson's poetry has been featured in such literary magazines as American Poetry Review, Callaloo, The New Yorker, and Poetry He has taught at Xavier University of Louisiana, New York University, and University of Massachusetts-Lowell as the Jack Kerouac Writer-in-Residence.

His poem, "Urban Renewal XVIII," was selected for publication by Public Poetry Project of the Pennsylvania Center for the Book in 2010.

In 2010, Jackson's third book, Holding Company, was published, and Mark Jarman of The Hudson Review says "There is no doubt in my mind or ear that the poetry Major Jackson offers us in Holding Company—unashamedly lyrical, in flight from narrative, layered with allusion and homage—sounds different from any other being written today." This latest collection explores art, literature, and music as formidable forces in our lives, while invoking figures such as Constantine Cavafy, Pablo Neruda, Anna Akhmatova, and Dante Rossetti.

In 2013, Jackson served as editor for a collection of poems by Countee Cullen, a volume that highlights Countee's life and work.

At the time of this writing, Major Jackson lives in Vermont with his wife and children, where he works as the Richard Dennis Green and Gold Professor in English at the University of Vermont and is a core faculty member of the Bennington Writing Seminars. He also serves as the Poetry Editor of the Harvard Review.