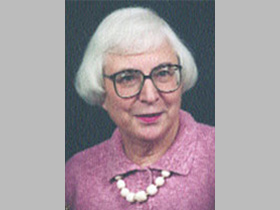 Writer and editor Jean Karl was born in 1927. After obtaining an education at Mount Union College, she embarked on a successful career as an editor, most prominently with Atheneum Publishers. She also wrote science fiction for young adults and books about children's writing. Jean Karl died in Lancaster, Pennsylvania, in 2000.

Jean Karl was born in Chicago on July 29, 1927, the daughter of William and Ruth Karl. Following her high school education, she matriculated at Mount Union College, earning her BAin 1949. She returned to Mount Union to serve as a trustee of the college from 1974 to 1977.

After her graduation from Mount Union College, Jean Karl began a very successful career in the field of publishing and editing. From 1949 to 1956, she worked as an editorial assistant and eventually an assistant editor at the Chicago publishing firm of Scott, Foresman. During this time she worked with the famous Dick and Jane readers. In 1956, she moved to New York and took a position with Abingdon Press as a children's book editor. In 1961, she was recruited by Alfred A. Knopf to become the director of children's books at Atheneum. While at Atheneum she founded Aladdin Paperbacks, the Argo Young Adult Hardcover book line, and the Books for Young Readers Division. She retired from Atheneum in 1985, being honored by her firm with the creation of her own imprint, Jean Karl Books.

Karl not only edited works for children, but also wrote several as well. In 1981, she published But We Are Not of Earth, a tale of orphans who use mental powers to explore the universe. Virginia Hamilton wrote in the New York Times that Karl "tells a smooth tale; in the process, she makes us wonder." She also wrote The Turning Place: Stories of a Future Past and Beloved Benjamin is Waiting.

She was also active in her profession. In 1970, she published a book about children's literature, From Childhood to Childhood: Children's Books and Their Creators. B.J. Shute quotes her in the New York Times as writing, "there is no reason for any author think that what will just do will ever be good enough" though he does take her to ask for "underestimat[ing] the ability of the so-called 'underprivileged' child to relate to almost any theme." She also wrote the clearly-titled How to Write and Sell Children's Picture Books in 1994. Karl was an active member of the American Association of Publishers, serving on the "Freedom to Read" committee and on the executive board of the General Trade Division. She also served the Children's Book Council as its president.

Jean Karl died in a hospice in Lancaster, Pennsylvania, on March 30, 2000.