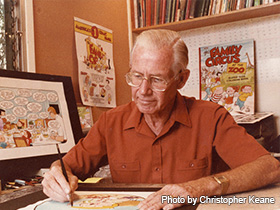 Born in Philadelphia on October 5, 1922, Bil Keane was a self-taught cartoonist who was best known for The Family Circus. His family, consistedof wife Thel (married in 1948), sons Neal, Glen, Christopher, and Jeff, and daughter Gayle, were his inspiration. He died on November 8, 2011 in his home.

William (Bil) Keane was born on October 5, 1922, in Philadelphia, Pennsylvania, and he grew up to attend Northeast Catholic High School. It was during these years that Keane formed his artistic style by reading and mimicking the cartoons in the New Yorker magazine. During school he would draw caricatures of his teachers for amusement. Keane's early years proved to be essential in providing him with a start.

While in eighth grade, Keane had his first cartoon published in a newspaper. On May 21, 1936, the Philadelphia Daily News ran one of his works on its amateur page, paying the aspiring cartoonist $1 for his efforts. Around this same time, young Keane started working with his friends on a satirical magazine called The Saturday Evening Toast. It was at this point that Keane became the man "Bil Keane" who we know today, dropping the second "l" because he wanted to be different.

After high school, Bil Keane worked as a messenger for the Philadelphia Bulletin before joining the army in 1942 during World War II. During his service, Keane continued to hone his skills. He drew for Yank magazine and also created the series At Ease with the Japanese for the Pacific Stars and Stripes while stationed in Tokyo, Japan.

Upon his return to the United States in 1945 after the end of the war, Keane went back to working for the Bulletin drawing non-daily "spot comics" and caricatures for the paper's entertainment section. Keane also started working on the Sunday paper, drawing a weekly strip entitled Silly Philly, a comic featuring a William Penn-based kid and his adventures. He also editing the weekly "Fun Book" supplement.

The seeds for The Family Circus were planted in 1948 when he married Thelma Carne. He had met his Australian bride while abroad during the war. Together they moved to Roslyn, Pennsylvania, to start their life together. However, the first Circus cartoon would not be created for another twelve years. Prior to that, Keane continued to cartoon and illustrate. In 1954, he started writing and drawing Channel Chuckles, a television humor cartoon that ended up being distributed for twenty-three years. In those intermediary years, Keane also sold single-frame "gag cartoons," like those he grew up imitating from The New Yorker, to many major magazines of the time. In 1958, Keane quit the Bulletin and moved his wife and five kids to Arizona, where he still resides today. Over the next two years Keane worked on Channel Chuckles and his other cartoons from home with his family under foot. In February of 1960, the first Family Circus cartoon was published under the name The Family Circle. It was called the Circle for six months until the magazine of the same name objected. The cartoon then became The Family Circus, as it is still known today.

Based on his life at home, The Family Circus followedthe daily lives of Bil, his wife Thel, and their children, Billy, Jeffy, Dolly, and P.J. Keane's goal with The Family Circus was to mimic the every-day life of the average American family. He admitted that reader laughter was not his primary goal. If the reader reflects, relates, and simply smiles then Keane feltthat he haddone his job. Since its humble beginnings in 1960, The Family Circus has spawned well over sixty books, totaling more than fourteen million paperback copies in print, and three animated specials, A Special Valentine with The Family Circus (1978), A Family Circus Christmas (1979), and A Family Circus Easter (1982), all of which were considered successes. In 1982, the National Cartoonists Society awarded Bil Keane with the Reuben Award as the "Cartoonist of the Year" for his work.

In his real life, Bil Keane hadfour sons, Neal, Glen, Christopher, and Jeff, and a daughter, Gayle. His son Jeff inkedand coloredThe Family Circus based on Keane's sketches and was the heir apparent to his father's legacy. His wife Thel was his editor and consultant. Glen is an animator at Disney and has had a hand in the creation of Ariel (The Little Mermaid), The Beast (Beauty and the Beast), Pocahontas, and Tarzan.