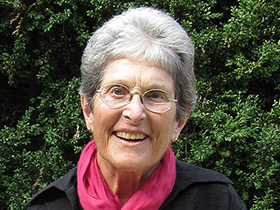 Germantown native Maxine Kumin has published numerous books of poetry, including Connecting the Dots and Up Country, for which she was awarded the 1973 Pulitzer Prize.

Maxine Kumin was born in Philadelphia on June 6, 1925. She attended Radcliffe College, receiving her BA in 1946 and her MA in 1948. In 1961, she began her teaching career as an English instructor at Tufts and has since held appointments at many American colleges and universities. In 1957, she began writing seriously and published her first book, Halfway (1961). Her collection of poems Up Country: Poems of New England(1972) won the 1973 Pulitzer Prize. She was selected as the Poetry Consultant to the Library of Congress in 1981, and later as the Poet Laureate for the State of New Hampshire in 1989.

In the opening sections of her memoir, Inside the Halo and Beyond: The Anatomy of a Recovery, Maxine Kumin reveals her lifelong affiliation with the state of Pennsylvania. She reminisces, "I've always been a jock all my life, from my adolescent days working out in the Broadmoor Pool in Philadelphia." Her active childhood revealed Kumin's fascination with physicality, youthful experiences, and memories of the past, all themes that would inspire much of her verse. Kumin's writing frequently draws from her Pennsylvania roots, a relationship between writing and personal history that began at birth.

Maxine Winokur was born in Philadelphia on June 6, 1925, and was raised by Jewish parents, Peter and Doll Winokur, in Philadelphia's Germantown neighborhood. She attended Catholic school as a child, an experience that affected her life and work. "In kindergarten at the Covenant Sisters of Joseph, conveniently next door to the house I grew up in," she writes in Inside the Halo and Beyond, "I was told stories of martyrdom and saints...[which] reinforced what I already knew from observing my father's dedication to work: one must be prepared to endure every hardship to be saved. In suffering, seek salvation, was the message." The importance of childhood memories shines in her early poem "Halfway":

As true as I was born into
my mother's bed in Germantown,
the gambrel house in which I grew
stood halfway up a hill, or down,
between a convent and a mad house.

These experiences in Germantown were life-shaping events—in her memoirs, Kumin remembers them vividly 70 years after—and memories of a youth that would profoundly influence her writing as an adult.

She left Philadelphia to attend Radcliffe College in Cambridge, Massachusetts, where she studied literature and history; she earned her BA in 1946 and her MA in 1948. During her undergraduate years at Radcliffe she met Victor Kumin, an engineering graduate from Harvard University on leave from the Army, and they married in 1946. Kumin's college education exposed her to the literary world, but she would discover her own passion for writing while attending a poetry workshop conducted by John Clellon Holmes at the Boston Center for Adult Education. Then she began to write more seriously and published her first poetry collection, Halfway, in 1961.

Kumin's career blossomed during the late fifties and early sixties. A year after attending Holmes's workshop, she began teaching English at Tufts University. Beginning with the publication of Halfway in 1961, Kumin published two poetry collections, two novels, and sixteen children's books before the end of the decade. This creative productivity culminated in the publication of Up Country: Poems of New England, which won her the Pulitzer Prize in 1973. Depicting the rural lifestyle in New England, Up Country is representative of Kumin's pastoral poetry. Country life and an appreciation for the natural world are themes that dominate the collection. Kumin's affection for the rustic landscape resonates in most of her poetry and prose, and it is generally regarded as one of the most appealing aspects of her work. Kumin's 1992 collection of poems, Looking for Luck, received the Poets' Prize, and her career achievements in writing have earned her a variety of awards and recognitions: the Aiken Taylor Award for Modern Poetry, the American Academy of Arts and Letters Award, the Sarah Josepha Hale Award, a National Endowment for the Arts grant, and fellowships from The Academy of American Poets and the National Council on the Arts.

Kumin's illustrious writing career is complemented by her lifelong commitment to education and community service. After leaving Tufts University in 1968, Kumin served as a guest lecturer at a number of colleges and universities during the 1970s and 1980s, including Columbia, Brandeis, Princeton, Bucknell, and the Massachusetts Institute of Technology (MIT). She was selected as the Poetry Consultant to the Library of Congress in 1981, but resigned in protest to the racial inequalities present in the institution. From 1989 to 1994 she served as Poet Laureate for the state of New Hampshire, and in 1995 she was chosen as Chancellor for the Academy of American Poets.

In 1976, Kumin and her husband purchased a large farm in the New Hampshire countryside, a fitting reward for a Pulitzer Prize-winning pastoral author. They live on that farm to this day, where they breed Arabians and quarter horses. The setting has inspired many of Kumin's essays on nature, ecology, and environmental awareness, notably 1987's In Deep: Country Essays. In 1998, at the age of 73, Kumin suffered a near-fatal back injury while tending to one of her horses; her neck and many of her ribs were broken. She has since recovered, and her experience rehabilitating from her injuries motivated her to write Inside the Halo and Beyond: The Anatomy of a Recovery (2001).

In 2003, her poem "Sisyphus," from Selected Poems (1997), was selected for publication by the Public Poetry Project of the Pennsylvania Center for the Book.

Kumin is celebrated for her ability to translate personal narrative into verse, exposing her interior to her audience's exterior, whether that interiority is located in New England's country landscapes or the intensive care unit.

Her more recent works include Where I live: New & Selected Poems 1990-2010, a 2011 Los Angeles Times Book Award winner, and Oh Harry! Her poems have also recently appeared in journals such as The New Yorker and The Writer's Almanac. She continues to write poetry and children's books dealing with nature, farming, and the environment to this day, and she resides in New Hampshire on her farm with her husband.