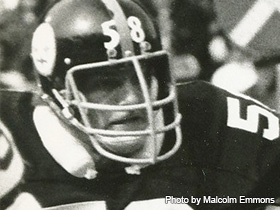 Hall of Fame linebacker Jack Lambert played for the Steelers from 1974 to 1984.

Born in 1952 in Mantua, Ohio, Jack Lambert was destined to be an athlete. He played basketball, baseball and football in high school. When he went to college at Kent State, he focused on football; there he played middle linebacker. In 1974, the Pittsburgh Steelers drafted him for the same position. Lambert played an essential role on Pittsburgh's "Steel Curtain" defense and is known for his intense playing and upstanding character. Within his ten-year career, he earned four Super Bowl titles with Steelers. At the end of the 1984 season, Lambert retired and now spends his time with his family.

On July 8, 1952, a football legend was born. John Harold Lambert was the proud son of Jack Lambert Sr. and Joyce Brehm; born and raised in the small town of Mantua, Ohio. His parents divorced when he was only two-years-old, and he was raised by his mother and visited with his father on the weekends. Lambert was groomed to be an athlete. He spent his summers working on his grandfather's farm; this really gave him what his mother calls "Farm boy strength." Lambert attended Crestwood High, where he played football, basketball, and baseball, earning nine letters in those sports. He could have had a great future in any of the three sports, but his heart was with football. His famous "smile," missing his front teeth, however, was not from a football injury, but from a basketball incident. In a high school basketball practice, he collided with a teammate and his teeth were knocked out. His mother said that he was very sensitive about it at first. From there, nicknames like "Dracula in cleats" started and followed him through his football career.

Lambert attended college at Kent State, weighing in at only 187 pounds as a freshman. First, Lambert was placed as a defensive end, but by the end of his sophomore year, he moved to middle linebacker. That move was the greatest move of his life. In 1972, Lambert was awarded the Mid-Atlantic Conference (MAC) Defensive Player of the year and also won the MVP as a junior at the Tangerine Bowl. After having so much success with Kent State's Gold Flashes, Lambert was sure to be scouted by the pros.

The Steelers had their eye out for Lambert, but "questioned where does one put a skinny 6'4", 220 lb. kid?" When reviewing old scouting files on Lambert, Art Rooney Jr. recalls Lambert as "intense, great nose for the ball, needs to add weight..." Rooney's cousin Tim was actually the one who called attention to Lambert after a visit to a Kent State football practice. The fields were too muddy to practice on, so they played in the parking lot instead. In Bill Chastain's book Steel Dynasty: The Team That Changed the NFL, it is recorded that, "on one particular play Lambert tried to tackle a ball carrier and dove on the parking lot. In the process he absorbed a painful dose of cinders to his body." This is a perfect example of his intense character.

In 1974, the Pittsburgh Steelers drafted Jack Lambert, number 58, as their second—round pick for middle linebacker. The 1974 draft was the beginning of the Steel Curtain dynasty for the Steelers. The 1974 draft was one to remember for the Steelers, picking up not just Jack Lambert, but also Hall of Famers Lynn Swann, John Stallworth, and Mike Webster. Chuck Noll, head coach of the Steelers, refers to himself as "lucky" when it comes to drafting. In reference to drafting, the book The Pittsburgh Steelers: The Official Team History, quotes Noll: "generally, what we'd like to do was to get good athletes, good football players, good people, and good team players. [...] We had to get them together and work with them and see what happened." Lambert was the only rookie to play on the Steel Curtain defense in 1974. Also in the same year he was named the Defensive Rookie of the Year, and led the team in tackles. With Lambert on the team, the Steelers defense was able to do things they had never been able to do before; things other teams would not dream of doing. He could take on anyone. He brought fire to the team, but discipline to the line, calling all of the plays as they set up. In The Pittsburgh Steelers: The Official Team History, a caption under a picture of Lambert reads, "A quarterback's worst nightmare: one-on-one with Jack Lambert." From 1974 to 1984, no one was a more devastating middle linebacker than Lambert.

Lambert and the Steel Dynasty went on to win four Super Bowls (IX, X, XIII, and XIV) in 1974, 1975, 1978, and 1979. One of the most memorable moments for fans and teammates was in Super Bowl X. Pittsburgh's kicker, Roy Gerela, was called to kick a 33-yard field goal and missed it. In Bill Chastain's book, The Steel Dynasty: The Team that Changed the NFL, it is written that, after that play, "[Cliff] Harris taunted the Steelers kicker by patting him on the helmet following the miss. Jack Lambert, who was on the field—goal team, didn't find any humor in the Cowboys safety's act and slung him to the ground." That incident alone shows the type of character that Lambert brought to the field; he stuck up for his teammates. He is one to stick up for what is right. He used his popularity of sports superstar to influence kids. In a Sports Illustrated article, "A Rose by Another Name," Lambert says "I read about sports figures who say the idea of their having an impact on kids is overrated [...] we have a responsibility, and if I can keep one kid from going on drugs I've accomplished something."

In addition to earning four Super Bowl rings, Lambert has many other honors to his name. He was named Steelers MVP twice (1976 and 1981), named NFL Defensive Player of the year twice (1976 and 1979), All-Pro seven times, nine straight Pro Bowls, and inducted into the Hall of Fame in 1990. After playing eight years in high school and college and ten years in Pro, Lambert retired after having a toe injury that kept him out most of the 1984 season.

The first year after retirement was difficult watching the team; he has said, however, that each year it gets easier to watch. Currently, Lambert is an active family man. He lives in the small town of Worthington, Pennsylvania with his wife, Lisa, and four children: Lauren, Elizabeth, John, and Ty. He is busier than ever. In Pittsburgh Steelers Men of Steel by Jim Wexell, Lambert said, "I enjoy so much watching the kids play. I wish I had more spare time, as far as being able to go golfing or fishing or whatever I want to do, but in the evening it's time to run the kids." For now, Lambert tries to stay out of the limelight and keep public appearances to a minimum.