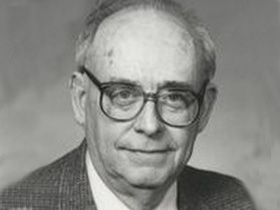 Arthur Lewis, Jr., was a professor at Penn State.

Born in 1920, Arthur O. Lewis became an editor who brought recognition to the scholarly field of Utopian Studies. During his entire career at Pennsylvania State University, Lewis created works such as Of Men and Machines (1963) that shed light on the importance of society defining itself in general terms. Through the use of hard work and determination, Lewis birthed a new appreciation for utopian and American society. Lewis' contributions to Pennsylvania State's Humanities program and Library collection will be recalled for years to come. Lewis died in 2009 at his home in State College.

Arthur Orcutt Lewis Jr. was born on October 8, 1920, in Wellsville, York County, to his father Arthur Orcutt Lewis Sr. and mother Janet Sanderson Lewis. Young Arthur grew up in Wellsville with his parents, his sister Janet, and two brothers, Edward and James. Lewis was enrolled at Harvard University in 1936. In 1940 and 1942 respectively, Lewis earned BA and MFA degrees in English at Harvard University (referred to by the University in traditional Latin as AB [atrium baccalaureus] and AM [atrium magister] degrees). Shortly after graduating from Harvard, Lewis enlisted in the United States Signal Corps and served as a Staff Officer, Classification Specialist, Assignment Specialist, and Training Officer. During 1945, he married Celeste Cecile Juneau during a short military leave. Before the end of his service in 1946, Lewis reached the rank of First Lieutenant.

In 1948, two years after finishing his military service, Lewis moved to State College, Pennsylvania, where he became a Graduate Assistant in English Literature at the then-Pennsylvania State College. After more education, Lewis joined the Pennsylvania State College staff in 1950, and earned his PhD in English shortly thereafter in 1951. Over the next decade, Lewis would serve as the Assistant to the Head of the English Department, until he was promoted to the status of Professor in 1960. During this same year, Arthur Lewis became the Associate Head of the Department of English.

After earning the title of Associate Head of the Department of English, Lewis' career as a well-known writer began. His first published anthology, Of Men and Machines, went to press in 1963. This piece of work established Lewis as a science fiction writer and also as a professor who delved into the world of Utopian Studies. The later 1950s and 1960s saw a revolution in computer science and artificial intelligence (AI) technology. One such innovation, the List Processing Language (LISP) was developed in 1958. The capabilities of LISP involved the ability to program AI-like behaviors, such as SAINT, the first computer program to solve calculus-based problems. Machines' ability to solve these complicated symbol-based problems raised several questions at this time. One such question, as stated by Arthur Lewis in the preface of Of Men and Machines, is: "The problem resulting from that discovery is best posed as a question: Is man master or servant of the machine?" In an attempt to answer his own question, Lewis stated, "If the machine is to become our master, in any sense of the word, the fault is the fault of men, not the machines." Of Men and Machines, an anthology describing the relationship between man and machine, would go on to define the rest of Lewis' career in Utopian Studies.

A little under a decade after publishing Of Men and Machines, Lewis published his most well-known anthology American Utopias: Selected Short Fiction in 1971. This anthology was popular due to the increasing interest in Utopian Studies and other Humanities programs during this time. While Lewis was still teaching English classes, he often used this publication as a textbook to demonstrate the idea of a utopia relating to American culture. Using the publication as a textbook helped to spread the idea of utopia to students, as well as other acclaimed professors.

Perhaps the height of Arthur Lewis' career occurred during 1976 with the publishing of A Directory of Utopian Scholars. This work is a bibliography of all of the writers who took interest in utopian societies and how they are formed. Through Lewis' work, scholars who admired Utopian Studies came together to share ideas on the topic in the pre-Internet world. This group of scholars, along with Arthur Lewis, formed the National Society for Utopian Studies in 1976. Lewis was elected chairman of the National Society for Utopian Studies from 1979 to 1980, and once again from 1982 to 1984. In 1984, the society established the Arthur O. Lewis Award, given annually to a student who writes the best paper focused on Utopian Studies.

After the publication of A Directory of Utopian Scholars, the National Society for Utopian Studies and his English professions consumed his free time. Lewis, at this point in his life, compiled no more anthologies; however, he remained interested in the work of others. From 1982 to the time of his retirement from Pennsylvania State University in 1985, Lewis wrote twenty book reviews that were published in scholarly journals. After retirement, Lewis had eleven book reviews published by the year 2008 and continued to contribute to the scholars interested in Utopian Studies. In 2003, Pennsylvania State University Library made a special collection of Utopian Literature that Lewis collected throughout his years as a professor. The Library appropriately named the collection the Arthur O. Lewis Collection.

When Arthur Lewis retired in 1985, he remained in his home at State College, Pennsylvania. He continued to live happily with his wife Celeste, until his death on July 18, 2009.