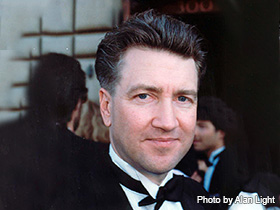 David Lynch attended Pennsylvania Academy of Fine Arts and is best known for his abstract films.

Born in 1946, David Lynch is a film director and painter, best known for his abstract films (short and long). He produced a number of short films, such as Six Men Getting Sick (1966) and The Alphabet (1968). Some of his most famous full length films are Eraserhead (1976) and The Elephant Man (1980). He has won a number of awards, such as the Grand Prize in the Avoriaz Fantastic Film Festival for The Elephant Man and the Best Director Award at the Cannes Film Festival for Mulholland Drive (2001). He has also been nominated for four Oscars.

David Keith Lynch was born in Missoula, Montana, on January 20, 1946, to Donald (a US Department of Agricultural [USDA] research scientist) and Sunny (a language tutor). He has two younger siblings named John and Martha. Because his father was a USDA research scientist, Lynch moved to many different places throughout his childhood. However, he was raised mostly in the Pacific Northwest. He was sort of the "all-American boy." He says about his childhood, "We were in the woods all the time. I'd sorta had enough of the woods by the time I left, but still, lumber and lumberjacks, all this kinda thing, that's America to me." During his childhood he became an Eagle Scout and was an usher at John F. Kennedy's presidential inauguration.

Lynch knew from the beginning that he wanted to study art, and enrolled in the Corcoran School of Art in Washington, D.C. in 1963. Lynch, however, did not like the academic environment. Later Lynch moved to Boston, Massachusetts, where he enrolled into the School of the Museum of Fine Arts in 1964. Lynch did not like school there, either, and quickly dropped out. He moved to Europe to study, in 1965.

While in Europe, Lynch studied with expressionist painter, Oskar Kokoschka. He stayed for only 15 days and then returned to the United States to continue his studies. He settled in Philadelphia, Pennsylvania, and attended the Pennsylvania Academy of Fine Arts in 1966. This is where Lynch began his experimentation with film. Lynch began making films, "but only because I wanted my paintings to move," he stated.

Philadelphia was, unfortunately, a bad environment for Lynch. He needed to reflect on how he viewed the city and soon wrote his first short film, Six Men Getting Sick, in 1966. After creating this short film Lynch became more fascinated with humans and the negative parts of their everyday life. In fact, Philadelphia had a lot of influence on Lynch's artistic style. He says in an interview with the Inquirer about Philadelphia, "it is the sickest, most corrupt, decaying city filled with fear I ever set foot in in my life. I saw horrible things, horrible, horrible things while I lived there... I was only aware of this world of fear and art."

He next wrote and partially animated the film The Alphabet which received an American Film Institute Grant. While enrolled at the Academy, he met Peggy Reavey, whom he soon married and with whom he had his first child in 1968.

In 1972, Lynch started to focus on what would be his first feature film, Eraserhead. This film is about Lynch's own fears and anxieties of fatherhood, and also his disgust with the violent streets of Philadelphia. Eraserhead became an "instant cult classic." According to Thomas Caldwell, a graduate in cinema studies and a freelance film writer in Melbourne, Australia, Eraserhead is a nightmare vision of a world where men control all aspects of reproduction, turning sex into a mechanized process. The result is a world of industrial decay where life is more morbid than death itself." This film starred John Nance and caught the attention of Mel Brooks who wanted Lynch to direct his film, The Elephant Man (1980). Directing this film pushed Lynch into the Hollywood mainstream.

The Elephant Man is based on the story of a nineteenth century British deformed celebrity named Joseph Merrick. Merrick must wear a hood in public in order to avoid stares. Though Mel Brooks had a lot to do with the production of this movie, he did not want to be credited for fear that the movie would be viewed as a comedy. David Lynch wrote, directed, and even designed the sound for this film. The Elephant Man starred Anthony Hopkins, John Hurt, and Anne Bancroft. It was also nominated for an Academy Award for Best Picture and won other awards, such as the C??sar Awards and the Grand Prize Award for the Avoriaz Fantastic Film Festival.

After The Elephant Man, David Lynch directed his second Hollywood film. Dune, released in 1984, was adapted from a cult science-fiction novel by Frank Herbert. Dune starred Freddie Jones, Linda Hunt, and Virginia Madsen. The film was a disaster, and Lynch was ultimately denied the final cut. It was a difficult movie for Lynch, and though it got mixed reviews, most of them were negative. In an interview with Tim Hewitt, cited in David Lynch: Interviews, he says about Dune, "There's something wrong with that movie. I don't really know what it is, and I'm not certain you could 'fix'it. It's just too big, you know, and there's so much there. A lot of it I like, but a lot of it I don't like."

Kenneth C. Kaleta says in his biography David Lynch that the story of Twin Peaks is, "an American television product about an American small town with American values. Lynch is an American artist—product himself of the idealistic explosion of the sixties..." Some of the cast of Twin Peaks included Kyle MacLachlan, Lara Flynn Boyle, and Dana Ashbrook. The series won three Golden Globes and was nominated a total of thirty-one times for other various awards. Twin Peaks was and still is loved by many. Fans eagerly anticipate the Twin Peaks revival, expected 2017.

In 2008, a biography, One, in DVD form was released chronicling Lynch's life and thoughts behind his most recognized pieces.

David Lynch's focus is not only on film, but on many other aspects of art and writing. He is an author, musician, artist, producer, and actor. He has promoted other projects—including a series of interviews with everyday people and the release of his electric guitar improvisational soundscape album, The Big Dream (2013)—on his web site, DavidLynch.com. He is also an advocate for Transcendental Meditation as a treatment for trauma and supports this cause through the David Lynch Foundation.