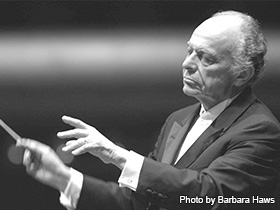 A conducting Wunderkind, Lorin Maazel has led most of the world's greatest symphony orchestras.

Born in France into a musical family, Maestro Lorin Maazel has had careers in conducting many orchestras, including the Vienna Philharmonic. He grew up in Pittsburgh, and his talents in conducting, playing the violin and composing music helped him study at University of Pittsburgh and lead him to involvement with the Pittsburgh Symphony Orchestra. His major composition is 1984, an adaptation of the George Orwell novel, and he made many appearances at concerts and shows all over Europe and the United States. He has moved back and forth from Europe and his homeland, saying that "anywhere is home when with music."

Lorin Maazel was born in Neuilly-sur-Seine, Paris on March 6, 1930. His father was a Russian Jew and his mother was of mixed Hungarian and Russian background. Soon after their marriage, they moved to the United States where Maazel spent his childhood in Pittsburgh. The Maazels were famous for their musical talents; for example Lorin's grandfather Isaac was a violinist for New York's Metropolitan orchestra, and his mother, Marie Barnet Maazel, founded the Pittsburgh Youth Symphony.

Maazel was dubbed "the musical prodigy" at age four. His acute sense of pitch and memorization skills shocked listeners and critics alike. The gifted, four-year-old Maazel started taking violin and conducting lessons from Vladimir Bakaleinikoff, he became interested especially in conducting. He received his first formal conducting lesson when he was seven. By the time he was eight, he conducted Schubert's Unfinished Symphony with the Idaho University orchestra. Olin Downes, a New York Times music critic at that time, watched Maazel's performance and reported that he had "an admirable beat-free, firm and communicative" style gave every cue perfectly and even did justice to the subtle nuances of the Schubert score. In 1933, Maazel conducted the Interlochen Orchestra at the International Exposition that took place in New York and amazed the world as a nine-year-old conducting prodigy. Joseph Weber, national president of the American Federation of Musicians, "declared him to be a genius, and said that he gave special permission that anywhere at any time the boy could conduct what orchestra he pleased." He was also a guest conductor at NBC Symphony at Arturo Toscanini's invitation when he turned eleven in 1941.

Lorin Maazel conducted the New York Philharmonic for the first time at Lewisohn Stadium in New York on August 5 1942 and had tours all over the United States with many talented orchestras including the Chicago Symphony. He made his debut album as a violinist when he was 15. Maazel continued his education by going to school and at the same time took music lessons from Vladimir Bakaleinikoff. He graduated high school at the age of 16 and went to University of Pittsburgh for a degree Languages and Philosophy from 1946 to 1950. In this time period, he joined the Pittsburgh Symphony Orchestra (SO) as a violinist, and became the leader of the Pittsburgh Fine Arts Quartet and the orchestra's apprentice conductor.

In 1951, Maazel went to study abroad in Italy as a Fullbright Scholarship student. He researched Baroque music especially Bach's, and studied conducting techniques at Berkshire Music Center in Lenox, Massachusetts. He showed progress with his learning as he conducted Stravinsky's work at the Berkshire Music Festival in 1953, and he had a successful debut performance on the Catania stage in Rome. Soon after, he became the darling of the European orchestras, appearing with many different European orchestras.

In 1960, Lorin Maazel conducted Lohengrin at the Bayreuth Festival and was acknowledged for his talent and career at the age of 30. Maazel was the youngest and the first American conductor to appear on the stage at Bayreuth. He was invited to return to Bayreuth afterwards to conduct in 1968 and 1969 as well.

Maazel performed with the Boston Symphony Orchestra in 1961, and again in 1963, Salzburg visiting Germany. In between 1965 and 1975, he was inaugurated as the general music manager of Deutsche Opera Berlin and top conductor of the Berlin Radio SO. Also during this time, Maazel formed a friendship with Herbert von Karajan, another great conductor of West Berlin.

Maazel was appointed to be the apprentice conductor of the New Philharmonic orchestra in London, helping Otto Klemperer from 1970 to 1972. He moved back to the United States in 1972 to become the Cleveland Orchestra's music director replacing George Szell. Around this time, he recorded "Porgy and Bess" by George Gershwin and received attention from fans for the song's success. 1976 saw Maazel become a permanent guest conductor of the French National Orchestra and, in 1982, Maazel became a permanent conductor and music director of Vienna State Opera. He consulted for the Pittsburgh SO from 1984 until 1988 when he led the whole orchestra as the musical director. During his eight year role as musical director, he also worked with the Bavarian Radio SO as a top conductor in Munich. After spending 1993 to 2002 in and out of Germany, he went to work with the New York Philharmonic as a permanent conductor replacing Kurt Masur.

He did many tours while he was with the New York Philharmonic, the most famous of which was the 2008 tour to Pyongyang, North Korea. This was the first appearance of an American Orchestra in North Korea. Music became diplomacy on February 26, when Lorin Maazel led the orchestra in renditions of the North Korean and United States national anthems, Dvorak's New World Symphony, George Gershwin's An American in Paris, and closed with the traditional Korean folk song "Arirang." This courageous musical project united Korean and American musicians, who, together, produced a technically brilliant performance. Shortly after the tour, Maazel said that he was moving on "with a tranquil heart and good feelings." New Yorkers still praise Maazel's performances, claiming them to be "100 times better than his predecessor."

Maazel's resume for the 21st century also boasts a stint as a music director for Arturo Toscanini's Philharmonic in 2004 and March of 2006, tours across Asia with Singapore SO, and the composition of his most famous opera, 1984, an adaptation of George Orwell's novel Nineteen Eighty-Four. The material of the opera was strongly encouraged by August Everding who was the leader of Bayern's SO and a good friend of Maazel when he was the music director at the same orchestra. The novel "1984," written in 1949, is about a totalitarian state of authority and power. Its libretto was written by Thomas Meehan and an English professor from Reading, PA, J.D. McClatchy. Meehan is a well known author who has written a script for a musical called The Producers. Maazel performed his own opera at the Loyal Opera House in London in May 3, 2005.

Maazel once said "No composer worth his salt likes his own music." "Hearing 1984, I was horrified from the first note. If you're introverted, as I am, it's embarrassing. The music has personal overtones you can't avoid. I come across as an anchored, together human being, and I'm none of these things. My wife put it very well. 'Hearing one's music performed is like hearing your diaries read out over the radio.'" But did what he heard surprise him? "It sounded exactly as I expected," Maazel said. "I haven't changed a note."

Maazel has conducted more than 150 orchestras and performed at more than 5000 operas and concerts. He was awarded an MIDEM special award for his many careers as a conductor, violinist, and composer at the World Music Exposition in January of 2006. He is regarded as one of the best maestros of the 21st century. He is known for playing the violin in nine of the Vienna Philharmonic's New Year's concerts, and is famous for conducting each while he played.

Maazel said that being musical director of the New York Philharmonic was "the ultimate position," and indicated no plan of retiring. His position has not prevented him from stepping in for ailing conductors, most recently James Levine of the Boston Symphony Orchestra in November 2009. Maazel has even mentioned considering "major positions" to work with young musicians. On October 2009, Maestro Maazel led the DC Youth Orchestra Program in a rehearsal and showed his hope and passion for the next generation in saying "Classical music is certainly not dead if young people like this are interested in keeping it going."

"I never thought conducting could be a career," Maazel insisted. "It became one. It's been a long and interesting road, and I've had a very full, rich and marvelous life doing things I wanted to do. I took four sabbaticals, learned many languages, traveled extensively, and had a very rich personal life."