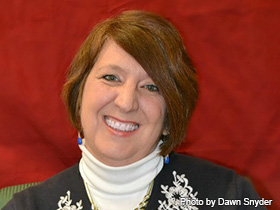 Marjorie Maddox Hafer directs the creative writing program at Lock Haven University and has written much poetry, including Weeknights at the Cathedral.

Born in Columbus, Ohio in 1959, Marjorie Maddox has published nine collections of poetry and over 450 poems, stories, and essays in journals, newspapers, magazines, and anthologies. A versatile and prolific writer, Maddox has amassed notable recognition of her work; her poetry collection, Local News from Someplace Else (2013), focuses on living in an unsafe world. She serves as a Professor of English and the Director of Creative Writing at Lock Haven University.

Marjorie Maddox was born in Ohio to William and Roberta Maddox in 1959. She studied literature at Wheaton College, with Beatrice Batson and Harold Fickett, receiving her BA in 1981. At the University of Louisville in Kentucky, she worked with author Sena Jeter Naslund and earned an MA in English with a creative thesis. She moved on to Cornell University to study with poets such as A. R. Ammons, Robert Morgan, Phyllis Janowitz, and Ken McClane, where she received the Sage Graduate Fellowship for her MFA in Poetry in 1989. She was also awarded the Robert Chasen Poetry Prize and an Academy of American Poets Prize.

Her success as a published poet began with the release of Nightrider to Edinburgh, an Amelia Chapbook Winner, in 1986. How to Fit God into a Poem was published as the 1993 Painted Bride Chapbook Winner, followed by Perpendicular As I (winner of the Sandstone Book Award) a year later. Her 2004 compilation, Transplant, Transport, Transubstantiation, was a runner-up (Brittingham and Felix Pollak Prizes), finalist, or semifinalist in 30 national competitions, including the Nicholas Roerich Poetry Prize, Vassar Miller Prize, and the Coffee House Press Poetry Prize. It was also the 2004 Yellowglen Prize winner.

The prolific Maddox explores many themes in her work, examining the divine and illuminating the body. With anatomical precision, she describes and animates organs, placing heart valves and pupils in fresh contexts in her poem "Tornadoes Up Your Windpipe" (from Perpendicular as I)—a poem that was selected for publication by the Public Poetry Project of the Pennsylvania Center for the Book in 2000.

Over 450 of her poems, stories, and essays have appeared in such journals, newspapers, magazines, and anthologies as Poetry, Crab Orchard Review, The Minnesota Review, Art Times, US Catholic, Midway Journal, and the anthology Dirt, published by The New Yinzer in Pittsburgh.

In 2005, Maddox and Jerry Wemple of Bloomsburg University edited the poetry collection Common Wealth: Contemporary Poets on Pennsylvania, published by the Pennsylvania State University (Penn State) Press. In addition, her short story collection, What She Was Saying, was one of three finalists for the 2005 Katherine Anne Porter Book Award and a semifinalist for Eastern Washington University's Spokane Fiction Book Award, Louisiana University Press' Yellow Shoe Book Award, Black Lawrence Press, and Leapfrog Press' Book Award (judged by Marge Piercy). She is also the author of two children's books from Boyds Mills Press: A Crossing of Zebras: Animal Packs in Poetry (2008) and Rules of the Game: Baseball Poems (2009).

Consistently recognized for her work, Maddox has received the 2000 Paumanok Poetry Award, the 2001 Redgreene Press Chapbook Prize (for When The Wood Clacks Out Your Name: Baseball Poems), an Academy of American Poets Prize, the Seattle Review's Bentley Prize for Poetry, a Bread Loaf Scholarship, Pushcart Prize nominations in both poetry and fiction, and Lock Haven University's 2012 Honors Professor of the Year and 2011 and 2012 Woman of Distinction nominations.

Her memoir essay, Going Exactly Where We Want to Go, is included in Fast Break to Line Break: Poets on the Art of Basketball (Michigan State University Press, 2012), edited by Penn State Professor and poet Todd Davis.

Maddox's recent published work, Local News from Someplace Else (2013), was a finalist for the Samuel French Morse Poetry Award, Kentucky Women Writer's Book Competition, Magellan Prize, Mammoth Books Poetry Award, and Ashland Poetry Press Prize; and a semifinalist for the Crab Orchard Poetry Award, and elsewhere. The Director of the Stadler Center for Poetry of Bucknell University and author of This Strange Land (Alice James Books, 2011), Shara McCallum, says this of the book:

Marjorie Maddox's newest book offers visions of disaster, tempered by a mother's hope. In taut language, these poems move into the center of familiar tragedies, often lifted from the news—9/11, school shootings, kidnappings, floods, and hurricanes—rendering each one personal. Local News from Someplace Else is a reminder that what separates us from destruction are sheer luck (or grace) and the insistence of life itself.

Currently, Maddox serves as a Professor of English and the Director of Creative Writing at Lock Haven University. She, her husband, and their two children live in Williamsport, Pennsylvania, birthplace of Little League and home of the Little League World Series. She is the great great-niece of baseball legend Branch Rickey, the Brooklyn Dodgers manager who helped break the color barrier by signing Jackie Robinson. For more information, visit marjoriemaddox.com.