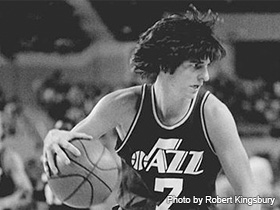 Peter Press Maravich was born on June 22, 1947, in Aliquippa, Pennsylvania. He graduated from Broughton High School in Raleigh, North Carolina, in 1965. In 1966, Maravich enrolled at the Louisiana State University to pursue a degree and play basketball. After completing a legendary career at Louisiana State University, Maravich played ten successful seasons in the NBA, and earned five trips to the NBA All-Star Game throughout his career. Maravich was inducted as a player into the Naismith Memorial Basketball Hall of Fame in May of 1987. Maravich died on January 5, 1988, in Pasadena, California.

Peter Press Maravich was born on June 22, 1947, in Aliquippa, Pennsylvania. A well-known local doctor, Dr. John L. Miller, delivered Maravich. Maravich was the son of a former professional basketball player and coach, Press Maravich, and Helen Maravich, both of Aliquippa, Pennsylvania. Moments before Maravich's birth, his father made a bet with the doctor, in which the doctor would pay the hospital bill if he delivered a girl. Obviously his father lost the bet, but was very happy to pay the hospital bill because he knew he had a son to follow in his footsteps. An Orthodox priest from St. Elijah the Prophet baptized Peter Press on June 24, 1947 in his home on Beechwood Avenue.

Measuring 6'5" tall, and over 200 pounds, it was obvious that Maravich was destined to be a basketball player. Since NCAA rules at the time prohibited first-year students from playing at the varsity level, Maravich was forced to play for LSU's freshman team from 1966-1967. During his freshman season, Maravich scored 43.6 points per game and led the team to a 17-1 winning season. Meanwhile, the varsity squad coached by Press Maravich finished the season with a losing 3-23 record. In his sophomore year as a Varsity player, Maravich began the greatest scoring drive in NCAA history, in which he averaged 43.8 points per game. During his junior and senior years, he averaged 44.2, and 44.5 points per game, respectively. With such an outrageous points per game average, Maravich was able to lead the nation in scoring each year. During his senior season Maravich scored 50 or more points in ten of his 31 games, which enabled him to set the NCAA record for most points and the highest scoring average in a single season.

In 1970, Maravich was named College Player of the Year. Of significant importance is the fact that Maravich set all of the NCAA scoring records without the benefit of the three-point basket, which was not introduced into college play until the 1986-1987 season. Had there been a three-point line during Maravich's reign, it is speculated that he would have averaged well over 50 points per game. Despite being such a successful and standout player, Maravich did not impact LSU as much as people assume he did. During Maravich's stint, LSU earned only a modest record of 49 wins, and 35 losses. Naysayers believed that Maravich was out to play for himself because every team he ever played for commonly had a losing record, which is where his nickname came from. People commonly referred to Maravich as "Pistol Pete" because they viewed him as a gunslinger rather than a team player.

After completing a legendary career at Louisiana State University, Maravich played ten successful seasons in the NBA, and earned five trips to the NBA All-Star Game throughout his career. In 1970, the Atlanta Hawks drafted Maravich as the third round overall pick. As a result of his $1.9 million contract, Maravich was not well received by the veteran players of the Atlanta Hawks. Despite the controversy, Maravich was still able to have an immediate impact on the team during his Rookie season. He managed to average 23.2 points per game, which was good for ninth in the overall league. As a result, he was named to the NBA All-Rookie Team. Much like his career with LSU, Maravich's career with the Hawks was characterized by highly entertaining play and big numbers, but mediocre seasons and less than average team records.

Maravich was traded to the New Orleans Jazz (now the Utah Jazz) four years later on March 3, 1974. On January 22, 1980, Maravich went on to sign with the Boston Celtics. As a Celtic, Maravich was forced into retirement as a result of a bad knee. He finished his ten-year career with an average of 24 points per game. Despite leaving the New Orleans Jazz on bad terms, the team overcame their grievances and retired his uniform number in 1985. In May of 1987, one year before his death, Maravich was inducted as a player into the Naismith Memorial Basketball Hall of Fame. His induction made him the youngest player ever to be inducted into the Hall of Fame. Career highlights leading up to his induction included All-America First-Team in 1968, 1969, and 1970; College Player of the Year in 1970; NBA All-Star in 1973, 1974, 1977, 1978, and 1979; and NBA 50th Anniversary All-Time Team in 1996.

After the NBA, Maravich went on to become a Christian and traveled the country to share his newfound faith. Despite such a legendary career, Maravich stated that he wanted to remembered as a Christian, not as a basketball player.

On January 5, 1988, Maravich was being filmed for a series of messages titled "Focus On The Family," for a religious radio ministry. After finishing a series of half-court games at a church in Pasadena, Maravich was quoted as saying, "I need to do this more often. I'm feeling really good." After completing his sentence about feeling really good, he turned to walk away and fell unconsciously to the court.

Maravich was quoted during an interview in 1974 as saying, “I don't want to play ten years in the NBA and then die of a heart attack when I'm 40." Maravich is buried at the Resthaven Gardens of Memory and Mausoleum in Baton Rouge, Louisiana. It was later discovered that Maravich had a heart defect in which he had only one fully developed coronary artery. This illness is so rare that it is barely ever mentioned, and it went undetected from Maravich's birth until his death. Maravich is survived by his two sons, Jaeson and Josh, who both play basketball at the collegiate level. Jaeson is currently attending William Carey College, and Josh is currently attending Louisiana State University.