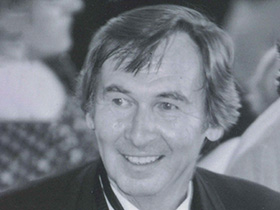 Paul Martin, author of Rooms of the Living (2013), lives in Ironton.

Poet Paul Martin is from Walnutport, Pennsylvania. His poetry focuses on the Slovak experience in the US, his own life in Pennsylvania, and reactions to the Vietnam War. Martin has written several poetry collections. His book Closing Distances (2009) has been a National Poetry Series finalist twice, and Rooms of the Living (2013) was a co-winner of the 2012 Coal Hill Review Chapbook Prize. Martin has also been awarded the Pennsylvania Council of the Arts Fellowship twice, and his poems continue to be published in many literary journals and anthologies.

Paul Martin was born in 1940, the son of Michael and Mary Martin, both of whom were immigrants from Czechoslovakia. He grew up in Walnutport, Slatington, and Palmerton, small towns along the Lehigh River in eastern Pennsylvania. After graduating from Palmerton High School, Martin attended St. Francis College in Loretto, Pennsylvania, and earned his Bachelor of Arts, before earning his Master's degree at Niagara University in Niagara Falls, New York.

Paul Martin became interested in poetry when he was in high school and heard for the first time the poetry of Carl Sandburg and Walt Whitman. After this experience he felt for the first time "power and relevance of poetry" in his life, and began as he puts it, "just trying to write good poetry." He was eventually published in Pulpsmith and gained attention from other journals soon after, leading to publications of his own books of poetry.

Many of his poems are about the place where he grew up and continues to live: The Lehigh Valley, what he calls "the place of childhood, family and memory." Paul Martin also is chiefly interested in his "Slovak heritage, family, and the mysteries of daily life," which, he says, continually intrigue him and inform his work. His poetry also laments the death of a former way of life, in which Slovak was spoken by the people who built the community he lived in. Martin says, "I want them, their language, culture and sacrifices to be remembered." One of example of his interest in Slovak culture in Pennsylvania comes from his poem "Closing Distances," where Martin muses about his grandparents and the town they lived in:

I'd like to think the town they're buried in
grows lush, abundant gardens,
that the mayor, a happy, shambling man,
makes his way from one to the next, pulling scallions,
drinking beer, talking with blue-shirted men who lean on their shovels
or adjust the fine spray of the nozzle.
But all that grows is the number of stones
in the cemetery overlooking the town, the ground
bare, rutted, as hopeless as the factory now
and at 10:15 Mass where the old Slovaks
filled the church with garlic thicker than incense
and sad, passionate voices that shook the simpering marble faces
of saints, their well-dressed sons and daughters
scatter themselves through the pews
and sing such a thin, bloodless song
the church feels big as a cavern.

Martin's poetry not only celebrates his heritage, but acts as an elegy for a quickly disappearing way of life. He might be considered a national poet and admits being heavily influenced by the great Polish poet and Nobel Laureate, Czeslaw Milosz, because of his "strong moral compass, his "passionate pursuit of the Real" through the rubble of the twentieth century." The "rubble of the twentieth century" also includes life in the United States during the Vietnam War era, which Martin recreates and expounds in his poetry. "Watching the News" is one on the subject:

From out there, the news keeps coming
focusing here in front of the couch:
mountains of shoes and eyeglasses;
the limousine turning the corner, forward,
backward, slowed down, enlarged, and stopped;
that naked girl running toward me,
her back aflame with napalm—
these pictures that make it difficult to mow the lawn
to replace the burned bulb or the brick

The ability to conjure memory in verse is one of Martin's greatest assets. He is the recipient of two poetry fellowships from the Pennsylvania Council of the Arts, and his full length manuscript, Closing Distances (2009), has twice been a finalist in the National Poetry Series.

His poem "The Delicate Boat," from Green Tomatoes (1990), was selected for publication by thePublic Poetry Project of the Pennsylvania Center for the Book in 2003.

Martin has written severalbooks, including Walking Away Waving (1998) and Morning on Canal Street (2005). Hiscollection Rooms of the Living (2013) was a co-winner of the 2012 Coal Hill Review Chapbook Prize. His poems have been published in numerous journals—including, America, Boulevard, Commonweal, 5 AM, New Letters, Poetry East, Prairie Schooner, River Styx, Southern Poetry Review, and Texas Poetry Review—and anthologized by several publications.

At the time of this writing, Paul Martin teaches part-time and continues to write poetry, saying that his writing "is a way of staying attentive to life, a way of staying alive." He lives in Ironton, Pennsylvania, with his wife Rita, and they have three children: Elizabeth, Susan, and Kenny.