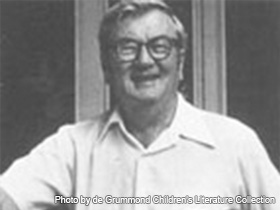 Children's author Robert McClung, best-known for his stories dealing with science and the natural world, was born in Butler in 1916.

Robert McClung was born in 1916. He graduated from Princeton University, and began his career as a copywriter. He served in the Navy and eventually earned his master's degree in zoology. His books focus on nature and animals and are very highly acclaimed for their ability to make these subjects interesting for children. McClung died in 2006.

Robert M. McClung was born in Butler, Pennsylvania, on September 10, 1916. He was son to Frank A McClung, a banker, and Mary A(Goehring) McClung. Robert's love for animals started early on in his childhood with his collection of butterflies, moths, and other animals of the wild. On July 23, 1949, Robert married Gale Stubbs, a former editor. Robert and Gale went on to have two sons.

After graduating from Butler Senior High School in 1934, McClung enlisted in a preparatory school for boys, the Northwood School, near Lake Placid, New York. After spending a year there, Robert attended Princeton University where he majored in biology. Upon graduating from Princeton in 1939, he volunteered at the American Museum of Natural History in New York City. To support himself, McClung used his spare time working with the surrounding youths at the Stuyvesant Neighborhood House. In 1940, he took a job with McCann, Erickson, Inc., an advertising agency in New York City, as a copywriter. He continued to work there until 1947 with a five-year gap spanning from 1941-1946 when he joined the V-7 program of the USNaval Reserve.

After being discharged from the Navy, McClung took writing courses at New York University in the evenings while working his advertising job during the days. During this time he wrote his first book, Wings in the Woods, publishing it in 1948. In 1947, he decided to go back to school and start his graduate work at Cornell University. His graduate work focused on zoology and natural history and he had hoped to eventually work with zoo animals. After completing his master's work in zoology in 1948, McClung took a job as an assistant in the animal department at the Bronx Zoo. From the years of 1952-1955, McClung stayed at the Bronx Zoo, but now worked as a curator for mammals and birds. While working with these animals, his love of the animal world increased.

In 1955, he decided to take a break from the corporate world and to work as a freelance writer and illustrator of children's books. He continued to do this for three years until he took up a job with the National Geographic Society, where he worked as an editor. Since he was not allowed to work on his own writing there, McClung quit in 1962 and moved back to Amherst, Massachusetts, where he continued his freelance work. For many years after this, he was very active in local politics and conservation efforts. His big break finally came in 1966, when he won his first award, the Eva L. Gordon Award from the American Nature Study Society for outstanding achievement in nature literature.

"McClung may be the best interpreter of natural science now writing for young people," Don Lessem praised McClung's writing in Appraisal: Science Books for Young People. Robert McClung uses a unique blend of fiction and facts in his stories to present a compelling, yet informational story for children of all ages. Many others have attempted this feat, but McClung has been praised widely for his success. His writing is only the beginning of what makes the story so compelling. Although not everyone agrees, most critics insist that his illustrations also add a depth and feel to the stories that draw the reader in attach them to the story. Lost Wild America: the Story of Our Extinct and Vanishing Wildlife(1969) and The True Adventures of Grizzly Adams(1985) are two of his better-known works. The latter of the last two stories was McClung's only biographical story. He was praised highly for this because he not only told a good story, but also presented a side of Grizzly Adams that most people didn't know.

McClung won his first award with the Eva L. Gordon Award from the American Nature Study Society for outstanding achievement in nature literature in 1966. The awards did not stop here. In 1969, he was presented both the American Library Association's (ALA) notable book citation and the School Library Journal's best book citation for Lost Wild America: the Story of Our Extinct and Vanishing Wildlife. The National Science Teachers Association presented him the outstanding science books for children citation several times: 1972 for Scoop, Last of the Brown Pelicans, 1974 for Gypsy Moth: Its History in America, 1975 for Sea Star, 1977 for Peeper, First Voice of Spring, 1980 for Green Darner: The Story of a Dragonfly, 1981 for Vanishing Wildlife of Latin America, 1982 for Rajpur, Last of the Bengal Tigers, 1984 for Gorilla, 1987 for Whitetail, and 1988 for Lili: A Giant Panda of Sichuan. The Children's Science Book Award honorable mention was given to him by the New York Academy of Sciences in 1975 for Gypsy Moth: Its History in America. In 1977, Robert received the Golden Kite Award for Peeper, First Voice of Spring from the Society of Children's Book Writers. From them he also received the Golden Kite honor book for America's Endangered Birds: Programs and People Working to Save Them in 1979. The last award Robert McClungwon was the Spur Award second-place honor in 1990 from the Western Writers of America for Hugh Glass, Mountain Man.