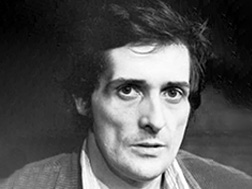 Writer ofThat Championship Season (1972) and Oscar-nominated actor of The Exorcist, Jason Miller died in Scranton in 2001.

Playwright and actor Jason Miller was born in New York in 1939. After earning his education in Scranton, Pennsylvania, and Washington, D.C., Miller went on to write a number of plays, including the highly-acclaimed That Championship Season (1972). He was also a professional actor, receiving an Academy Award nomination for his role in The Exorcist. He also acted and directed with the Scranton Public Theatre. Miller died in 2001 in Scranton, Pennsylvania.

Actor and playwright Jason Miller was born on April 22, 1939, in Long Island, New York. He was the son of John Miller, an electrician, and Mary Miller, a special education teacher. Very early in Miller's life, the family moved to Scranton, Pennsylvania, which became his "home town." Jonathan Hershey writes in the Dictionary of Literary Biography that Miller "specialized in athletics and delinquency" at St. Patrick's High School, before he was turned on to acting and public speaking by Sister Celine, one of his teachers. After that, Miller became more focused and studied theatre and playwriting at the University of Scranton, where he earned a BAin 1961. He then took classes at Catholic University in Washington, D.C., where he wrote his first play, The Winners, and met his first wife, Linda Gleason, in 1963. The couple had three children before their 1973 divorce. Miller later married Ruth Josem. He also had a child with actress Susan Bernard.

Following his year at Catholic University, Miller began a difficult, struggling period in his acting career. He and his wife moved to New York, where he got some Off-Off-Broadway roles and small parts in soap operas. He had more success in the regional theatre circuits. He held a number of odd jobs to support himself and his family financially. His playwriting took a similar path. In 1967, he had three of his one-act plays produced Off-Off-Broadway: Perfect Son, Circus Lady, Lou Gehrig Did Not Die of Cancer. He moved up a level, staging Nobody Hears a Broken Drum Off Broadway in 1970. While Broken Drum received poor reviews, Miller achieved greater success in 1972 and 1973.

The period from 1972 through 1973 brough Jason Miller to prominence as an actor and as a playwright. While doing dinner theatre in Fort Texas in 1970, Miller began writing what became his signature play: That Championship Season, which play is set at a reunion of a championship high school basketball team at the coach's house. They find, after prompting from the coach, that they are no longer the "team" they once were. By the end of the play, they reconcile and swear to act honorably in the future. The play received rave reviews and earned the Tony Award for Best Play and the Pulitzer Prize for Drama. Miller was also nominated for his role of Father Karras in The Exorcist. Miller continued writing teleplays and acting. He also spent a great deal of time in his hometown of Scranton, acting as Artistic Director of the Scranton Public Theatre for many years.