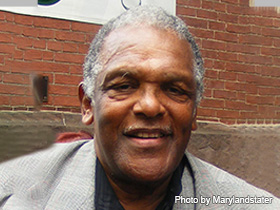 Hall of Fame running back Lenny Moore played for the Baltimore Colts from 1956 to 1967.

Lenny Moore was born November 25, 1933, in Reading, Pennsylvania. He attended The Pennsylvania State University where he was a member of the football team. He was drafted into the National Football League in 1956 and played for the Baltimore Colts for twelve years. His successes on the field led to his induction into the National Football Hall of Fame. Currently, Moore works for the state of Maryland helping underprivileged youth and is involved in charity work.

Lenny Moore was born November 25, 1933 in Reading, Pennsylvania. Early on in his childhood, it was apparent that Moore was blessed with exceptional athletic ability. He himself has stated that even at a young age he felt as if he belonged on the football field. In high school, during which time his speed earned him the nickname "The Reading Rocket," Moore made good on his athletic talent and earned a college scholarship. He would later be named to the Pennsylvania All-Century team.

Starting in 1952, Moore attended The Pennsylvania State University. He was the first individual in his family to attend college. As a Nittany Lion, Moore achieved great success on the college athletic field. He was rewarded for that success when he was drafted in the first round of the National Football League (NFL) in 1956. He was taken with the ninth overall pick by the Baltimore Colts.

In Moore's first full season of 1956 he won the NFL Rookie of the Year award. Two years later he helped lead his team to its first world Championship in 1958. They would follow that up with a repeat in 1959. All told, Moore played in three Championship games.

During his rookie season, Moore established himself as one of the most well rounded runners and receivers in the league. He went on to play both halfback and flanker for the Baltimore Colts for 12 seasons (from 1956 through 1967). Moore's most recognizable season came in 1964 when he was voted by his fellow players as the Most Valuable Player for his 20 total touchdown performance. This is even more remarkable considering that he played most of the season with complications from appendicitis, thus also gaining credibility as one of the toughest players to play the game. He also won the Comeback Player of the Year Award in 1964.

Moore also faced the difficult task of being an African-American in the NFL during the 1960s. Each team as he recalled averaged only six or seven African American players on their roster during that time. His race also came into question upon his retirement in 1968 when he was denied a long-term contract with CBS, ending his attempt to be the first black sports broadcaster for that firm.

Moore was ranked by The Sporting News as the 71st best player in the history of football. Also, his number "24" has been retired by the Baltimore Colts, never to be worn again in tribute to his success. Moore remains the only player to ever have 40 receiving and 40 rushing touchdowns in a career, ending his tenure with 113 total touchdowns. He also accumulated 12,451 total yards, made seven Pro Bowls, five all-NFL teams, and shares the record of most consecutive games (18) with a touchdown, a statistic he held individually for 40 years. Moore was also voted into the National Football Hall of Fame in 1975 and was named to the NFL's 1950s All Decade Team. In 2008, Moore was inducted into the East-West Shrine Game Hall of Fame. Later, in 2009, he was honorary captain for the Penn State game against Syracuse, and became the first former Penn State player to be invited to participate in the pre-game coin toss.

Moore has remained active to this day in the community. He currently is a program specialist for the Maryland State Department of Juvenile Justice. He spends his time as a keynote speaker to churches, organizations and youth groups teaching children and adults alike about the risks of drugs and works to improve the lives of troubled teens.

Most important to Moore is his charity work that raises money both for disadvantaged youth and for the fight against Scleroderma. This benefit dinner he holds in loving memory of one of his five children, Leslie, who died at the age of 43 of progressive systemic sclerosis. Moore's notoriety as a famous athlete, public speaker, and now fundraiser makes him a truly inspirational individual.