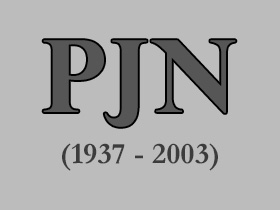 A professor at Lock Haven University, Nicholson published Odds Without End, a collection of short stories, through the Lock Haven Press in 1972.

Professor and writer Paul Joseph Nicholson was born in 1937 in Oklahoma. After earning degrees in creative writing and acquiring experience in advertising and publishing, he took a position at Lock Haven University, teaching there for over 30 years. He wrote numerous poems, short stories, and reviews in magazines. Nicholson died in 2003.

P. Joseph Nicholson was born on January 4, 1937, in Oklahoma City. He was the son of an investment broker, Paul, and Dorothy Nicholson. After completing his high school coursework, Nicholson matriculated at Texas Technological College (now Texas Tech University ), earning his B.A. there in 1960. In 1962, he earned his MA at Oklahoma State University. He also attended the University of Iowa from1962 to 1963 to earn his MA in Creative Writing, taking up an instructorship in English at Texas Christian University from 1963 to 1966. While at TCU, he met Martha Whitaker, whom he married on December 24, 1965; the couple had a daughter named Kelleigh Elizabeth. He left TCU to become creative director at the Fort Worth advertising firm of Jack T. Holmes & Associates. In 1969, he became an assistant professor of English and co-director of the creative writing program at Lock Haven University. He lived in the nearby towns of Flemington and Clintondale for the rest of his life.

During his career, Nicholson worked in a number of different writing fields. He published a number of poems and short stories, including the collection entitled Odds Without End (1972),as well as reviews and non-fiction in Harper's Weekly and Rolling Stone, among other venues. He had also been owner and publisher of Ice Man's Press in Texas during the 1960s. Nicholson also owned and edited the Chrysalis Review. While at Lock Haven, he was fiction editor of the Lock Haven Review. He had also written a radio series called "Sowbelly," which aired on a Lock Haven radio station from 1974 to 1976. He retired from teaching at Lock Haven University at the end of the Spring 2003 term.

P. Joseph Nicholson died on December 4, 2003, in Williamsport, Pennsylvania. The Lock Haven University Alumni Association paid tribute to Nicholson, saying "he will be fondly remembered for his satirical sense of humor, puns, and one-liners; his passion for literature and the arts; and his love for his family."