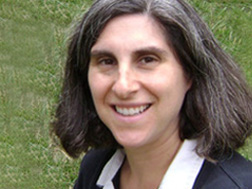 Writer of Myrtle of Willendorf, children's author Rebecca O'Connell grew up in Indiana.

Children's book author Rebecca O'Connell was born and raised in Poughkeepsie, New York. O'Connell received her Bachelor of Arts from Pennsylvania State University in 1990, and her Masters in Library Sciences from the University of Pittsburgh in 1992. In 2000, O'Connell's first young adult (YA) novel, Myrtle of Willendorf, was published and well received by critics. Her next book, The Baby Goes Beep, was published in 2003 and named a Charlotte Zolotow Honor Book in 2004.

Rebecca O'Connell was born Rebecca Ben-Zvi in Poughkeepsie, New York, on September 17, 1968, to Paul and Linda Ben-Zvi. Her family soon relocated to Indiana, Pennsylvania. Her father worked as an artist and professor of art and art history at Indiana University of Pennsylvania, and her mother was a teacher. From a young age, O'Connell was an avid reader and writer. Her favorite authors growing up were L. Frank Baum and Madeline L'Engle.

On June 16, 1991, she married John O'Connell, a social worker, and together they have one child, Edgar Gordon. She received a Bachelor's Degree from the Pennsylvania State University in 1990, and a Masters in Library Science (MLS) from the University of Pittsburgh in 1992. Upon earning her MLS, O'Connell became a librarian in the Children's Department of the Carnegie Library of Pittsburgh in 1992. Although she had always enjoyed writing, it wasn't until college that she began to write professionally. During her time at Pennsylvania State University, non-credit courses were offered on a variety of subjects. O'Connell took a course entitled "Women's Mysteries" that dealt with mythology and the history of women and religion. She says, "The course was mostly readings and discussion, but there were also meetings that featured candles, visualization, and pagan rituals." It was this course that became the inspiration for her first young adult (YA) novel, Myrtle of Willendorf (2000).

"My first book really stemmed from my experiences in State College," O'Connell told The Daily Collegian staff writer, Mollie Kehoe. "Everything I learned about spirituality and change were incorporated into it. I feel that young adults can gain knowledge from that. ... Penn State was very instrumental in me becoming an author. "... [I]t was the friendships and experiences I made that really made me change my ambitions and follow my dreams in life." She had originally set out to become a psychologist, but one day decided that being a librarian and writing books would "be a wonderful job."

In one of her other classes, O'Connell began writing a character sketch of Myrtle's friend Margie. After the class ended, she continued working on the story of Myrtle, a young girl dealing with issues of beauty and self-image. In the fall of 1998, Myrtle of Willendorf was accepted for publication by Front Street Books. Two years later, Myrtle was finally published in 2000, with Booklist saying, "A fine ear for language, sharp writing, and the ability to make readers see above, beyond, and through what's happening on the page are all attributes that show O'Connell's promise as a [young adult] author."

O'Connell eventually became the Senior Children's Librarian at Carnegie Library in Pittsburgh.Her book, The Baby Goes Beep, was published in 2003 and received the Charlotte Zolotow Honor Book Award. "I loved receiving those awards," she told Kehoe. "It's so exciting to know that people out there appreciate what I am doing." O'Connell's third children's book, Penina Levine Is a Hard-Boiled Egg was published in 2007 and recognized by the Jewish Libraries as a 2008 Notable Book for Older Readers. Three additional books have followed, including a Penina Levine prequel and her latest book, Baby Parade (2013), which O'Connell's colleague Amy describes as "a fun book for busy babies. ... Parents and caregivers can smile in recognition at the moments or touches that could only come from a baby's antics."

Rebecca O'Connell continues to live, write, and work in Pittsburgh, Pennsylvania, where she shares a home with her husband and son. She shared with Kehoe: "My main three pieces of advice [to readers and writers] are always the same. Read a lot; learn everything you possibility can; and never give up on following your dreams."