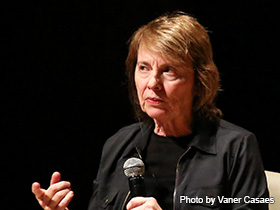 Camille Paglia earned her PhD from Yale University, where she began exploring human sexuality, quarreling with other feminists and professors, and analyzing feminism and sexuality within Western literature. Throughout the years, her unorthodox feminist views have stirred up much controversy among fellow scholars. She has taught at Bennington College and the University of the Arts in Philadelphia. Read more here.

Camille Anna Paglia was born on April 2, 1947, in Endicott, New York, to Italian immigrant parents, Pasquale and Lydia Anne Paglia. When Camille was in elementary school, her father relocated the family to Syracuse, New York, to accept a position as a professor of romantic languages at Le Moyne College. Although the Paglia family did not have a lot of money, the Paglias introduced Camille to Western art and culture when she was a young child. She was three-years-old when she first heard Georges Bizet's opera, Carmen; she claimed the opera struck her with "electrifying force." At the age of nine, Paglia tried to introduce her classmates to Shakespeare's Hamlet, but grew frustrated when they could not recite their lines. When Camille was twelve, the family acquired a television set, exposing her to 1930s movies, which she enjoyed. Growing up, Paglia grew fascinated with women such as Katherine Hepburn, Elizabeth Taylor, Amelia Earhardt, and Mary Woronov. For her sixteenth birthday, she received a copy of Simone de Beauvoir's The Second Sex. After reading the book, she was determined to be an influential feminist author. As a student at Nottingham High School, Camille was outspoken, challenging her classmates' opinions during discussions. She was an excellent student, but was very assertive, and at times, had a reputation as a rebel.

Upon graduating high school in 1964, she attended SUNY Binghamtom-Harpur College, where her reputation as a rebel and scholar followed her. She committed thirty-nine pranks one semester and was put on probation. Despite her insurgent tendencies, she graduated as valedictorian of her college class in 1968. She attended Yale Graduate School where she earned her Master's degree as well as her Doctoral degree in 1973. While at Yale, Paglia kept her outspoken attitude, and argued with fellow novelist and social activist Rita Mae Brown, among others. Paglia proclaimed herself as a lesbian while at Yale in 1968, after being insulted by Robert J. Lipton, a prominent Yale psychiatrist. While at Yale, Paglia became increasingly interested in sex roles in Western culture and feminism. She was fascinated by Kenneth Clark's book, The Nude, which she thought would prevent students from falling into "the worst excesses of feminist theory."

After graduating from Yale at the age of 27, Paglia began teaching at Bennington College in Vermont while writing Sexual Personae: The Androgyne in Literature and Art. This book, which garnered her much attention, examined her thoughts on "matriarchy, androgyny, homosexuality, and sadomasochism" (wikipedia). This work is considered her "magnum opus," and like her, it is provocative, assertive, and nonconforming. Seven publishers refused to publish Sexual Personae: The Androgyne in Literature and Art until Yale picked it up. Her first book proclaims Paglia as a self-proclaimed feminist with unorthodox views of feminism. She has said, "I consider myself 100 percent a feminist, at odds with the feminist establishment in America."

Sex, Art and American Culture: Essays (which includes material on Elizabeth Taylor, one of her childhood obsessions) (1992), Vamps and Tramps: New Essays (1994), The Birds (BFI Film Classics) (1998), and Break, Blow, Burn: Camille Paglia Reads Forty-three of the World's Best Poems (2005). As in her earlier years, she has remained outspoken. "The prostitute has come to symbolize for me the ultimate liberated woman, who lives on the edge and whose sexuality belongs to no one." The trend of her works is to examine feminism under roles of perversion and sadism in Western art. Over the years, these non-traditional definitions of feminist theology have offended many feminists and non-feminists alike.

For example, New York Times critic, Michiko Kakutani has the following to say about Paglia's essay, Vamps and Tramps. "Ms. Paglia's praise of prostitutes as avatars of sexual power ignores the fact that poverty and drug abuse drive many unhappy women to sell their bodies?" Traditional feminists abhor the idea of prostitution, of women being subservient sex slaves to men. It is in this paradox, Paglia's acceptance of and even reverence for prostitution that severely contradicts many views of feminism.

In the late 1970s, she left Bennington after assaulting a student who was flirting with her girlfriend at the time. After being unemployed for five years, in 1984 Paglia accepted a teaching position at the Philadelphia College of Performing Arts (now the University of The Arts in Philadelphia). As of 2005, she is an honorable University Professor of Humanities and Media Studies. She is also a contributing editor at the magazine, Interview, and continues to write as a columnist for Salon.com.