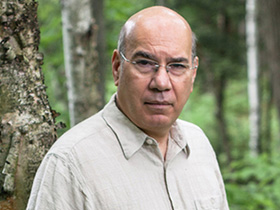 A poet, novelist, biographer, and teacher, Parini has also served on the board of directors of the National Book Critics Circle Award. At the time of this writing, he currently teaches at Middlebury College in Vermont.

Scholar and poet Jay Parini was born in Pittston in 1948. His writing runs the gamut from scholarly articles to poetry collections and everything in between. He is currently a professor at Middlebury College in Vermont.

Jay Parini was born in Pittston, Pennsylvania, on April 2, 1948, and raised in Scranton. His parents were Leo Joseph Parini, a Baptist minister, and Verna Ruth Parini. In 1981, he married Devon Stacey Jersild, a clinical psychologist and writer, with whom he had three sons.

Parini attended Lafayette College in Easton, Pennsylvania, and during his junior year studied abroad at the University of Saint Andrews, Scotland. He enjoyed Scotland so much that after earning his Applied Baccalaureate (AB) Degree from Lafayette in 1970, he immediately returned to the University of Saint Andrews where he received a PhDin 1975. It was there, in 1972, that Parini began writing poetry and published his first work, the poetry collection Singing in Time (1972), while he was still an undergraduate student.

In 1975, Parini returned to the United States to take a position as an Assistant Professor of English and Director of the Creative Writing at Dartmouth College. During this time, Parini founded and co-edited the New England Review in 1977 and married Devon Stacey Jersild in 1981, whom he had met at Dartmouth. He then moved to Vermont where he obtained his position as Axinn Professor of English and Creative Writing at Middlebury College in 1982.

Jay Parini has published numerous books, which have been translated into more than thirty languages, and has contributed work to many projects as an editor, nonfiction writer, and critic. His books of poetry include Anthracite Country (1982), Town Life (1988), House of Days (1998) and The Art of Subtraction: New and Selected Poems (2005). Many sources, including the New York Times Book Review and Chicago Tribune Book World bestowed critical acclaim on Anthracite Country, a book that investigates issues of class, labor, and religion within the coal region of Eastern Pennsylvania.

Parini's self-admitted obsession with Robert Frost, who had both attended Dartmouth and resided in Vermont, led him to write the biography Robert Frost: A Life, published in 2000. While critical debate was spurred over whether Frost's unflattering characteristics were underrepresented in Parini's work, the work was also praised for being well-researched and exceptionally written, earning it the Chicago Tribune-Heartland Award in its publication year. Other biographies by Parini include John Steinbeck: A Biography (1994) and One Matchless Time: A life of William Faulker (2004). He has also written nonfiction books on a variety of subjects, including The Art of Teaching (2005), an educational memoir that likens teaching to the theatre and other creative arts, Why Poetry Matters (2008) and Promised Land:Thirteen Books that Changed America (2008).

The title poem, "Anthracite Country," from his 1982 collection, was selected for publication by the Public Poetry Project of the Pennsylvania Center for the book in 2010.

He is also the author of eight novels, including Benjamin's Crossing (1996), The Apprentice Lover (2003), and The Passages of H.M.: A Novel of Herman Melville (2010), which explores the literary great Herman Melville through the perspective of his wife, Lizzie.

In 2009, Jay Parini's novel The Last Station (1990)—centered on the last tumultuous years of Leo Tolstoy's life—was created into an Academy Award-nominated film starring Helen Mirren, Christopher Plummer, and James McAvoy. In 2015, he publishedEmpire of Self: A Life of Gore Vidal.Parini would go on to co-author a screenplay based on the book. However, in 2017, having just finished filming, Netflix pulled the plug on the film after sexual misconduct allegations surfaced about Kevin Spacey— who was playing Gore Vidal.

At the time of this writing, Parini resides with his wife in Weybridge, Vermont, where he continues to serve as D. E. Axinn Professor of English and Creative Writing.