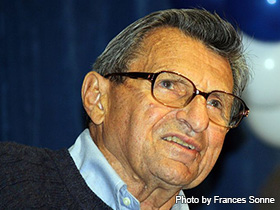 Born in 1926, Joe Paterno served as head football coach at Penn State University for 46 years. He was named a 2005 AP Coach of the Year and inducted into the College Football Hall of Fame in 2007. To the Penn State community, he was more than a football coach and involved with numerous local charities and fundraisers. After the arrest of his longtime assistant coach on child sexual abuse charges in 2011, however, Paterno was fired by Penn State trustees mid-season. A couple months later, he lost his battle with lung disease and passed away on January 22, 2012.

Joseph Vincent Paterno was born in the large city of Brooklyn, New York, on December 21, 1926 to Angelo and Florence Paterno. Paterno is no stranger to adversity. Being raised during the Depression, he was almost forced to leave his high school, Brooklyn Prep, due to the hefty tuition. Through hard work and perseverance, Paterno was able to graduate high school and attend Brown University. While at Brown, he played quarterback and cornerback on the football team. With 14 interceptions, Paterno shares the record for most interceptions in a career at Brown University. Despite not being a spectacular quarterback, he did not walk away from Brown empty-handed. It was here that he was able to develop and build upon his innate leadership skills, the skills that would propel him to become a successful college football coach.

After Brown, Joe Paterno became officially known as Coach Paterno, having accepted a position at Penn State University as an assistant football coach. Working underneath Hall of Fame head coach Rip Engle from 1950-1965, Paterno was able to get vital experience under his belt before becoming head coach in 1966. Shortly after taking the reins of Penn State's football team, Paterno's fame began to soar. Maybe it was the undefeated regular seasons in 1968, 1969, and 1973, maybe it was the first national championship in 1982, or maybe it was how he wore his famous thick glasses with hiked-up pants showing his white socks and tennis shoes. Whatever the reason, Paterno has having an enormous impact on college football. As a result of the success and fame, Paterno eventually acquired the legendary nickname of "Joe Pa."

Coach Paterno led by example. Former Athletic Director Ed Czekaj once said that "Joe works so damn hard to get things done that he inspires the rest of us." Combined with his work ethic, Paterno's ability to pay attention to meticulous details is another reason why he has obtained so much success. Joe Pa's philosophy is that, "If you take care of the little things, the big things will take care of themselves." With his tenacious and scrupulous work ethic, it becomes obvious why Paterno has been a model for future generations. Even rival Ohio State coach, Jim Tressel acknowledges Paterno's success when he was quoted saying, "It's incredible to think about the commitment he's had to Penn State, the growth he's fostered and nurtured... Paterno's legacy has made an impact on members of the younger generation as well."

However, Paterno's actions on the field are not the only attributes that have made him the ideal role model. Claiming to live a simple life, modesty is the key to Paterno's happiness; especially with money. George Paterno, Joe's brother, once said that "Joe doesn't think one should have a great quantity of money. And if you do, you should share it!" And sharing it is exactly what Paterno has done. Throughout his career, Paterno contributed his time to numerous charities and events. He has done so by either donating money himself and/or by aiding in the fundraising process. Most of Paterno's efforts have gone to making Penn State a better university. The most obvious contribution that Paterno has made to Penn State is the expansion of Pattee Library. The new section named "Paterno Library" is just one of the many examples that display Paterno's humanity and dedication to Penn State University.

A Big Ten Championship and two bowl game appearances in the last two years indicates that Joe Pa still has what it takes to be successful, despite his age. His career has been so successful that recently in 2005 he was named AP Coach of the Year and then in 2007 was inducted to the College Football Hall of Fame as a coach.

Paterno's life changed in November of 2011 for more reasons than one. After the arrest of Paterno's long-time assistant coach on child sexual abuse charges, Penn State trustees fired Paterno mid-season. The case is currently still under investigation. The same month, son Jay Paterno announced that Joe is battling a treatable form of lung disease. In the early hours of January 22, 2012, Joe Paterno passed away.

Though Paterno's reign at Penn State abruptly came to an end, his legacy will live on. Serving as head coach for Penn State's football team for 46 years, Paterno has impacted the community greatly. From his philanthropic mindset and vast contributions in fundraising, to his pride not only in football, but also Penn State as a whole, Joe Paterno was much more than a coach--he was an inspiration to those around him. As Joe Pa once said, "believe deep down in your heart that you're destined to do great things."