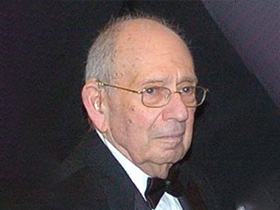 Painter Philip Pearlstein is famed for his dispassionate nudes.

Born in Pittsburgh, Pennsylvania, Philip Pearlstein is known for his ability to paint dispassionate, realistic nudes in a way that is reminiscent of landscapes. He earned a M.F.A. from New York University and served as a distinguished professor at Pratt for nearly 30 years. Pearlstein will be most remembered for his 60 private exhibitions and commissions at some of the most exclusive museums in the world.

Philip Pearlstein was born May 24, 1924, in Pittsburgh, Pennsylvania. In 1941, while attending high school, Pearlstein— a member of the art club— won a Scholastic Magazine National Art Contest and had his painting of a merry-go-round published in Time Magazine. While in high school, he took Saturday art classes at the Carnegie Institute. After high school, in 1942, he decided to enroll at Carnegie full time. In 1943, after a semester of study at Carnegie, Pearlstein was drafted into the army during World War II. In the army (1943-1946), Pearlstein was assigned to the Training Aids Unit at Camp Blanding, Florida, where he produced graphic arts, posters, prints, and screenings.

The beginning of Pearlstein's professional career ignited when he accepted a teaching position at the Pratt Institute in Brooklyn. At Pratt, Pearlstein joined an art group comprised of fellow professors and started his first experiments with lithography and expressionist landscapes. He painted landscapes in which every shape, shadow, and angle was expressed in scrupulous detail. It was in these group sessions, Ken Johnson from the New York Times explains, that Pearlstein learned the fundamentals of a figurative painter, "...creating works of startling realism, with an unsentimental emotional tone." Taking from his experience in landscapes, Pearlstein addressed aspects of realism and rethought how the nude body could be expressed. His painting sessions at Pratt, and further into his career, became long and arduous, utilizing female and male models for weeks. Benjamin Genocchio from the New York Times admits that Pearlstein "likes to arrange his models in unusual and unorthodox poses, sometimes even with parts of the body going off the edge of the canvas. He also surrounds them with dolls, models, junk objects and toys, resulting in unexpected and disturbing juxtapositions." In addition, models were placed into floodlit rooms and asked to stay in very still (but natural) positions that created tension and boredom. Genocchio compares his nudes to "...holograms or mannequins, almost real but never quite coming to life. They are usually sleeping, sitting or lying down, which makes them seem even more static and unreal." Pearlstein's intention was to elucidate the discomfort and pain in his model's body expressions, many times omitting the head.

At Pratt, Pearlstein was afforded the opportunity to showcase important one-man shows, including those by the Georgia Museum of Art, University of Georgia (1970-1971); Staatliche Museum Preussischer Kulturebesitz, Kupferstichkabinett, Berlin-Dahlem (1972), Madison Art Center, Wisconsin (1978), Springfield Art Museum, Missouri (1978-1979), Davison Art Center, Wesleyan University (1979), John and Mable Ringling Museum of Art, Sarasota (1981), American Academy, Rome (1983), Milwaukee Art Center (1983-1984), and Amherst College (1986). Pearlstein served as a distinguished professor until his retirement in 1988 for his ability to communicate on an interpersonal level with his students, and was offered an exhibit at the Brooklyn Museum of Art in 1989. Additionally, Pearlstein has received many awards including: the National Council of Arts Administrators Visual Artist Award; The Benjamin West Memorial Medal, the Artists Fellowship, Inc., and honorary doctorate degrees from Brooklyn College and New York Academy of Arts.

Currently, Pearlstein lives in New York City where he is the President of the American Academy of Arts and Letters. In early 2007, he exhibited his New Paintings at the Betty Cunningham Gallery in the Chelsea section of Manhattan and has one of his most famous paintings Two Female Models in the Studio at the Museum of Modern Art in New York City. In September of 2007, Pearlstein exhibited Philip Pearlstein: The Dispassionate Body at the Wachovia Gallery in Doylestown. Brian H. Peterson, the Senior Curator at the Michener Art Museum explains, "This challenging exhibition questions our typical ideas of beauty and meaning in art. Pearlstein is not concerned with the human figure as the bearer of symbolic and cultural narrative; he is interested in a more dispassionate, playful observation of the human form in complex visual interactions with other bodies, objects, etc. Pearlstein paints what he sees — no more, no less." In his mid eighties, Pearlstein is still challenging audience's perceptions of the human body, making one realize that nudity can be dispassionate.