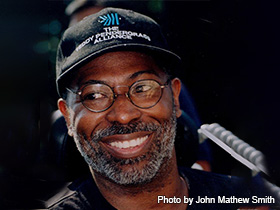 R&B singer Teddy Pendergrass may be best known for 1972's If You Don't Know Me By Now.

Born and raised in Philadelphia, Pennsylvania, Teddy Pendergrass was one of the most notable R&B stars of the 1970s. His began his career in 1969 as a drummer for Harold Melvin and the Blue Notes and eventually transitioned to a successful solo singing career. A tragic car crash on March 18, 1982 left him paralyzed, and he eventually passed away on January 13, 2010 due to respiratory failure.

Theodore DeReese Pendergrass was born on March 26, 1950 at Philadelphia's Thomas Jefferson Hospital. He was raised solely by his mother, Ida Pendergrass, because his father Jesse left the family prior and was then murdered when his son was only twelve years old. The young Pendergrass never knew what he was missing, however, because he and his mom had the support of a large extended family.

Ida raised Pendergrass, her only child, in a very religious household. The two of them made the Glad Tidings Tabernacle Church their second home. In his memoir Truly Blessed, Pendergrass recalls attending services "up to six days a week... and sometimes most of the day on Sundays." Glad Tidings was more than a place of worship, though; it was a refuge, isolated from the North Philadelphia ghetto in which it was located.

Pendergrass's religious upbringing introduced him to his first genre of musical influence: gospel. By the age of three, he was singing gospel selections in front of the congregation of Glad Tidings. When Pendergrass became old enough for school, his appreciation for music began to broaden. He performed songs like "Climb Ev'ry Mountain" as part of the Philadelphia City Boys' Choir and familiarized himself with R&B and rock & roll by watching American Bandstand. Pendergrass also discovered his passion and talent for the drums by fooling around on the bandstand at Sciolla's, a supper club that employed his mom. Drumming came naturally to him; he could sit down and play any rhythm that popped into his head, no matter how intricate or fast.

When Pendergrass was 13, he and his mother moved to what Pendergrass noted in Truly Blessed as "a fateful location...a few blocks from Philly's great R&B mecca: the Uptown Theater." Paralleling the legendary Apollo Theater of Harlem, the Uptown was one of several venues at the time that primarily showcased black entertainers. It was because of his proximity to the Uptown that Pendergrass was able to witness the acts of Motown stars like Little Stevie Wonder, Marvin Gaye, and the Temptations. When Pendergrass saw Jackie Wilson's performance send female patrons into a state of hysteria, he resolved to become a singer.

Over the course of the next few years, Pendergrass's adolescent life took a turn for the worse. Even though he had always excelled in school, he started skipping classes to drink cheap wine with his friends. Additionally, he spent 4 months at the Youth Study Center in Philadelphia, his conviction for a robbery that he never actually committed. After his sentence was over, Pendergrass worked hard to catch up on his studies, but when he failed the eleventh grade, he decided to drop out of high school to pursue his dream of becoming a musician.

During the first couple of years after high school, Pendergrass held a number of jobs, ranging from picking peaches to driving a sixteen-foot truck. One summer when he was waiting tables in Atlantic City, he got hired for his first professional music gig. He went on the road as the drummer for Little Royal, but this engagement was short-lived.

Pendergrass's big break finally happened in 1969 when he was discovered by a singer, Harold Melvin, who was looking for a few singers and a band to rebuild his recently disassembled lineup. Pendergrass began touring with Harold Melvin and the Blue Notes as their drummer, just like he had with Little Royal, but this job was a step above anything he had done before. The group played a continuous string of bookings and managed to straddle two different worlds that Pendergrass described in Truly Blessed as "the classier white supper clubs and hotel lounges and the small black clubs and bars frequented by pimps and players."

Within two years of touring with Harold and the Blue Notes, Pendergrass transitioned from drums to lead vocals. In theirEncyclopedia of Rock, Dave Hardy and Phil Laing described Pendergrass's singing on Blue Notes hits as "tough, powerful... mixing the styles of gospel and blues shouters." He combined an "earthy, sexual insistence on the more aggressively paced pieces with mellow, moodier vocal work on ballads."

In addition to his blossoming career, Pendergrass had a growing family in the early 1970s. He fathered three children — Tisha, LaDonna, and Teddy II — who were all born in 1974, but he never married the women who bore them. He was on the road a lot at this point and split his down time between the two mothers. Fed up, both women ended up leaving Pendergrass, taking the children with them.

Pendergrass was eventually able to be part of his children's lives, but music was always his main focus. In 1975, he and the Blue Notes split from Harold Melvin because of creative differences. Unfortunately, Philadelphia International Records (PIR), which had signed with the Blue Notes during their time with Harold, had no immediate plans to record the separated group, primarily due to legal issues. Because Pendergrass was itching to get back in the studio, he decided to leave the Blue Notes when PIR approached him about a solo contract.

Pendergrass's decision to go solo at this time was risky because black artists were being overshadowed by new, trendy disco music, but Pendergrass wasn't worried. He told Newsweek magazine, "You can get some feeling out of good music. The only thing you can get out of disco is smelly underarms." Despite the success of disco, Pendergrass succeeded as well—each one of his albums went either gold or platinum.

As a solo artist, Pendergrass found a way for his music to appeal to a broader audience, "reaching both those who [liked] sweetness and those who [preferred] swagger." As observed by a Stereo Review writer, he still "belted out his funky amorous entreaties with a raw virility that set many female libidos a-quiver," but he sometimes also "set aside his club and loincloth to sing tenderly." Because of his new found versatility, crowds flocked to hear Pendergrass sing, but more devoted than any were his female fans. Pendergrass began to hold "Ladies Only" concerts, and women would throw teddy bears and lingerie onstage to show their love for the man PIR's Kenny Gamble referred to as the "black Elvis."

Pendergrass lived his dream of being an R&B star for a decade, but on March 18, 1982, his life changed forever. While driving on a notoriously windy road in the Germantown section of Philadelphia, the brakes on his Rolls-Royce failed, and the resulting car crash broke Pendergrass's neck, leaving the star paralyzed from the waste down. This tragic misfortune made Pendergrass question suicide, but he eventually found the strength to move forward. "I ain't going to lie, this thing's a bitch," Pendergrass said in Contemporary Musicians of his paralysis. "You go through living hell, through all kinds of anxieties, and you suffer enormous apprehensions about everything...But ... you have an option. You can give it up and call it quits, or you can go on. I've decided to go on."

Pendergrass gradually got back into the swing of things, and in 1984 he released his first post-accident album, Love Language, which was received with great enthusiasm by fans and critics alike. Ron Wynn of the All-Music Guide observed that Pendergrass now "sang in a slower, somber yet appealing way quite different from the swaggering, openly sexual, macho posturing of the late 1970s."

In the years following his accident, Pendergrass was honored numerous times within the music community and also accomplished a number of notable achievements, including writing an autobiography and forming the Teddy Pendergrass Alliance, a nonprofit group that advocates for people with spinal cord injuries. He far exceeded any expectations set after the crash, but his health eventually caught up with him. Pendergrass passed away on January 13, 2010 from respiratory failure, a complication linked to a surgery he underwent for colon cancer. He is survived by his wife Joan, his children and four grandchildren, and a legacy that will live on.