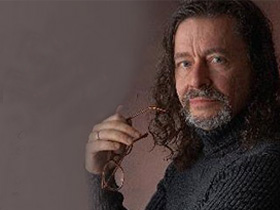 Playwright and screenwriter John Pielmeier, best known for his drama Agnes of God, was born in Altoona in 1949.

John Pielmeier was born in 1949, and earned his master's degree from The Pennsylvania State University (Penn State) in 1978. Since has written many award-winning plays and screenplays, including Agnes of God (1982), Madonna and Child (2007), a stage-adaptation of William Peter Blatty's The Exorcist (2017), and countless others. Many of his plays have also been made into movies. His work has garnered awards, such as the Humanitas Award, Christopher Award, Gemini Award, Romy Award. At the time of this writing, Pielmeier lives in Garrison, New York, and has guest lectured at Carnegie Mellon University, Penn State, the University of Vermont, and the Harriet Lake Festival of New Plays in Orlando, among other locales.

John Pielmeier was born in Altoona, Pennsylvania, on February 23, 1949, to Len and Louise Pielmeier. He was married in 1982 to Irene O'Brien, a fellow writer, on October 9.

Pielmeier earned a B.A. from Catholic American University in 1970. A Shubert Fellowship allowed him to study playwriting at the Pennsylvania State University, from where he earned an M.F.A in 1978. Following his graduation from Penn State, Pielmeier began working on his most famous play, Agnes of God. He also worked as an actor in regional theaters in Kentucky and Louisiana while he worked on his writing. In 1982, Agnes of God was performed on Broadway, following performances and revisions in Connecticut and Kentucky. The run on Broadway lasted more than a year, and made Pielmeier a recognizable name. The author adapted his play for the screen, and in 1985 it was made into a movie starring Jane Fonda, Anne Bancroft and Meg Tilly.

Agnes of God was followed by Courage, a play about Peter Pan-author J.M. Barrie, and a Vietnam War drama, The Boys of Winter, which appeared on Broadway in 1985. His most recent work to appear on the Broadway stage was Voices in the Dark, a thriller. He is also the author of several teleplays, including Sins of the Father, which first aired in 2001 and features actor Tom Sizemore, and Living With the Dead, featuring Ted Danson and Mary Steenburgen.

Pielmeier has won several awards for his work, including a prize from the Festival of New American Plays held by the Actors Theater of Louisville for Agnes of God, a National Endowment for the Arts grant in 1982, a Humanitas award in 1984 for Choices of the Heart, and a Christopher award for the same play, also in 1984.

The playwright lives with his wife in Garrison, New York.