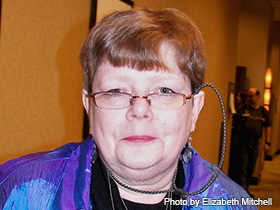 As one of the most talented and widely read authors of fantasy literature for young people, Pierce's novels have appeared on the American Library Association's and the New York Public Library's best books lists for young adult readers.

Fantasy fiction novelist Tamora Pierce was born in South Connellsville, Pennsylvania, and attended the University of Pennsylvania. Her fantasy novels largely focus on strong female characters and include Alanna: The First Adventure, The Song of the Lioness quartet, and Trickster's Queen, among others. Pierce's works have been recognized by best books lists of the American Library Association and New York Public Library for their contribution to young adult literature.

Tamora Pierce was born on December 13, 1954, in South Connellsville, a coal-mining town in western Pennsylvania. When Pierce was five, her parents moved her and her two younger siblings to Dunbar, Pennsylvania, where her uncle provided her with her first books— Winnie the Pooh and The Cat in the Hat—and fostered her love of reading.At age eight, Pierce's family moved to San Mateo, California, where her parents' marriage began to fall apart. Pierce dealt with the tension in her parents' marriage by telling herself stories. One day her father suggested that she start writing these stories down. Pierce, fascinated by Star Trek and The Lord of the Rings, began to focus on creating her own imaginary lands, unusual characters, and, what other fantasy novels failed to include—teenaged female warriors.

In 1969, Pierce's parents divorced, and she and her siblings moved with her mother back to Fayette County, in western Pennsylvania. The differences between California and Pennsylvania made Pierce feel out of place, and during the rest of her high school career at Uniontown Area Senior High School, Pierce focused less on her writing and more on helping others feel better about themselves. In 1972 she attended college at the University of Pennsylvania, studying psychology, sociology, education, and a variety of languages. During her junior year of college, Pierce rediscovered her interest in writing, and in her senior year she took a writing class. After graduating with a degree in liberal arts, Pierce spent some time in Idaho as a housemother in a group-home for teenaged girls. At that time, she was working on a novel for adults, but in telling the story to her girls, she adapted the content to appeal more to their teenaged interests.

In 1976, Pierce moved to New York to publish her writing and, after working a few non-literary jobs to pay the rent, began working for a literary agency. Her agent suggested Pierce rework her 732-page novel for adults into four separate books for teens. Having already told a teenage version of her book to her girls in Idaho, Pierce decided to take her agent's advice. She published Alanna: The First Adventure in 1983. Alanna: The First Adventure is the first book within The Song of the Lioness quartet, and it tells the story of a strong young woman training to become a page, a knight's servant, in the land of Tortall by pretending to be a boy.

After publishing her first quartet, Pierce went to work on others. Throughout the 1990s, Pierce wrote her second and third quartets, The Immortals and The Circle of Magic. She continued to write, and she began to make appearances in schools, encouraging students to write. In 2000, Pierce traveled to England for her first publisher-sponsored tour, to promote her most recent quartets, The Protector of the Small and The Circle Opens.

Critics agree that Pierce's books have made a great impact on young female readers, encouraging them to be strong and to overcome challenges like those faced by the characters she develops. Although courageous, Pierce's characters all have their own flaws, which, critics agree, allows readers to identify with them easily. After receiving such positive reactions to Alanna, Pierce decided to write about Alanna's daughter Alianne in two books, Trickster's Choice and Trickster's Queen. In 2004, the Young Adult Library Services Association, a division of the American Library Association, included Trickster's Choice on their annual list of Best Books for Young Readers.

Pierce, who continues to write, currently resides in Manhattan with her husband Tim Liebe, himself a writer and an actor. Pierce has several cats and birds and enjoys rescuing animals in need of help and a good home. Although Pierce has no children of her own, she loves spending time with her many nieces and nephews, as well as with her friends. She travels around the country, including Pennsylvania, visiting libraries and appearing at young writers' conferences.