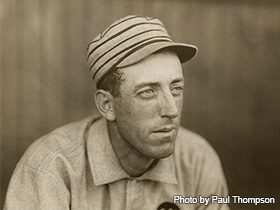 "Gettysburg Eddie" Plank was a star left-handed pitcher for the Philadelphia Athletics.

Born in 1875 in Gettysburg, Pennsyvlania, Eddie Plank attended Gettysburg College, which is where he started his baseball career. He signed with the Philadelphia Athletics, where he spent most of his career as a pitcher. Plank became one of the few left-handed pitchers to win 300 games in his career and had eight 20-win seasons. His Athletics teams won three World Series, and after spending two years in the Federal League, he retired in 1918. Eddie Plank died in 1926. Plank was inducted into the Hall of Fame in 1946 and remains one of the greatest left-handed pitchers to ever play.

Edward S. "Gettysburg Eddie" Plank was born August 31, 1875, in Gettysburg, Pennsylvania, in a small farmhouse to Mr. and Mrs. David Plank. Plank had three brothers, one of whom (Ira Plank) would play briefly in the major leagues with the Yankees. Eddie Plank attended Pennsylvania College, now called Gettysburg College, and had reportedly never played baseball before playing on the Pennsylvania College's team as a pitcher for two years. Then he was signed by the Philadelphia Athletics (also known as the "A's," now the Oakland Athletics). Plank was the first Gettysburg alumnus to become a professional baseball player.

"Gettysburg Eddie" played his first game for the As on May 13, 1901, at the age of 25, which was considered elderly for a rookie. Although his earned run average (ERA) was high for the dead ball era at 3.31, Plank still made an immediate impact, winning 17 games his first year. In his second year as a player, Plank established himself as one of the few great left-handed pitchers in the game, completing the first of his eight 20-win seasons. In his third season in 1903, Plank brought his ERA under three runs to 2.38. It never rose above 2.87 again for the rest of his career, leaving him with a career ERA of 2.35. Eddie Plank went to his first World Series in 1905 as his Philadelphia A's faced the New York Giants. It was the first of five trips to the World Series for Plank, and he faced his eventual Series rival, fellow future Hall of Famer Christy "Matty" Mathewson in his first ever Series game.

Unfortunately, Eddie had hard luck in the series all though his career. Though he had a superb World Series ERA of 1.32, Plank's career win-loss record in the World Series was a dismal two wins and five losses, and he was forced to sit out the 1910 Series entirely due to a sore pitching arm. Despite his losing record in the series, and despite losing the first two games he pitched opposite Mathewson, Plank's Athletics teams won the Series three times out of the five they visited with Plank. Eddie Plank won his last World Series duel with "Matty" in game five of the 1913 World Series 3-1 to win the Series for the A's. Plank played his last World Series in 1914, where the A's lost in four straight games to the Boston Braves (now the Atlanta Braves). After the 1914 series, the Athletics were all but dismantled by their management. Plank then went to the St. Louis Terriers of the upstart Federal League in 1915 and then the St. Louis Browns (now the Baltimore Orioles) of the American League in 1916, meaning that his statistics for these two teams are sometimes not counted as part of his major league career, although they are in the Baseball Hall of Fame. In 1918, he was traded to the Yankees, but chose instead to retire and open a car dealership in Gettysburg.

Plank's strength on the mound was his control. His curveball was called his best pitch, and he was described by his manager Connie Mack as having a sidearm style. In describing Plank's pitching, fellow Hall of Famer Eddie Collins said famously, "He (Eddie Plank) was not the fastest, not the trickiest, and not the possessor of the most stuff. He was just the greatest." Plank was described often as using stall tactics on the mound in order to make batters impatient, which often lengthened games. Ogden Nash immortalized this idiosyncrasy of Plank's in part of his poem, Lineup For Yesterday: P is for Plank, / The arm of the A's; / When he tangled with Matty / Games lasted for days." Plank ended his career as the first left-handed pitcher to win 300 games, and he still ranks third on the all-time wins list for left-handed pitchers with 326. Amazingly, almost a century later, Plank still leads all left-handers in shutouts and complete games pitched. Plank was elected to the Baseball Hall of Fame in 1946. Plank retired from his car dealership in 1923, but continued to live in Gettysburg until his death. Plank suffered a paralytic stroke on February 22, 1926, and died two days later on February 24, 1926. His funeral was held on February 28, 1926, and he was laid to rest in Evergreen Cemetery in Gettysburg, Pennsyvlania, leaving behind his widow, and his 10 year-old son Eddie Jr. In September 1926, the Philadelphia Phillies and Philadelphia Athletics staged an exhibition game titled "Eddie Plank Day." The event raised money to build a gym at Gettysburg College bearing Plank's name, which still stands today. A roadside historical marker was also erected in Gettysburg in 2000, paying tribute to the greatest baseball player ever to hail from Gettysburg.