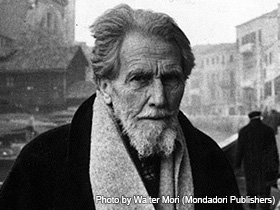 Ezra Pound was born in Hailey, Idaho, on October 30, 1885. His parents were Homer Loomis Pound, an assistant assayer at the Philadelphia mint, and Isabel (Weston) Pound. In 1914, Pound married Dorothy Shakespear, with whom he had a son. He lived with violinist Olga Rudge from 1922 to 1934.

Ezra Pound attended the University of Pennsylvania from 1901 to 1903. He spent the next three years studying Anglo-Saxon and Romance languages at Hamilton College, where he graduated with a PhD. He returned to the University of Pennsylvania (where he met Hilda Doolittle and William Carlos Williams) completed his fellowship in Romantics, and received his MAin 1906. After a short career as a teacher, Pound traveled Europe as a journalist, eventually settling in London, where he, along with Richard Aldington and others, founded the Imagist movement. He edited its first anthology, Des Imagistes, in 1914. Imagism was a response to the sentimental poetry of the nineteenth century where the poet jettisons the rhyme and meter of older forms of poetry in favor of hard, clear, concentrated images packed with meaning. Along with Wyndham Lewis and the sculptor Henri Gaudier Brzeska, he later produced Vorticism (an extension of imagism in which the artist no longer imitates nature at all and works for a vortex of energy and form), which replaced Imagism, and they also published a magazine, Blast. Pound's deep love for the arts and language lead him to Italy in 1933, where he met Mussolini and aligned himself with the Fascist party. In 1945, Pound was arrested by U.S. forces for having made treasonous radio broadcasts in Mussolini's service and was pronounced insane at his trial. He spent the next twelve years at St. Elizabeth's Hospital in Washington, D.C. Robert Frost led a successful effort to have the poet freed, and once released, Pound returned to Italy to live out his final years.

In an introduction to the Literary Essays of Ezra Pound, T.S. Eliot declared that Pound "is more responsible for the twentieth-century revolution in poetry than is any other individual." His first book of poems, A Lume Spento, appeared in 1908. Some of his most cited works included Hugh Selwyn Mauberley (1920), Homage to Sextus Propertius (1934), and his Cantos (1969), which he worked on throughout his life. His most notable literary works include, ABC of Reading(1934) and The Chinese Written Character as a Medium for Poetry (1920). Pound is responsible for translating Chinese texts by Confucius and others. He is credited with helping Wyndham Lewis, T.S. Eliot, and James Joyce publish their work in the magazines Egoist and Poetry, as well as playing a crucial role in the editing of Eliot's "The Waste Land" (1922).

Pound received several awards, but he was never truly recognized as a key literary figure until after his death. He considered himself an elitist, and much of his work was too difficult for most people to grasp in his time and also today. Pound received the Dial Award for distinguished service to American letters. While imprisoned after the war, Pound completed The Pisan Cantos (1948), for which he received the Bollingen Library of Congress Award in 1949. In 1963, he received a fellowship from the Academy of American Poets.

Ezra Pound died in Venice, Italy, on November 1, 1972. The scholarly examination of his work continues today since much of the Pound literary collection has yet to be explored.