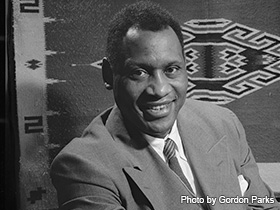 Famed actor, singer, and social activist Paul Robeson lived much of his life in Philadelphia.

Born in Princeton, New Jersey, on April 9, 1898, Paul Robeson was an actor and singer most famous for his breakthrough, race-defying performances in the United States and overseas. While traveling and performing, Paul Robeson seized many opportunities to speak out against racism and to promote world peace. His most memorable performances were in Shakespeare's Othello and Kern and Hammerstein's Showboat, where his influence as an African-American actor made statements against discrimination. Robeson passed away in Philadelphia, Pennsylvania, on January 23, 1976.

Paul Robeson was born the youngest of five children in Princeton, New Jersey, on April 9, 1898. His father, Reverend William Robeson, was an escaped slave who went on to graduate from Lincoln University in Pennsylvania, with training in public speaking and voice and a degree in theology. His mother, Maria Bustill, was a Quaker from Philadelphia whose family had been political activists and abolitionists.

At age nine, Robeson's family moved to Westfield, New Jersey, a town that discouraged blacks from even attending high school. Despite this obstacle, Paul and three of his siblings graduated from Sommerville High School. In high school, Paul Robeson stood out academically as well as socially. He joined the glee club and the oratory club, served as sports editor for the school's monthly newspaper, the Valkyrie, and played halfback on the football team.

After graduating in 1915, Robeson attended Rutgers University in New Jersey. He paid his way through this prestigious, and predominantly white, institution with scholarships, work, and the assistance of special benefactors, and he continued to excel in every arena. He played a number of spring and fall sports, such as baseball and track, which earned him 15 varsity letters.

Football, however, was the sport that Robeson was most recognized for. He was named All- American twice and was chronicled in the New York Age, the Chicago Defender, and the Philadelphia Tribune. Robeson also became a member of the oldest black fraternity, Alpha Phi Alpha, and continued to excel academically on the Rutgers debate team and in the Philoclean Literary Society. In 1918, he suspended some of his extracurricular activities to join the Student Army Training Corps where he, unlike most blacks, was not required to undergo officer training at a segregated center. He was allowed to train on campus with the other white Rutgers cadets.

In 1919, Robeson graduated from Rutgers University at the top of his class with the Phi Beta Kappa award. He also received the Ann Van Nest Bussing Prize and the Monsignor O'Grady Prize for oratory and impromptu speaking. He went on to attend Columbia Law School, where he met his wife, Eslonda Cordoza Goode, in 1921. In this same year, he performed in one of his first plays, Simon the Cyrenian, and in 1922, he joined the cast of the black musical Shuffle Along. He received his law degree in 1923 and shortly after had a son, Paul Robeson, Jr. He worked briefly at a small law firm but decided to leave law after experiencing discrimination in the work place. This event, however unfortunate, freed him to pursue his career as a performing artist. Paul

Robeson began his acting career as a member of the Provincetown Players. With this group he played the lead in two Eugene O'Neill dramas, The Emperor Jones and All God's Chillun Got Wings, in 1924. His stage career quickly blossomed into a film career, and in 1925, he was cast in Body and Soul. Next he was scheduled to perform in a Broadway production of Showboat, but dropped out due to production delays. Instead, he traveled to London to star in the musical in which he became very popular with his rendition of "Ol' Man River." Instead of singing the actual lyrics, "I'm tired of livin' and feared of dyin'," Robeson sang a more inspirational version, "I must keep fightin' until I'm dyin,'" which changed the nature of the song forever. This song, popularized by his later performances on Broadway and in film, became an inspiration for many African Americans.

In London in 1930, Robeson played one of his best-known roles, the title role in Shakespeare's Othello, for which he received the Donaldson Award for Outstanding Lead Performance. In that same year, he made his second film appearance in Borderline, which was shot in Switzerland. Robeson and his family then remained in Europe to escape the racism and discrimination he faced living in America. In 1934, he returned to New York to star in the film version of The Emperor Jones and in the play Sanders of the River. He concluded his film career with King Solomon's Mines in 1937, and his final role, Tales of Manhattan in 1947.

Since 1934, Robeson had frequently visited the Soviet Union. These trips had further influenced him to become more vocal about the treatment of blacks in America. Furthermore, because he had always been treated respectfully and been received enthusiastically during his many visits to the Soviet Union, Robeson became an advocate of communism and sacrificed his career by speaking out against the discrimination and the injustices faced by blacks in America, even petitioning the president to support the passage of an anti-lynching law. In 1942, he narrated a documentary about civil rights abuses, Native Land, and wrote a column for an activist magazine that was geared towards abolishing racial discrimination, People's Voice. However, due to his open acceptance of communism, he was called to testify before the House Committee on Un-American Activities in 1946, and in 1950, his passport was revoked, stripping him of his ability to travel and to spread his message of equality. In 1958, he published his autobiography, Here I Stand. In that same year, his passport was restored, and he made his last European tour in 1960, but due to failing health, he retired soon after.

Paul Robeson's last years were very different than what would be expected by the remarkable life he led. He retired to Philadelphia to live with his sister and fell into a deep depression. There he made two suicide attempts and suffered a series of mental breakdowns that led him to remain secluded for the final 10 years of his life. He died from complications of a stroke in Philadelphia on January 23, 1976, at the age of 77. Over 5,000 people attended his funeral, which was accompanied by his most famous recording, "Ol' Man River." Three years after his death, Robeson was the subject of the documentary, Paul Robeson: Portrait of an Artist, and in 1998 he posthumously received the Recording Academy's Lifetime Achievement Award. His fame and his influence have grown in the many years since; countless colleges, including The Pennsylvania State University, have buildings named in his honor. Paul Robeson's life continues to inspire and encourage all people as his work is passed through the generations.