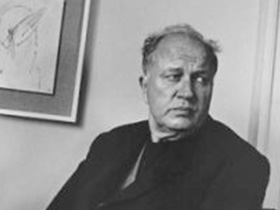 After evaluating his life and finding himself unhappy, Roethke decided to pursue a career as a poet. His hard work would make him a leading American poet.

On May 25, 1908, Theodore Roethke was born in Saginaw, Michigan, to Otto Roethke and Helen Huebner Roethke. Roethke was thin and sickly as a child who experienced quite a happy home life. As a young boy, he enjoyed assisting his father in their greenhouses and roaming a local game reserve which his family maintained. In The Glass House: the Life of Theodore Roethke, Allan Seager mentions a 1953 BBC interview in which Roethke expressed, "I had several worlds to live in, which I felt were mine. One favorite place was a game sanctuary where herons always nested." Such experiences as a child shaped Roethke's affinity for nature, which significantly impacted his poetry later in life.

Roethke attended Arthur Hill High School where he excelled scholastically. At the age of 13 Roethke prepared a quite notable speech on the Junior Red Cross. The speech was so excellent that it was eventually published in 26 languages. To enhance his social status, Roethke joined Beta Phi Sigma, an illegal fraternity where he spent time drinking bootleg alcohol during the prohibition. Although all was well at school, Roethke's home life began to turn sour. His father and his Uncle Charles had a falling out which led to the sale of the family greenhouses. When Roethke was 14 years old, his father was diagnosed with cancer. Also during this time, Charles Roethke had committed suicide. Shortly after, the cancer had taken the life of Roethke's father. The death of Roethke's father pushed Roethke to assume the responsibilities of the household leader. These events negatively effected Roethke as he became more quiet and began to develop a tense relationship with his mother.

The Great Depression compelled Roethke to leave Harvard and begin a teaching career. He first taught English and coached tennis at Lafayette College in Easton, Pennsylvania from 1931 until 1935. Here he became friends with fellow poet Stanley Kunitz. In 1935, Roethke left Lafayette to teach at Michigan State College (now University) at Lansing. That year on November 11, Roethke suffered a mental breakdown for which he had to be hospitalized. He remained hospitalized at Mercywood Sanitarium for two months before he was first released from the hospital and then released from his teaching position at Michigan State. After completing his Master of the Arts degree, Roethke became an assistant professor of English Composition at Penn State as well as the teacher of a poetry course and a few sections of freshman composition. Aside from being a professor at the Pennsylvania State University, Roethke was the coach of the Penn State Blue and White tennis team for five seasons.

At the age of 33, Roethke published his first book, Open House, and was also published in several journals such as: Poetry, New Republic, Saturday Review,and Sewanee Review. Open House, published in 1941, took Roethke ten years to complete. It received many great acclaims for its major American voice, including one from Robert Frost, who believed that Roethke received the best review possible, especially for a first publication. These poems were Roethke's first attempts at expressing his mental breakdowns and the sadness regarding the passing of his father. In April of 1942, Roethke was selected to read some of his poetry at Harvard in Cambridge Massachusetts for part of their annual Morris Gray Series. At the time, he was the youngest poet to be selected. One month later, Roethke was chosen to be one of three judges for the American College Quill Club's National Poetry Contest.

In 1943, Theodore Roethke departed from Penn State to teach at Bennington College where he could work on his next volume. Two faculty members from Bennington wrote such impressive recommendations that Roethke transferred jobs to become an associate professor of English at the University of Washington. His goal was to change his students' perspectives on poetry and to push them to develop innovative ideas. His second edition of poetry, The Lost Son and Other Poems, was published in 1948, and his third work, Praise to the End,was published n 1951.

In the early 1950s, Roethke received a plethora of honors, including The Guggenheim Fellowship Award in 1950 and Poetry Magazine's Levinson Prize in 1951. He was also rewarded grants from the Ford Foundation and the National Institute of Arts and Letters in 1952. After becoming reacquainted with Beatrice O'Connell, one of Roethke's former Bennington students, he married her in January 1953. The couple stayed in a villa off Italy's coast where he completed The Waking: Poems 1933-1953, a work that advertised his return to a more formalist verse. In the spring of 1954, Roethke was awarded $500 along with a Pulitzer Prize in Poetry for The Waking. "The Waking"assimilates themes of the spiritual and metaphysical, embracing the nobility of clairvoyance and accentuating the importance of faith above reason.


During the next two years he traveled across Europe with funds received from a Fulbright grant.
Words for the Wind was published in 1957, which won several prizes, including the Bollingen Prize in 1959, the National Book Award in 1959, the Longview Foundation Award, the Edna St. Vincent Millay Prize, and the Pacific Northwest Writer's Award. His poems included works of many different genres such as love poems, children's verse, and poems on natural themes. His poetic style attaches a love of land with a vision of an individual's evolution. His moods can range from witty to emotional, and his techniques switch from direct meters to free verse. According to renowned poet and author Rosemary Sullivan, Roethke's poetry conveys "his sensitivity to the subliminal, irrational world of nature; his relationship to his dead father, who occupies the center of his work...; his attempts to explore other modes of consciousness which carried him to the edge of psychic disaster...; his interest in mysticism...; his debts, so well repaid, to the poetic ancestors from whom he learned his craft; and the calm joyousness which rests at the core of his work." He can use crafty techniques to pull the subconscious out of the individual. In the Atlantic, James Dickey claims, "There is no poetry anywhere that is so valuably conscious of the human body as Roethke's; no poetry that can place the body in an environment." Roethke's style and techniques have fastened for himself a solid reputation as one of the most distinguished poets of the twentieth century. Critics most usually disagree in efforts to classify Roethke's poetic style. The intricate personal imagery along with his manner of utilizing nature to explore the human psyche have caused scholars to identify Roethke's verse with either the Romantic or Confessional types of poetry.

Roethke was able to balance his teaching and writing careers with reading tours in Europe and New York. On August 1, 1963, during a visit to the Virginia Bloedel estate on Bainbridge Island in Washington, he suffered a fatal coronary occlusion and died in the pool. The pool was later filled with soil and became a Zen rock garden as a memorial to Roethke. Later, 61 new poems were found and published posthumously in The Far Field, published in 1964 and in The Collected Poems, published in 1966. Due to his great influence on twentieth century poetry, Roethke is still very popular and widely read.