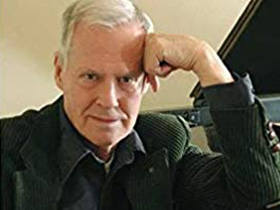 Composer Ned Rorem is best known for his art songs.

Ned Rorem was born in Richmond, Indiana on October 23, 1923. He studied music throughout high school and in college, attending Julliard. He spent a great deal of time in Paris, but the majority of his life was spent in New York. He is a highly accomplished composer and has received many awards, including a Pulitzer Prize. He is also a highly acclaimed diarist and has published many diaries, some of which chronicle his experiences living in Paris and New York, or dealing with a lover's struggle with AIDS.

Ned Rorem was born in Richmond, Indiana on October 23, 1923. His parents, Gladys Miller Rorem and Clarence Rufus Rorem, were Quaker pacifists. According to Edmund White in his book Arts and Letters, Rorem's parents were also indulgent and progressive. Gladys Rorem was a dedicated pacifist while Clarence Rorem helped found Blue Cross. Rorem has stated himself that he was lucky to have an exceptional family.

Rorem and his family moved to Chicago when he was young, and it was there that he received his first musical instruction. Rorem studied piano and composition under Leo Sowerby, who introduced him to various famous composers, including Maurice Ravel and Claude Debussy. The French influence of these composers is later seen in many of Rorem's compositions and his overall style of part writing.

Rorem graduated from high school at the age of 16. He then attended the American Conservatory and later Northwestern University from 1940 to 1942. At Northwestern, he mainly concerned himself with studying piano works, and this repertoire helped build his composing skills. He continued with his music studies at very prestigious conservatories such as the Curtis Institute, which he left in 1943, and the Julliard School of Music in 1947 and 1949. Rorem earned a scholarship to Curtis, where he spent one year before moving to New York. At Julliard, he earned his bachelors and masters degrees.

In his twenties, Rorem went on what was intended to be a three-month-long trip to Paris, but his vacation ended up lasting over ten years. While in Paris, he stayed with Marie-Laure de Noailles who was known for her bold personality and connections to famous artists. During the time he spent with her, Rorem led a life of glamour and boozing. As White mentions in Arts and Letters, Rorem was "introduced to Picasso; courted by handsome Frenchmen; bedded by sexy Arabs; advised by Virgil Thomson, Francis Poulenc and Nadia Boulanger; photographed by Carl Van Vechten, Man Ray and Henri Cartier-Bresson." Knowledge of Rorem's good looks was widespread, and in his diaries, he bragged about sleeping with prominent figures such as Leonard Bernstein and Tennessee Williams.

During the years he spent abroad, Rorem stayed in Morocco for two of them. At this time, he began using many different languages as the texts which he would use to compose his music. Rorem believes that the influence of his rich and culture-filled travel excursions has affected his creativity, and this influence is highly notable in both his compositions and his diaries.

Rorem returned to the United States in 1957, and he spent a long period of time in New York City. For these middle years of his life, he held teaching positions at various Universities, including the University at Buffalo, University of Utah, and eventually the Curtis Institute in Philadelphia. While he held many teaching positions, Rorem was mainly a composer.

Ned Rorem is particularly unique because he has thrived in two very different areas; composing and writing. Although Rorem's written works have received a great deal of attention, Rorem's main pursuit has always been music. Rorem himself has said "I was a musician who happened to write, not an author who happened to compose." Rorem's music tends to be tonally grounded and centered, a much more conservative approach than the method used by many other prominent composers of this time. Directly after his time in Paris, many colleges rejected Rorem, mainly due to the obsession with serialism during the time. Serialism, a method of composition in which a fixed permutation, or series, of elements is referential," was very popular in the early 1920s when Arnold Sch??nberg introduced the technique. However, despite this refusal, Rorem is an incredibly successful composer, and according to the New York Times, "He is considered by some to be the leading American composer of art songs." In fact, he has written over 500 art songs, including 17 song cycles. One of his most popular works is the production of Our Town, and one of Rorem's greatest accomplishments has been winning a Pulitzer Prize in 1976 for his composition Air Music, an orchestral suite commissioned for the American bicentennial." He also received a Grammy Award for Outstanding Orchestral Recording in 1989 for The Atlanta Symphony's recording of Eagles and Sunday Morning.

For most of his life, Rorem lived with his partner James Holmes, a choir director and organist. In Rorem's diaries, James Holmes was known as JH, and on many occasions Rorem mentioned how great his dependency on JH was. At the time when Rorem and Holmes were celebrating their 30th year anniversary, Holmes was battling cancer. Eventually, Holmes was diagnosed HIV positive, and after a great struggle with Rorem by his side, Holmes died of AIDS in 1999. Rorem described the struggle that he and JH faced in his publication, Lies. This haunting work shows the despair and brutality of watching a lover die. As Edmund White says in a roundtable for the New York Times,

The most terrible thing about AIDS is that it destroys the relationship, no matter how loving, between the two partners and eats away at the character of the person who's dying. Nobody has AIDS and is noble. That's why all these melodramatic, kitschy plays about AIDS are such lies. Ned told the truth. Maybe the diary is the best form for talking about AIDS, because it shows the quotidian pain, the shifts, the struggles, the reconciliations, the hopes, the dashed hopes. Everything is there.

Since the death of JH, Rorem has said that he no longer looks forward to anything. However, while JH's death was such a tragedy in his life, Rorem has played a larger role in AIDS awareness because of it.

Additionally, one of Rorem's goals throughout his life has been to write a concert length song cycle, which he finally was able to complete when he was in his seventies. This is one of Rorem's most notable works, entitled Evidence of Things Not Seen. This work was inspired by his struggle with AIDS and the many friends that he has lost to the disease. Johanna Keller, a professor of journalism at Syracuse University, said of the piece, "Ned seemed to reveal a more profound seriousness beneath the glittering surface of his charm, his wit." Rorem's personal tragedy inspired this work, along with Lies.

Moreover, in addition to the great influence Rorem has on the artistic field as a composer and a writer, Rorem is also a prominent and respected member of the Gay, Lesbian, Bisexual, Transgender community. When his first diary was published, it was only 1966. The climate was fairly conservative, and living a homosexual lifestyle was taboo. Rorem's diary was shocking to many, mainly because of its cavalier descriptions of a lifestyle involving gay hookups, booze, and excessive wealth. Rorem has also been quoted many times on his opinions surrounding which people in what positions or occupations are gay. For example, Rorem has stated that "all choir directors [are gay], without exception...No brass players, fewer tenors than you might think, 50% of baritones." He has even shared his views on homosexuality with the prominent sex researcher Alfred Kinsey.

Lastly, even though Rorem is clearly a very successful man, his view of the present time remains somewhat bitter. In an interview for The New York Times with Anthony Tommasini, Rorem stated, "I don't want to sound like a crybaby, but this is a bad time for music. Everybody knows it." Rorem has also expressed exasperation due to the fact that the majority of successful composers today will make in their entire careers what Pavarotti makes in one evening. Furthermore, Rorem was mortified and embarrassed by Paul McCartney bragging that he did not know how to read music. Despite his dissatisfaction with some contemporary music, he maintains an idealistic view of what music ought to be: "I conceive all music...vocally. Whatever my music is written for — tuba, tambourine, tubular bells — it is always the singer within me crying to get out."