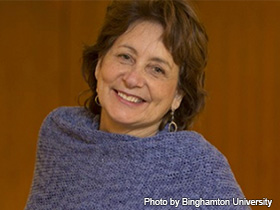 Novelist and poet Liz Rosenberg won the Pennsylvania Center for the Book's 2001 Lee Bennett Hopkins Award for Children's Poetry and was also a poet featured in the Center's 2002 Public Poetry Project.

Liz Rosenberg is best known for her work as a children's book author and her accomplishments in poetry. Her poetry collections have won many prizes, including the Claudia Lewis Poetry Prize and the Patterson Prize, and her long list of children's books and young adult novels have earned great commercial success. Equally committed to teaching as to writing, Rosenberg has taught all over the world and at colleges throughout the US. In 1984, she received the Chancellor's Award for Excellence in Teaching and, at the time of this writing, teaches as a full Professor of English at the State University of New York at Binghamton (SUNY - Binghamton).

Liz Rosenberg was born on February 3, 1958, in Glen Cove, New York, to Ross and Lucille Rosenberg. Both of her parents were avid readers and exposed Rosenberg to a literary lifestyle that had her reading by the age of two. As she grew older and went off to school, literature and writing continued to influence her life. She first attended Bennington College in Vermont before heading to Johns Hopkins University in Baltimore where she pursued her Master's degree. She then went on to attend the State University of New York at Binghamton where she earned her Doctorate in Comparative Literature.

While an undergraduate at Bennington, Rosenberg had the opportunity to study under John Gardner, who was already a noted novelist and an influential figure in the world of literature, counting writers such as Raymond Carver among his friends. He had published several novels, including the widely popular Grendel (1971), which won a National Book Award.

A romance ensued between Rosenberg and Gardner and the two were married in 1980. During the late 1970s and early 80s, they lived first in Lanesboro, Pennsylvania, and then in Susquehanna. Some of northeastern Pennsylvania's influence can be seen in Rosenberg's early poems, i.e. Susquehanna Nights, which comments on the nature she could observe while living in a farm house on thirty acres of countryside.

Two years after their marriage, however, Rosenberg and Gardner agreed to divorce, remaining close despite their separation. Six days after their divorce was finalized, in 1982, Gardner was killed in a motorcycle accident. The following year, Rosenberg married David Bosnick, a fellow writer and teacher, who she had first met at summer camp when she was seven years old. The two became friends in high school, each married other people, and then ten years after they had reconnected in high school, married. They have an actor son, Eli, and a daughter, Lily.

The Angel Poems, published in 1984, introduced Rosenberg as a talented new voice of American poetry and she went on to publish multiple collections. She was awarded the Lee Bennett Hopkins Award for Children's Poetry in 2001.

In addition, she has won the Claudia Lewis Poetry Prize, Patterson Prize, the Agnes Starrett Poetry Prize, and has received Books of Distinction awards for Hungry Mind Review and for Roots and Flowers: An Anthology of Poems About Family. She has served as a judge for the Lee Bennett Hopkins Award and the Lenore Marshall Poetry Prize, and has been a frequent contributor to the American Poetry Review.

Her poem "The Lighthouse," from Light-Gathering Poems, was selected for publication by the Public Poetry Project of the Pennsylvania Center for the Book in 2002.

Though her writing debut came in the form of poetry, Rosenberg is perhaps best known as a children's author. She says she writes for children because she feels a strong connection to childhood herself and is still a self-proclaimed child. She has said, I write for my children whether I am conscious of it or not. It stems from the love I feel for them, and my own ongoing connection to childhood, to children, and to childishness.

Rosenberg has won a Children's Choice Award for her work. Her book The Carousel (1995) was featured on the popular PBS children's show Reading Rainbow. Her first children's book, Adelaide and the Night Train (1989), describes the perspective of a little girl being put to bed as the train she is on takes off through the night, and the book's success spurred others.

Heart and Soul (1996) marked her debut in the young adult novel genre. In 2002, she followed with 17: A Novel in Prose Poems, in which she combined her skills as a young adult author with her poetic skills. The novel tells the story of a slightly neurotic seventeen year-old girl going through social and personal problems common in adolescence. In 2018, she penned the biography House of Dreams: The Life of L. M. Montgomery, illustrated by Julie Morsted - inspired by Rosenberg's childhood interest in biographies of famous women, she tells Michaela Wipond in an article for the L. M. Montgomer Institute at the University of Prince Edward Island.

In all, Rosenberg has written more than 20 award-winning children's books and edited multiple prize-winning poetry anthologies (including The Invisible Ladder and Light Gathering Poems). Her picture book, Tyrannosaurus Dad (2011), illustrated by Matthew Myers, was a Children's Book of the Month Club bestseller and has garnered praise from Publisher's Weekly, Kirkus, and School Library Journal, among others, and was an Amazon Top 10 Children's Book.

In 2009, she published her first adult novel, Home Repair. Home Repair was a Target Breakout book and voted top ten for Book Clubs and Most Likely to be Next Oprah Pick on Goodreads. Her adult novels that followed, including The Laws of Gravity (2013), also generated excitement.

Equally committed to teaching as to writing, Rosenberg has taught at Colgate University, Bennington College, Hollins College, and has guest taught all over the world, from Russia to Austria to Singapore, and at colleges throughout the United States. She has received the Chancellor's Award for Excellence in Teaching (1984) and, at the time of this writing, teaches as a full Professor of English at the State University of New York at Binghamton (SUNY — Binghamton).