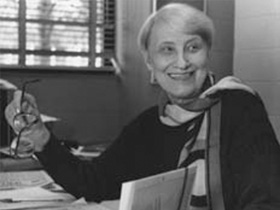 Drama scholar Susan Rusinko was born in Columbia County in 1922. After education at Wheaton College and Penn State, she eventually settled at Bloomsburg University in 1959 and remained there for over 30 years. Rusinko died in 1997.

Susan Rusinko was born on October 22, 1922, in Berwick, Pennsylvania. She is the daughter of John and Mary Rusinko. After graduation from high school, Rusinko earned her Bachelors degree (with honors) at Wheaton College of Illinois in 1948. She then returned to the Keystone State and earned her Masters degree from Pennsylvania State University in 1950. For the next six years, Rusinko held a series of temporary academic posts at colleges throughout the United States. In 1959, she was appointed assistant professor of English at Bloomsburg University. Roughly a decade later she returned to Penn State for her PhD, working under the tutelage of Stanley Weintraub. She received that degree in 1971.

Having studied under one of the most well-known Shavian scholars in the country, Rusinko found her already keen interest in drama heightened, and her desire to write about the genre encouraged. She wrote in the mode of high scholarship, contributing almost 100 articles and reviews to journals such as Shaw Review, World Literature Today, and Modern Drama. She was asked to write for the Twayne series of shorter biographies on literary figures, completing biographies of British playwrights Terence Rattigan, Tom Stoppard, and Joe Orton. Moreover, shecontributed to many of the reference summaries of literary works, Masterplots. Finally, she edited a festschrift (a German word used to describe a collection of essays in tribute to another scholar's lifetime of achievement) in honor of her Penn State mentor, Stanley Weintraub.