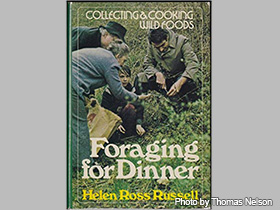 Science and education writer Helen Ross Russell was born in Lebanon County in 1915. Educated at Lebanon Valley College and Cornell University, Russell embarked on a collegiate-level academic career until 1966 when she left Fitchburg State College to pursue her writing. She is best known for her Ten Minute Field Trips: Using the School Grounds for Environmental Studies (1972), a book that has gone into multiple printings. She died in 2014.

Helen Ross Russell was born on February 21, 1915, in Myerstown, Pennsylvania. She wasthe daughter of George and Helen Ross. She earned her teaching certificate at age 19 from West Chester State College (now University). Ross would go on to earn her BAfrom Lebanon Valley College in 1943, having taught in the Lebanon County and Bethel Township schools. She earned a Masters degree at Cornell University in 1947, followed by her PhDat the same institution. Upon graduation, she was hired as a professor of biology by the Massachusetts State College at Fitchburg (now Fitchburg State College). She would serve that institution as the chair of the science department and later as the dean of studies. While at Fitchburg State, she met Robert S. Russell, an art professor, and married him in 1960. She left Fitchburg State in 1966, despite the warnings of her colleagues. She resigned her position in part to follow her husband to the New York metropolitan area, and partly to get out of administration and back to the teaching and writing she loved.

While she was at Fitchburg State, Russell was closely affiliated with the Junior Encyclopaedia Britannica. She wrote over 60 articles for that reference work, as well as serving as its science editor for 15 years. After leaving Fitchburg State, she consulted with the New York area's Wave Hill environmental site to teach teachers how to conduct field trips using the resources of their own school grounds. This project led to a commission from the New York City Department of Education to produce a film on the same subject, as well as her book Ten Minute Field Trips, published by the National Science Teachers Association. In addition to this guide for teachers, Russell wrotea number of science books for juveniles, including books on flora, fauna, and even on survival in the wild (1975's Foraging for Dinner). She also wrote over 80 articles for various periodicals as well as a syndicated weekly column, "In the Kitchen with Helen Ross Russell."

Dr. Russell livedin Jersey City with her husband, conducting workshops on nature appreciation throughout the United States, Canada, and England. She died in 2014.