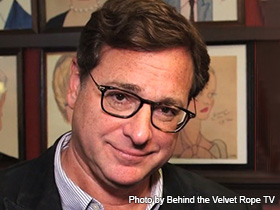 Comedian and actor Bob Saget is best known for his eight years on TV's Full House.

Comedian and actor Bob Saget was born on May 17, 1956, in Philadelphia. Although he grew up in Virginia and California, he returned to the Philadelphia area, graduating from Abington Senior High School and Temple University. His career spanned more than forty years in standup comedy and television, including work as a director and writer. He was best known for his role as "Danny Tanner" on the television series Full House. He also hosted America's Funniest Home Videos, narrated How I Met Your Mother, and was an advocate for scleroderma research. Saget died in Florida on January 9, 2022, while on tour.

Robert Lane Saget was born in Philadelphia on May 17, 1956 to Benjamin M. and Rosalyn C. ("Dolly") Saget. His grandparents were Jewish immigrants from Latvia and Russia. His father rose from being a butcher to becoming head of meats for Food Fair, a Pennsylvania-based grocery chain. The family followed Ben’s career; thus Bob spent his childhood in Virginia and California before returning to Pennsylvania and graduating from Abington Senior High School (ASHS). During Saget’s formative years, comedy became a coping mechanism for anxiety, loneliness, and sadness. As he describes in his memoir, several members of his extended family, including his older sisters Gay and Andrea, and twin siblings he never knew, died at young ages. Thus, comedy was "a means to avoid pain" and helped him survive (Saget, 2-3).

The Philadelphia area influenced Saget’s career in several crucial ways. Although he became interested in comedy as a child, watching Charlie Chaplin, Harold Lloyd, Jack Benny, and Burns and Allen with his father, he had initially planned to become a doctor. But Elayne Zimmerman, his English teacher at ASHS, recognized his comedic impulses and encouraged him to pursue a career in movies or writing instead. While at Temple University in the mid-late 1970s, Saget studied under Lew Klein, a pioneer in the broadcasting industry. Klein persuaded several contacts to pay attention to Saget’s films, one of which – Through Adam’s Eyes (1977), a documentary about a nephew who underwent facial reconstruction surgery – won a Student Academy Award. Early opportunities in comedy came at Stars, a club in Philadelphia's Queen Village neighborhood owned by Stephen Starr.

After graduating from Temple in 1978, Saget briefly enrolled in a graduate program at the University of Southern California but dropped out to pursue standup comedy full-time. He performed at various Los Angeles clubs then became the emcee at The Comedy Store. Over time, he met, learned from, and/or befriended many of the top comedians of the 1970s and 1980s, including Johnny Carson, Billy Crystal, Rodney Dangerfield, Andy Kaufman, Sam Kinison, David Letterman, Richard Pryor, Don Rickles, and Robin Williams. All the while, he absorbed as much about the craft as he could.

One commentator wrote that Saget was a "Jekyll-Hyde comedian who gleefully veered from the wholesome to the profane" (Smith). In truth, the range of comedic work that Saget participated in over the course of his career demonstrated the breadth of his talent and the many professional and friendly connections he cultivated. Saget’s first involvement with television was behind the scenes, warming up live audiences for a sitcom, Bosom Buddies (1980-1982). After more standup, he had a part on the short-lived CBS Morning Program (1987) before he landed a leading role in Full House, a show that initially aired on Tuesday nights before becoming part of ABC’s "Thank Goodness It’s Funny" Friday-night lineup. Full House did not receive critical acclaim, but it ran for eight seasons (1987-1995) and was widely syndicated. Thus Saget is frequently remembered as Danny Tanner, a warm-hearted widower raising three young daughters with the help of his brother-in-law Jesse (played by John Stamos) and best friend Joey (Dave Coulier). Full House’s unusual family structure and Tanner’s open affection toward his children set the show apart from other portrayals of fatherhood at the time. Saget reprised the role in Fuller House (2016-2020), which centered on oldest daughter DJ Tanner-Fuller (Candace Cameron Bure). In 2017, the sequel won a People’s Choice Award for Favorite Premium Comedy Series. Later, it won two Kids Choice Awards as well. Both awards attest to the longstanding nostalgia and ongoing interest viewers had in the story and its characters.

Another important role came in 1989 when Saget became the first host of America’s Funniest Home Videos (AFHV), a show conceived in an era when cutbacks in network production budgets and the rise of inexpensive recording technologies led to a weekly program centered around user-generated content – bloopers that everyday people caught with their own camcorders. Each week for eight seasons (1989-1997), Saget, Todd Thicke, and Robert Arnott wrote the jokes and filler material that Saget delivered. AFHV was a hit with Sunday evening viewers and as of this writing is the longest-running primetime entertainment show in ABC’s history. It can be understood as an ancestor of viral videos people share on social media.

Saget was no one-hit (or two-hit) wonder, however. He continued to work on other projects in the 2000s and beyond. One noteworthy television role was Ted Mosby, the unseen narrator of How I Met Your Mother (2005-2014). Saget also parodied himself on several episodes of Entourage (2004-2011). His contacts in the entertainment industry led to a gig hosting the gameshow 1 vs. 100 (2006-2008) and his first Broadway role, "Man in Chair," in the award-winning play The Drowsy Chaperone (2006-2007). He made guest appearances on Law and Order (2006, 2011), The Masked Singer (2020), and other shows as well. In the final decade of his life, Saget returned to standup comedy. That’s What I’m Talkin’ About, a recording of a performance he gave in Seattle in 2013, was nominated for a Grammy (Best Comedy Album). In Dirty Daddy, he explained that standup was one of his most important relationships, a space where "you can be lonely but you’re not alone" (241). In January 2022, Saget was on tour in Florida when a head injury ended his life.

In the weeks following Saget’s death, tributes emphasized both his comedic talent and his kindness toward others. In his memoir, he recalled learning from his father that "nothing means more than the primary relationships in our lives" (28) and he dedicated the book to his daughters Aubrey, Lara, and Jennifer (through his first marriage with Sherri Kramer). After many years of single fatherhood, Saget married Kelly Rizzo. His closeness to family and concern for others found expression in his career. In addition to Through Adam’s Eyes (described above), Saget produced and directed For Hope (1996), a movie about his sister Gay’s struggle with scleroderma, a group of diseases that cause hardening of the skin and can cause problems in other parts of the body. He was a powerful advocate for the Scleroderma Research Foundation (SRF), an organization that sought (and continues to seek) more effective treatments for those who suffer from it. After a performance at SRF’s Cool Comedy Hot Cuisine fundraiser, Saget became a board member, organized the annual event, and ultimately raised more than $25 million for the foundation. He returned to Pennsylvania periodically for events related to Temple University and took other opportunities to promote his home state. At the time of Saget’s death, Temple University called him its "Funniest Owl" (Orbanek). He was a funny Pennsylvanian, too.