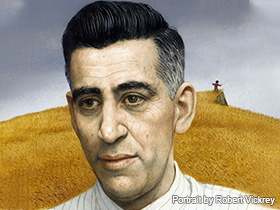 Author of The Catcher in the Rye and a number of short stories, J.D. Salinger attended Valley Forge Military Academy in Wayne.

On January 1, 1919, J.D. (Jerome David) Salinger was born in New York City to Sol Salinger and Miriam Jillich Salinger. In 1932, J.D. enrolled in the McBurney School of Manhattan, New York, and two years later transferred to Valley Forge Military Academy in Wayne, Pennsylvania. He graduated in 1936, then briefly attended New York University, Ursinus College, and Columbia University—without receiving any degrees—before serving as the entertainment director aboard the MS Kungsholm, a Swedish cruise ship that toured the Caribbean. Salinger was drafted into the U.S. Army in 1942, rising from the rank of infantryman to Staff Sergeant, and served in five European campaigns. Just after the war, in Europe in 1945, he allegedly married a woman named Sylvia; because Salinger strives to guard his private life, few facts about the relationship are certain. The two divorced in 1947, and Salinger married Claire Douglas in 1955. Salinger and Douglas had two children, Margaret Ann and Matthew, before they divorced in 1967.

In his youth, Salinger aspired to be an actor. He participated in productions at the McBurney School, often playing female parts. While he attended McBurney he also wrote for the school newspaper, but it was not until he transferred to Valley Forge that Salinger became truly involved in writing. He continued to perform—in the Mask and Spur dramatic organization—but became more interested in literary endeavors: he started to write fiction and agreed to edit the school yearbook, Crossed Sabers, in which he published his own poetic tribute to the academy. After graduation, Salinger spent nine weeks attending Ursinus College, in Collegeville, where he wrote the column "Skipped Diploma" for the student newspaper. He then took Whit Burnett's class on short-story writing at Columbia. Burnett was also editor of Story, the magazine that launched Salinger's writing career in writing with the publication of his first short story, "The Young Folks, " in 1940.

With the 1951 publication of his only novel, The Catcher in the Rye, Salinger was transformed, against his will, into a literary icon. Written from the perspective of an insightful youth, who resembled Mark Twain's Huckleberry Finn, this novel established a model for self-discovery in American fiction. Prior to its release, Salinger had published an assortment of short stories in different magazines. These stories were experiments for the novel: several, such as "Slight Rebellion off Madison " and "The Last Day of the Last Furlough, " depict scenes or characters that ultimately became part of The Catcher in the Rye. The similarities between the novel's fictional Pencey Prep and Valley Forge Military Academy suggest that Salinger's experience there served as an important source of material for his work.

In 1953, Salinger collected nine of his 30 short stories into a book entitled Nine Stories, which received positive reviews. Though the stories do not involve the same characters, they share thematic elements similar to a cycle of short stories. Following Nine Stories, Salinger's stories focus on the members of the Glass family. He later printed two pairs of these stories as books: Franny and Zooey in 1961 and Raise High the Roof Beam, Carpenters; and Seymour: An Introduction in 1963. Salinger's last short story, "Hapworth 16, 1924, " narrated by the Seymour Glass character, was published in 1965.

As the popularity of The Catcher in the Rye grew, Salinger quickly became the focus of unwelcome attention. Consequently, he withdrew from literary and public society. Since 1965 he has been a recluse, preferring the privacy of his home in Cornish, New Hampshire, to a public life. This self-imposed isolation has since achieved a certain notoriety of its own. In W.P. Kinsella's 1982 novel Shoeless Joe, the main character, Ray Kinsella, pursues and kidnaps Salinger. In the 1989 release of Field of Dreams, the novel's film adaptation, Salinger's character was replaced with a fictional, but distinctly similar, reclusive novelist for legal reasons. Gus Van Sant's film Finding Forrester, released in 2000, also includes a fictional novelist who, like Salinger, withdrew from society after achieving fame.

Salinger continues to avoid the press and abstain from publication. Twice he has filed and won legal suits against unauthorized publication of his work, the first for a collection of short stories, and the second, a biography. During his deposition for the latter suit, Salinger admitted that he continues to write fiction.