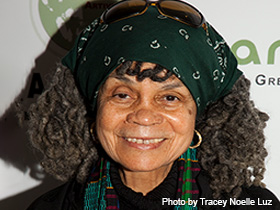 Born in Birmingham, Alabama, Sonia Sanchez is best known as a Black rights activist and poet. In the 1960s, Sanchez gained recognition for her controversial poetry, which expressed her frustration at a lack of Black voices in contemporary American culture, looking to inform and educate others about the Black experience. She has taught at various universities, retiring from Temple University in 1999, where she held the Laura H. Carnell Chair in English. Sanchez has received numerous awards throughout her career and has inspired many with her genuine love of teaching and writing. At the time of this writing, she lives in Philadelphia.

Sonia Sanchez was born Wilsonia Benita Driver on September 9, 1934, in Birmingham, Alabama, to Wilson and Lena Driver. When Sanchez was only one year old, her mother died, and she and her sister spent their childhoods living with different relatives. The sisters finally settled into a home when they moved to Harlem with their father in 1943, an environment that would greatly influence Sanchez. While in New York, Sanchez attended public school and received a Bachelor of Arts degree from Hunter College in 1955.

Sanchez then began graduate studies at New York University (NYU), where she studied poetry with Louise Bogan for a year. While at NYU, she participated in a writer's workshop held in Greenwich Village and attended by poets Amiri Baraka, Haki R. Madhubuti, and Larry Neal. She married and soon divorced Albert Sanchez during this time, whose surname she continues to use when writing. She and Albert had one daughter together, named Anita. In 1968, Sanchez married poet and activist, Etheridge Knight. Although this union also ended in divorce by 1970, Sanchez and Knight had two children: Morani Neusi and Mungu Neusi.

The 1960s marked the height of the Civil Rights Movement and the emergence of Sanchez as an influential poet, writer, and political activist. Initially, Sanchez supported the philosophy of the Congress of Racial Equality (CORE) by approaching Civil Rights from an integrationist stance. However, after encountering the work of Malcolm X and other radical activists in the Black community, her work reflected a separationist standpoint.

This voice is present in her earliest poetry collections, Home Coming (1969) and We a BaddDDD People (1970), both of which featured experimental forms, African American Vernacular English (AAVE), and uniquely Black perspectives. These aspects would become integral to most of Sanchez’s work. Sanchez used her controversial poetry to express her contempt for the American Anglo-centric school system, while also offering suggestions on ways to improve education and to advocate for the study of African people and culture as a discipline. Sanchez produced many other poetry collections, including A Blues Book for Blue Black Magical Women (1974), homegirls & handgrenades (1984), and does Your House have LionS? (1997), the latter of which is a groundbreaking autobiographical collection chronicling her brother’s life in the gay subculture of New York and his subsequent death in the AIDS crisis.

Although she is best known for her poetry, Sanchez has also dabbled in other genres of work. She wrote three children's books and established herself as a playwright with pieces including: Black Cats Back and Uneasy Landings (1995), The Bronx is Next (1970), and Uh Huh: But How Do It Free Us? (1975). All of these plays explored perspectives and issues unique to the Black community, including interracial racism and sexism within the community, as well as expressions of power and pride in the Black identity. Sanchez showcases the work of other African American literary figures in anthologies: We Be Word Sorcerers: 25 Stories by Black Americans (1973) and Three Hundred Sixty Degrees of Blackness Comin' at You (1971).

Her genuine concern for young people and her students has earned her praise as a creative and caring professor who constantly inspires others by her life and work. In 1977, Sanchez was the first Presidential Fellow and held the Laura H. Carnell Chair in English at Philadelphia's Temple University until her retirement in 1999. Sanchez has lectured at more than five hundred universities and colleges in the United States and abroad. She has read her poetry in Africa, Cuba, England, the Caribbean, Australia, Nicaragua, The People's Republic of China, Norway, and Canada.

Sanchez has received many awards and honors, including the PEN Writing Award in 1969 (a prestigious award for poets, playwrights, essayists, editors, and novelists), the National Academy of Arts and Letters Award, the National Endowment for the Arts Fellowship from 1978 to 1979, and the National Education Association Award from 1977 to 1988. For homegirls & handgrenades, she won an American Book Award for Poetry in 1985. In addition, Sanchez is the recipient of the Community Service Award from the National Black Caucus of State Legislators, the Lucretia Mott Award, the Outstanding Arts Award from the Pennsylvania Coalition of 100 Black Women, the Peace and Freedom Award from Women International League for Peace and Freedom (WILPF), the Pennsylvania Governor's Award for Excellence in the Humanities, and a Pew Fellowship in the Arts.

Sanchez is one of 20 Black women honored and featured in an interactive exhibition entitled "Freedom Sisters." "Freedom Sisters" was formed by the Cincinnati Museum Center and Smithsonian Institution. At the time of this writing, Sonia Sanchez resides in Philadelphia, Pennsylvania, and continues to be politically active while also giving readings of her work.  Sanchez has also been actively protesting with an anti-war group called the “Granny Peace Brigade.”