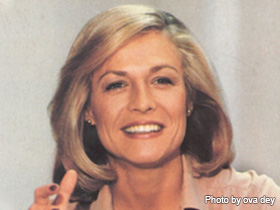 Jessica Savitch was a television reporter and anchor in the 1970s and early '80s.

Born in Kennett Square in 1947, Jessica Beth Savitch was a weekend anchor for KYW-TV in Philadelphia. She eventually joined NBC News as an anchor and Washington correspondent. Throughout Savitch's career, she won four Emmy's. In 1981, she married Donald Rollie Payne, who committed suicide within the first year of their marriage. Savitch allegedly began struggling with drugs, which was demonstrated to the nation as she anchored a live News Update under the influence of an unknown substance. Twenty days later, Jessica Savitch drowned in a car accident in New Hope, Pennsylvania, on October 23, 1983.

Jessica Beth Savitch was born February 1, 1947, in Kennett Square, Pennsylvania. The eldest daughter of David Savitch, a clothing merchant and Florence Spadoni, a registered nurse. It seems that Savitch was immediately drawn to the spotlight, reportedly speaking her first words at eight months old. She attributed her early passion for media to her father, who insisted that dinner conversation focus on current events. During his last months, one of the only activities he could embrace was watching television. Savitch fondly accompanied him in front of the television until his death when she was 12-years-old. Such an event dramatically impacted the Savitch's life; Florence felt a need to be near her family and moved her daughters to Margate, New Jersey.

Once in Margate, Florence began working as a registered nurse. Savitch attended Atlantic City High School, which was somewhat of a shock after spending most of her life in a small homogenous town. During sophomore year, Savitch met Steve Berger who worked at WOND, a local ABC radio affiliate. She requested to accompany him to the station one day where he allowed her to record his introductions. Savitch found her passion and was the first regularly scheduled on-air female in the region. Such a desire left her spending most of her free time at WOND.

After graduating from Atlantic City High School, Jessica Savitch attended Ithaca College, where she completed a degree in communications in 1968. While attending college, Savitch was faced with the first of many challenges that relate to a male-dominated field. She applied for a position with the campus radio station and was told there was no space for women. She quickly complained to the college administrator who granted Savitch the position. She was fired shortly after when she failed to turn off the stations transmitter after sign-off. Apparently, she was never told that such a task was part of her duties. Eventually, Savitch found a different position working as a disc jockey for WBBF-AM. Fondly titled "Honeybee," she quickly gained popularity with the local community. Savitch also worked as a model and an on-camera commercial announcer in order to fund her education.

Shortly after graduation in 1968, Jessica Savitch was hired by Joan Showalter as an administrative assistant at WCBS radio. Showalter was the personnel director for CBS and Savitch came to admiringly call her "mentor." Savitch received television tips from professionals at the station and began applying to jobs all over the United States. The only response received was from Houston CBS affiliate KHOU-TV, where Savitch worked from 1970-1972 as a general assignment reporter and weekend anchor. Upon Savitch's first weeks of employment, cameramen did not want to work with her, presumably for being a female. It was not until Savitch was burnt when a derailed tank car exploded that she finally received recognition.

In November 1972, Savitch began working for KYW-TV in Philadelphia. She was strictly a weekend anchor and never permitted to substitute for the prime time positions. Such a privilege was left to the male anchors. Savitch attempted to get out of her five year contract but failed. Her next endeavor was the Philadelphia police. Despite accusations of lack of strength, Savitch completed the Philadelphia police training course. Savitch's police involvements led to her completion of a five part series on rape. "Rape: The Ultimate Violation," was influential for changing rape laws and won the 1974 Clarion Award from Women in Communications, Inc.

In 1977, Jessica Savitch joined NBC News. She took on the position of Washington correspondent for the senate and anchor on "Sunday Night News" and "Update." Corresponding for the senate was different than the anchoring position Savitch was used to and some said she struggled to adjust. In Almost Golden: Jessica Savitch and the Selling of Television News, Gwenda Blair quotes Gil Milstein, the news editor at 30 rock who had worked closely with David Brinkley and now edited Savitch's scripts, as saying, "...it took him next to no time to decide that Jessica Savitch was an illiterate piece of local fluff." Similar opinions of Savitch seemed to circulate throughout the NBC news staff. Despite negative comments, two years later, Savitch was selected to do Prime Time Sunday. Her breakthrough came the following year when Savitch anchored the House and gubernatorial desk on election night. Also in 1980, Savitch married Philadelphia advertising executive, Melvin Korn. However, the marriage ended abruptly in divorce within the same year.

One year later, Savitch married Donald Rollie Payne, a gynecologist in Washington, DC. Unfortunately, four months into the marriage, Savitch experienced a miscarriage. Shortly after, her husband committed suicide after becoming aware of a diagnosis of incurable cancer. Savitch responded to these devastating events by requesting to be transferred to NBC's New York City bureau. After the experience of several tragic events, Jessica Savitch wrote Anchorwoman, an autobiography published in 1982. By 1983, Savitch had a new contract with NBC and was assigned the privilege to cover the 1984 elections.

Allegedly struggling with drugs at this time, Savitch anchored a live 43 second News Update on October 3, 1983, where she slurred some words and skipped others entirely. Twenty days later, on October 23, 1983, Savitch had dinner in New Hope, Pennsylvania, with Martin Fishbein, who was the vice president and assistant general manager of the New York Post. After dinner, Savitch entered Martin's car in the midst of a heavy rainstorm. Martin attempted to exit the restaurant parking lot but, potentially due to a lack of visibility, overturned the car into the Delaware Canal. Both drowned.

To this day, Savitch is remembered as one of the most popular anchorwomen of her time. She has received much recognition for her television work acquiring four Emmys, an Alfred I. DuPont-Columbia University Award, and election to the board of trustees at Ithaca College. Despite controversial opinions, many viewed Jessica Savitch as a role model for the women's movement and admired her drive to succeed in a male-dominated profession.