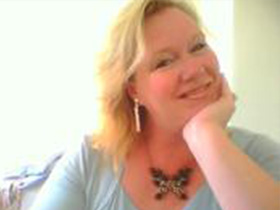 Melanie Simms was the 2005 Perry County Laureate in Pennsylvania and has had work published in hundreds of journals. Her poem, "Sunbury," is an ode to the town for which it's titled and has received airtime and been printed on multiple occasions. To date, Simms' books include, Waking the Muse: A Collection of Poems (2007) and Remember the Sun: Poems of Nature and Inspiration (2014). At the time of this writing, she continues write and present her works as a proud resident of Sunbury.

Melanie Simms was born on March 29, 1966, in Hartford, Connecticut, to Elinor Dunbar Hampton Melvin — a concert pianist, poet, university teacher, and newspaper editor — and George "Joe" Melvin Sr. — a Navy veteran who won awards for his marksmanship and archery.

In an interview with WVIA Public Radio host, Erika Funke, Simms says she moved to Sunbury, Pennsylvania (PA), when she was "a bit out of place, out of sorts." She had just lost her father, and then her mother five months later. They had been married 47 years. Simms was in the process of transferring to another college and navigating life on her own. "Everywhere I went," she says of Sunbury, "I just felt welcomed. ... I was immediately embraced by the people here and that of course drew me to feel attached to the community. And also the beauty, the history of Sunbury. I was very interested."

"Sunbury," one of her most popular poems, drew from that period in her life. "I had just lost both of my parents...," she recalls to Witf radio host, Cary Burkett. "[O]ften times couples do that, you know, one doesn't survive without the other. And so I was coming from a place of feeling a little bit orphaned, majorly orphaned, and Sunbury was where I decided to move." The poem named for the city, in addition to being published in the Susquehanna Life Magazine, The Daily Item, and The York Daily Record, has received airtime on several stations, including National Public Radio (NPR) and Garrison Keillor's A Prairie Home Companion, according to Simms' website. A copy of the poem is also displayed in the Sunbury District office of Representative Lynda Schlegel-Culver.

"There's a quaintness about the town that's unique," she tells Funke, "that doesn't feel like you're going to any old town. You really feel a presence about Sunbury. You feel like there's something very unique about the energy there."

Mark Lawrence of WKOKNewsradio says that Simms "is a Sunbury proponent and she shows it through her art." Simms explains that relationships, especially those rooted in Pennsylvania, inspire her. "My father was in the military," she says, "and I traveled a lot, so I had the opportunity to make observations and see cultural changes. One of the things that stands out about Pennsylvania, and I try to put in my poetry, is how we relate to one another. We are a real community."

In conversation with Burkett, she shares that her piece "Collisions, New Bloomfield, PA" was a response to "something that happened in New Bloomfield, PA, and I was there when it occurred. ... I think a lot of people who went through this experience probably found themselves unable to forget it."

Simms has published over 200 poems in numerous literary magazines, newspapers, and literary journals, including: The Pittsburgh Post-Gazette, Inside Pennsylvania, Susquehanna Life Magazine, and Santa Cruz Sentinel. She has received a Sophie Award and a Vermont Writer's Studio Scholarship for her poetry, and was a finalist for the Richard Savage Award from Bloomsburg University, among other honors that include being listed in Marquis Who's Who of the World and Cambridge Who's Who of Women in Publication.

In 2005, Simms was named Poet Laureate of Perry County and served with distinction. Her goal while serving, she tells Burkett, was "to reinvigorate the poet laureate post." She considers the role essential to societal wellbeing. "It's a valuable and profound tool for philosophical research into internal struggles between government and society, especially during wartime," she says. "The Laureate post comes with tremendous responsibility, and I really feel it offers a limitless potential for incorporating the arts and poetry into a vehicle for political introspection, healing, and social unification." She goes on to say that children need to be taught creativity just as much as they need to be taught subjects such as math, science, and medicine "because creativity is the impetus for development of those sciences."

A seasoned public speaker, Simms has read her work and/or delivered presentations in several venues and media outlets, including the Degenstein Community Library, Sunbury River Festival, Bloomsburg Public Library, Harrisburg Capitol (with first Lady Susan Corbett in attendance), and "Tell Me a Story" with Joy Hockman on Scranton's WFTE radio, to name a few.

The poems collected in Simms' first book, Waking the Muse (2007), "capture the various lights and shadows that compromise the complex and always mysterious timbres of her life—the dissonant sorrows and the rainbow dream," says 2004-2009 Poet Laureate of Maryland, Machael S. Glaser. "Waking the Muse is an ode to the constant hope of the morning sun."

Simms credits her college professor, Dr. David Sullivan, for encouraging her creative journey, as well as for her decision on the title for her first book. "David just really knew how to reach me," she says. "I have ADD, an attention-deficit thing... [David] said, 'Look, whatever you are, a person can be creative and express themselves whatever disabilities or issues they have. So that's why I titled it [Waking the Muse]. For me it was a real awakening. It really taught me that individuality is a precious thing."

Her second book, Remember the Sun: Poems of Nature and Inspiration (2014), includes the wellknown "Sunbury," as well as "Ode to a Lover on the Susquehanna" and "Beauty and Magic at Barone." Simms is also the creator and coeditor, with Missi McLaren Ritter and Carla Christopher, of An Anthology of Pennsylvania Poet Laureates (2015) — a literary history of PA as told through the work of its poet laureates, according to the publisher's website.

"Melanie Simms is a poetic force of nature," says Bloomsburg University English Professor, Jerry Wemple. "She has unbridled enthusiasm for the craft of poetry, and for the promotion of poetry. She is an impressive poet and person."

At the time of this writing, Simms continues to live and write in Sunbury, PA, and says, "I think Pennsylvania in itself really supports the arts more than perhaps many other places do."