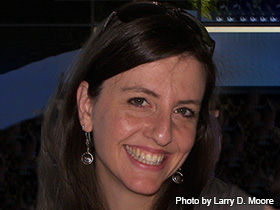 On September 19, 1972, Rebecca Skloot was born to Floyd Skloot and Betsy McCarthy in Springfield, Illinois. Skloot, an award winning narrative science writer, earned her B.S. in biological sciences from Colorado State University and an MFA in creative nonfiction from the University of Pittsburgh. A creative writing teacher and a science writer contributing to various publications, Skloot became well-known after her New York Times bestselling book, The Immortal Life of Henrietta Lacks, was published. She founded The Henrietta Lacks Foundation and continues to be actively involved as president. Rebecca Skloot currently lives in Chicago, Illinois, but she travels frequently to give talks on various subjects and to write in her West Virginia home.

Rebecca Skloot is the only child born to Floyd Skloot, a writer, and Betsy McCarthy, a hospital administrator and professional knitter, in Springfield, Illinois. The family moved to Portland, Oregon, where Skloot failed her first year of high school. Proclaiming herself as a "derelict kid," Skloot had issues with the traditional school system and went on to attend an alternative, "hippie" school, where she thrived.

Skloot also attended community college to make up lost high school credits, where she first learned about HeLa cells from her biology instructor, sparking an extra credit assignment that eventually evolved into an intensive decade-long research and writing project. Her instructor mentioned that scientists cultured a certain line of cells, HeLa cells, that were immortal and used in research worldwide. Skloot's interest was piqued when the teacher mentioned that HeLa cells came from a black woman named Henrietta Lacks, but she found the information (or lack thereof) on her to be inadequate. Her curiosity inspired her to do further research for a little extra credit, but her passion for the facts behind the story turned it into a much bigger project, particularly later on when she was working on her MFA in creative writing.

Rebecca Skloot discovered her knack for writing at Colorado State University, where she was studying biological sciences but stumbled upon a creative writing class that fulfilled an arts credit. Her teacher suggested she combine her talents and passions for writing and science,"because there aren't many people who do both science and writing and can do it well." She graduated with her B.S. in biological science in 1997, but continued to find herself at the intersection of science and journalism for many years. She went on to obtain her MFA in creative writing from the University of Pittsburgh, graduating in 2008. In order to earn her MFA, Skloot was required to write a manuscript. Her initial topic was 'Forgotten Women in Science,' but she soon realized that Henrietta Lacks's unknown history was extensive enough to fill a manuscript on its own.

Through her in depth research and countless interviews with the Lacks family and scientists, a process that spanned over ten years, Rebecca Skloot began to unfold the full story. Henrietta Lacks, an African American woman from Virginia, was treated for cervical cancer at Johns Hopkins Hospital, but succumbed to the disease in 1951. During the course of her treatment, doctors harvested some of her cancer cells without her knowledge or permission. These cells were then used to develop the first human cell culture to replicate on their own in a laboratory. The cultured cells' ability to multiply endlessly, thus making them immortal, enabled a new industry centering on the mass production of human cells to reach great heights. Because of HeLa cells, researchers have been able to make leaps and bounds in the field of scientific discovery. Among many others, HeLa cells have been used to create cancer treatments, the polio vaccine, in vitro fertilization, as well as aided in the discovery of chromosomes and cloning technology.

Because the doctors never asked for Henrietta Lacks's consent, her role in medical advancement remained largely unknown, even to her own family. In fact, many of Lacks's descendants do not have health insurance, even though her cells allowed for the creation of a multibillion dollar cell and human tissue industry, raising several bioethical questions. It took Skloot a very long time to earn the Lacks family's trust, especially since they had been taken advantage of by others many times before. Skloot ended up gaining the family's trust, growing increasingly closer to them, particularly Deborah, Lacks's youngest daughter. Their story of suffering, broken and empty promises, and pain is essential to the book's overall message and the larger questions the book leaves readers asking. In order to give back to the family, Rebecca Skloot founded The Henrietta Lacks Foundation, an organization with the goal of raising money for scholarship funds and health insurance for Lacks's descendants.

Rebecca Skloot's book delves into many aspects of the complicated history, weaving together science, medicine, ethical questions, and family testimonies. She says she was concerned with truth and balance, as well as readers gaining an understanding of the scientific impact as well as the impact of the Lacks family's suffering.

The first day The Immortal Life of Henrietta Lacks went on sale, it sold out, causing a the publisher rush order additional copies. Skloot won several accolades for her groundbreaking debut book, including more than 60 media outlets naming it a best book of 2010. Skloot's New York Times bestselling book is being adapted into a young reader edition and translated into over 25 languages. Furthermore, Oprah Winfrey and Alan Ball are adapting it into an HBO movie. She was named One of Five Surprising Leaders of 2010 by the Washington Post.

Skloot taught science journalism and creative writing at the University of Memphis, the University of Pittsburgh, and New York University. She has been published in Discover and Popular Science, The New York Times Magazine, and O, The Oprah Magazine. Additionally, she served on the National Book Critics Circle board of directors for eight years. In the past, she also took on the role of correspondent for WNYC's Radiolab and PBS's Nova ScienceNOW. Most recently, she and her father co-edited The Best American Science Writing 2011.

Rebecca Skloot currently resides in Chicago, Illinois, although she regularly travels to give talks on various subjects, such as bioethics and book proposals, at conferences and universities across the nation. She also routinely ventures to West Virginia to write.