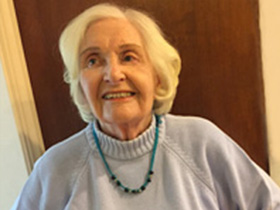 An honored writer of YA fiction and nonfiction alike, Gloria Skurzynski was born in Duquesne.

Born in Duquesne, Pennsylvania on July 6, 1930, Gloria Skurzynski grew up around the steel industry during the Great Depression. Persuaded to write by Pulitzer Prize-winning poet Phyllis McGinley and receiving numerous rejects from various publications, Skurzynski would go on to produce more than 60 books for children. Her works address subjects like history, folktales, science and technology, and the natural world.

Gloria Joan Skurzynski, daughter of steelworker Aylmer Kearney Flister and telegraph operator Serena (Decker) Flister, was born in Duquesne, Pennsylvania on July 6, 1930. Since her father held a secure job, the family managed to ease through the Great Depression. She frequently visited the library and the movies in building an appreciation for literature. In 1948, she attended Mount Mercy College (now Carlow University), a Catholic women's school. Uncomfortable with the restrictive education environment, she quit after her sophomore year and served as a statistical clerk for U.S. Steel in Pittsburgh (1950-1952).

She married Edward Joseph Skurzynski, a college senior and future aerospace engineer in the space program, in December of 1951. They had five children in the 1950s: Serena Rose, Janine, Joan, Alane (a future author herself), and Lauren. Her husband transferred to Utah, where the family lived in Salt Lake City. Through a series of fan mail exchanges between Skurzynski and Pulitzer Prize-winning poet Phyllis McGinley, she was convinced to take up writing as a profession. After a year and a half and 58 submissions to various publications, she finally published a short story in Teen magazine. Skurzynski would later contribute to Teen and School Library Journal magazines.

Gloria Skurzynski has authored more than 60 books for young readers. Her first widely-acclaimed novel, What Happened in Hamelin (1979), concerns the classic Pied Piper folktale of Hamelin, Germany from the 13th Century, here told from the perspective of a former baker's assistant named Geist and how he becomes the Pied Piper's apprentice. Kirkus Reviews opines that Skurzynski "has done a good job of slipping in the necessary background conditions and, more important, of bringing Hamelin to life and making a likely, likable story of Geist's involvement."

In The Tempering (1983), a student named Karl wonders if he should drop out of school to get a job at a steel mill in 1912 Canaan, a fictional counterpart of Skurzynski's own Duquesne, Pennsylvania. Martha Bennet Stiles of the New York Times writes that "Although told without literary elegance, 'The Tempering' is a continuously suspenseful story. It depicts the jealously and suspicion that are natural in a town where everyone lives close to ruin, and where many different ethnic groups don't always know each other's customs and often lack a common language." A later novel, Good-bye, Billy Radish (1992), examines the town of Canaan during the World War I era.

Skurzynski returned to more historical subjects with her 1999 book Spider's Voice, about the twelfth Century medieval lovers Abelard and Heloise, told here from a servant's perspective. Barbara Scotto of School Library Journal notes that "The story is complicated and compelling, full of drama, love, and violence. Occasionally credibility is strained by the twists of the plot. Nonetheless, Skurzynski is masterful in her characterizations, showing the subtleties of each person's nature and the ways in which they are changed by the circumstances of their lives." Diane Rowback of Publishers Weekly says Skurzynski "doesn't flinch from her often distressing subject matter, and her characterizations are complex, doing justice to the courage and passion of her protagonists." Ilene Cooper of The Booklist comments as well: "Skurzynski's writing is vivid and intriguing. Unlike characters in some historical fiction, those here do not seem as though they are modern-day people plunked down in another era. She successfully paints a world very different from the one we know, with different morals mores, and culture."

Wolf Stalker (1997), a Yellowstone National Park mystery about the killing of reintroduced wolves, was the first novel published by the National Geographic Society. It is the first in the "Mysteries in Our National Parks" series about sibling characters Jack and Ashley Landon investigating strange happenings involving park wildlife, with each book in the series devoted to a different national park. Gloria Skurzynski collaborated with her daughter Alane Ferguson in writing the series, doing technical research while Alane composed dialogue. Marlene Gawron of School Library Journal writes that "This exciting book emphasizes the natural beauty and dangers of the wild...A new mystery series gets off to a great start." Elizabeth Drennan of The Booklist adds that "The characters are believably capable...Unfortunately, the environmental message sometimes gets a little heavy-handed." This series now includes thirteen novels, and is approved and promoted by the National Park Trust.

A quartet of science fiction novels titled The Virtual War Chronologs was published by Simon and Schuster/Atheneum between 1995 and 2006. The titles include Virtual War; The Clones; The Revolt; and The Choice.

With her interests in science and technology as well, Skurzynski has produced nonfiction books like Bionic Parts for People: The Real Story of Artificial Organs and Replacement Parts (1978) and Almost the Real Thing: Simulation in Your High-Tech World (1991). Her science fiction works includes novels like Cyberstorm (1995) and the anthology Tomorrowland (1999). Her nonfiction book, Are We Alone?: Scientists Search for Life in Space (2004), discusses the Search for Extra-Terrestrial Intelligence (or SETI) program. Danielle J. Ford of The Horn Book Magazine writes that "Skurzynski cleanly separates what is scientifically possible from what is fantasy regarding life beyond our planet" and she "skillfully navigates the tricky terminology from multiple disciplines by using technical jargon in an understandable yet rigorous manner." Deborah Stevenson of the Bulletin of the Center for Children's Books comments that "The prose is sometimes a bit dry, and better use might have been made of images...but there's still plenty of life energy pulsating through the text."

Skurzynski's 2008 nonfiction book Sweat and Blood: A History of U.S. Labor Unions, published by Lerner, features a complete chapter on the history of the Homestead (PA) steel strike of 1892. A Booklist review says, "The history of labor unions is one filled with larger-than-life characters fighting to correct the wrongs of the few upon the many and with gripping humanistic dramas of class conflict brought on by the the imbalance of capital. This entry in the reliable People's History series begins with the roots of unionization in colonial America, cruises through the frenzy of industrialization in the twentieth century, and ends in the present day, where unions play less of a role but still provide 'the single best ticket into the middle class.'" The book was on VOYA's nonfiction honor list for 2008.

In April 2010, National Geographic published This Is Rocket Science: True Stories of the Risk-taking Scientists Who Figure Out Ways to Explore Beyond Earth. Reviewer Colleen Mondor says: "Gloria Skurzynski does something unique here by writing about the early development of rocket science itself, and includes the work of scientists from a variety of countries including Russia and Germany. This Is Rocket Science is a National Geographic title, so it is wonderfully designed with glossy full-color photographs and a graph paper background that reinforces the scientific nature of the text."

Devastation, published by Simon and Schuster/Atheneum in August 2010, combines Part 1, Virtual War, and Part 2, The Clones, of the earlier science-fiction quartet.

Skurzynski has held memberships to the International Women's Forum, the Society of Children's Book Writers and Illustrators, and the Utah Women's Forum. Her numerous awards include: a Horn Book Honor Book award, two Booklist Reviewer's Choice Awards, a Christopher Award, two Best Books for Young Adults Awards (ALA), Notable Children's Trade Book in the Field of Social Studies award from the National Council for the Social Studies and the Children's Book Council, a Golden Kite Award for fiction, one of School Library Journal Best Books of 1983 and 1992, a Utah Children's Choice Book Award, two Golden Spur Awards from the Western Writers of America, and a Science Writing Award from the American Institute of Physics.

On her website, Skurzynski explains her writing: "I find my way back home to the smoky, sooty, western Pennsylvania town where flames from smokestacks set fire to the night...in my own memory, and through the stories my parents told me, I can recreate that time and place. It's important that I do that, because if I don't, no one will remember the rumbles and shrieks of the mills, the smell of the smoke, the blaze of the furnaces, and the enormous power of the steel mills over the townspeople." At the time of this writing, Gloria Skurzynski lives in Boise, Idaho.