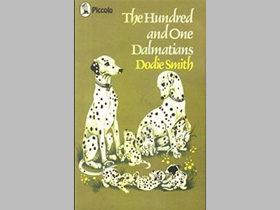 Best known for her children's book The One Hundred and One Dalmations (1955), Dodie Smith lived in Doylestown for some time.

Dorothy Gladys Smith, born in England on May 3, 1896. She began her career as a playwright with her first production, Autumn Crocuses (1931). After a series of successful plays, she made playwriting her main occupation. In 1935, her play Call it a Day had the longest run for a woman playwright, at fifteen months. After marrying Alec Beesley, she and her husband went to America, where, in Doylestown, Pennsylvania, she published her first novel, I Capture the Castle, in 1948. After moving back to England, she continued writing plays and also wrote two children's books, The One Hundred and One Dalmatians(1955) and its sequel The Starlight Barking (1967). Smith died in England in 1990 at age 94.

Dorothy Gladys Smith, better known as Dodie Smith, was born on May 3, 1896 in Whitefield, Lancashire, England. Her father, Earnest Walter Smith, a bank manager, succumbed to cancer when Smith was just eighteen months old. After his death, her mother, Ella Furber Smith, took her to Manchester, where they lived with her grandparents, three bachelor uncles, and two aunts. This move proved beneficial to the creative mind of young Dodie Smith, for everyone in that house was artistic in one way or another. They all played an instrument; her three uncles were rather successful amateur actors, and her grandmother had published a novel in 1885 entitled Britain's Slaves under the penname George Challis. "My family made a special climate all its own. The talk I listened to perpetually (and took part in) was about books, theatres, music, murder trials—the principle being that anything I could understand I was very welcome to overhear," Smith remembers in her autobiography Looking Back with Gratitude (1985). Thespian matters were central in the Furber household, and Smith soon joined her uncles on stage.

Smith wrote her first play at age ten. In her earliest appearance, at thirteen years old, she played an inn-keeper's boy in Le Courrier de Lyon. In 1910, her mother remarried and they moved to London, where her mother encouraged her to continue performing. She began studying in the Royal Academy of Dramatic Art in 1914 and subsequently performed professionally, first with the Pinero's Playgoers with fellow Royal Academy students, then with the Portsmouth Repertory Theater, and even with the YMCA during World War I, when she appeared to entertain the troops in France.

In 1923, Smith left the theater and took a position as a buyer for Heal and Son, a furniture company, where she remained for eight years. During this time she continued writing plays. In 1931, one of her former directors, Basil Dean, bought her play Autumn Crocuses (1931), written under the penname C. L. Anthony. "The romantic comedy," says Martha Hadsel of The Dictionary of Literary Biographies, "brought Smith immediate success because of its winning combination of an Alpine setting, humor, music, and a love story... The play focuses on a romantic interlude in the lives of a spinster English schoolmistress, thirty-five years old, and a married Tyrolean innkeeper. Smith surrounded this pair of lovers with a humorous company of tourists: the heroine's officious traveling companion, also a middle-aged schoolmistress; a mountain-climbing German couple; a faddish vicar and his absentminded sister; and an outspoken young couple living together 'in sin.'"

In 1932, Smith used her experience with Heal and Son for her second produced play, Service (1932), to give a department store setting realistic detail. Heal's staff suffered wage cuts during the Great Depression. Service is about a family business' owners and staff dealing with economic difficulties and struggling to salvage the store. It was the second play for which she used the pseudonym C. L. Anthony, and, like Autumn Crocuses, it was a success.

During a trip to Scotland, Dodie Smith found inspiration for her next play, Touch Wood, which was in production by 1934. Set in a hotel like the one Smith stayed in, the play features a couple returning to the site of their honeymoon, fifteen years before. It was another success, and she promptly followed it with Call it a Day in 1935.

Confident after three successes, she dropped the pseudonym and used her own name. Call it a Day takes place in one afternoon—the first day of spring. According to her biographer Valerie Grove, "It follows the members of a single family, the Hiltons, who are all in various states of temptation, proving the truth of the adage 'The first spring day is in the devil's pay.'" Call it a Day was a great success, with 500 performances at the Globe in London, as well as showings in New York. Smith was establishing herself as a serious playwright—Call it a Day had the longest run, at fifteen months, ever for a woman playwright.

Her next play, Bonnet over the Windmill (1937), was not as successful, and played only three months. Undiscouraged, Smith turned out a better fairing Dear Octopus in 1938. Dear Octopus followed the adult children of the Randolph family as they travel back home for their parents' fiftieth wedding anniversary. The rather odd title appears in a toast—"To the family—that dear octopus from whose tentacles we never quite escape, nor, in our inmost hearts, ever quite want to."

Smith and Alec Macbeth Beesley, a friend and business manager, traveled to America to help cast a production of Dear Octopus. In 1939, the two were married, and remained in the United States for the next fifteen years, spending most of their time in California—Beverly Hills, Malibu, and Carmel. In Carmel she began to work on her novel, I Capture the Castle. The story is romantic and tinged with sadness—two young sisters and their father, once a successful writer, move into the ruins of monstrous, old, and remote house in England. Two young men from America arrive and stir the hearts of the girls. While crafting this romance story, Smith also made serious comments about literature. In a conversation between the main character, Cassandra, and one of the American boys, Simon, Simon speaks "of some of the great innovations that had been resented at first—Beethoven's last quartets, and lots of modern music, and the work of many great painters that almost everyone now admires." The narrator goes on to say "There aren't as many innovations in literature as in the other arts, Simon said, and that is all the more reason why father ought to be encouraged."

She finished the novel in Doylestown, Bucks County, and it was published in 1948. Ridden with homesickness but also struck by the Pennsylvania landscape's natural beauty, Smith notes in her autobiography, Looking Back with Gratitude, "I am enjoying watching the change from winter to spring here. There was a spring in California; the blonde hills were suddenly bright green after the rains, but the contrast between seasons wasn't sharp enough for any emotional impact. And alas, even here, the chief emotional impact of the spring is that it makes me miss England more and more... Still, a garden, a pond, woods with a stream, bulbs coming up everywhere—and an old house—are better than anything I had at Malibu, beautiful as the sea, sunrise and sunset often were there."

I Capture the Castle was another success for Dodie Smith. She returned to England and kept writing plays and novels, as well as children's fiction. A longtime lover and defender of animals (she wouldn't even allow sticky flypaper in her home), it is no surprise that Smith chose to write about animals—The One Hundred and One Dalmatians (1955), and its sequel, The Starlight Barking(1967) tell the story of two Dalmatians, Pongo and Missus Pongo, their numerous puppies, and the furrier's wife, Cruella de Vil, who has her eye on their coats. In 1961, Walt Disney released a full-length animation of the tale.

"I write this sitting in the kitchen sink. That is, my feet are in it; the rest of me in on the draining-board, which I have padded with our dog's blanket and the tea-cosy... I have found sitting in a place where you have never sat before can be inspiring." The beginning paragraph of Dorothy Gladys Smith's first novel could be an image of the author herself, sitting and writing in her journal as she often did from her youth to her old age. In her later life, Smith began to assemble these journals and memories to produce a total of four autobiographies: Look Back with Love: A Manchester Childhood (1974), Look Back with Mixed Feelings (1978), Look Back with Astonishment (1979), and Look Back with Gratitude (1985), which follow her experiences from childhood to America and back to England.

Dodie Smith died in 1990, at ninety-four years. She was working on the fifth volume of her autobiography, which still has not been published. Valerie Grove, her biographer, remembers her obituary: "'Critically, she was probably under-valued. Dodie Smith had her own decided gift,' wrote The Times in her obituary. 'She could heighten the humours of daily life without being merely glib. She knew what would register in performance.'" Smith left a sum of money to the "utmost care and protection of Charley," her remaining pet Dalmatian.

"What fascinates me," Dodie wrote in one journal, "is how long I have been obsessed with getting my own life down on paper. I had thought that I only began attempting that when I started this journal in 1939. Now I see that I have been obsessed with the idea since I was a girl. Why? Has it always been a kind of compulsion neurosis? Or do I need to write my woes out of my system? Or does it all stem from something deeper? I am constantly trying to possess life, to save it up, to bring the then into now, and make it available for ever."