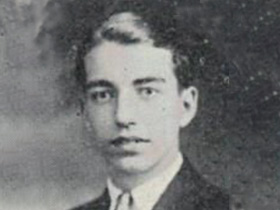 Snyder was a well-published historian. His work Union County Pennsylvania: A Celebration of History was posthumously re-released.

Born on February 13, 1909 in Glen Iron, Pennsylvania, Charles McCool Snyder was a historian and professor, most noted for his historical works about Pennsylvania history. Snyder received his B.A. and M.A. from Bucknell University in 1930 and 1933, respectively. He then went on to pursue a Ph.D. in politics from the University of Pennsylvania. After marrying Mary Burrowes, Snyder enlisted in the United States Navy from 1943-1945, eventually becoming lieutenant. Snyder then began teaching as a professor of history at SUNY Oswego from 1946 to 1973. Charles Snyder died on April 21, 1996 at the age of 87.

Charles M. Snyder was born Charles McCool Snyder on February 13, 1909 in Glen Iron, Pennsylvania. He was the son of Charles M. Snyder, a coal and lumber worker, and Flora (Fessenden) Snyder. In 1932, at the age of 23, Snyder married Mary Burrowes, and together they had three children: Sara Snyder Smith, Daniel M, and Elizabeth (now Mrs. Thomas Marston). In 1943 Snyder entered served in the U.S. Navy for 2 years, eventually becoming lieutenant. Snyder received his B.A. and M.A from Bucknell University in Lewisburg, PA and his Ph.D. from the University of Pennsylvania in Philadelphia, PA in 1949. From 1946-1973, Snyder worked as an assistant professor, associate professor, and a professor of history at the State University of New York College at Oswego before retiring in 1973.

Another popular book by Snyder was Buggy Town: An Era in American Transportation. This book detailed the automotive industry and the progression of buggy production and sales in Mifflinburg, Pennsylvania. Robert E. Carlson published a book review in Pennsylvania History: A Journal of Mid-Atlantic Studies that said, "An imaginative combination of many photographs, sketches, and the results of research into traditional historical sources interwoven with the testimony of numerous eyewitness participants make Charles M. Snyder's Buggy Town a most interesting and useful addition to our understanding of late nineteenth century and early twentieth-century Pennsylvania history." Snyder chronicled the buggy era that lasted from 1865 to 1915.