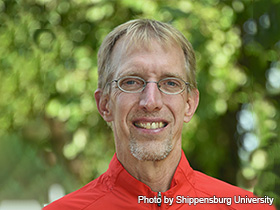 Steve Spence was born on May 9, 1962, in Elizabethtown, Pennsylvania. He went to Lower Dauphin High School, where he earned state rankings in the mile, 3000 meters, two mile, and cross country. After graduating Lower Dauphin, Spence earned seven All-American titles at Shippensburg University. After winning the 1991 World Championship Marathon, he ran the 1992 Olympic marathon trials. His win at the trials secured him a spot in the 1992 Olympic Marathon, where he placed twelfth. He is the Head Coach of cross country at Shippensburg University. He married Kirsten J. Harteis in 1989. They have three daughters: Margeaux, Neely, and Reynah, and one son, Eli. The family currently lives in Shippensburg, Pennsylvania.

Steven A. Spence was born on May 9, 1962, in Elizabethtown, Pennsylvania, to Dorothy Carson and Steven H. Spence. Spence first started running in 1976, when he entered Lower Dauphin Junior High School in Hummelstown, Pennsylvania. His introduction to running came while Spence prepared for upcoming basketball seasons. Although Spence's athletic aspirations initially were in basketball, the talent Spence discovered he had in distance running quickly redirected his focuses toward cross country and track. "A few girls seemed to think that was pretty cool," Spence wrote in reference to his racing. The talent Spence displayed in the distance events pushed Spence towards deciding to stick with distance running. In 1977, Spence placed 35th at the Pennsylvania Triple A Cross Country State Championship Meet. As a sophomore in high school, this was an impressive achievement. In 1978, he placed fifth at the Pennsylvania Outdoor Track and Field State Championship Meet in the 3200 meter race. He ran a time of 9:19. Also in 1978, Spence's junior year in cross country, he placed eighth at the Pennsylvania State Cross Country Championships. At the 1979 Pennsylvania Outdoor Track State Championships, Spence ran 9:17 in the 3200 meter. Cutting two seconds off his previous year's time, he placed third in the state of Pennsylvania for the triple A 3200. In the 1979 Pennsylvania State Championship Cross Country meet, Spence's senior year of high school, he placed twelfth. Spence's senior year outdoor track season proved to be an exciting one. At the Pennsylvania Outdoor Track State Championship meet, Spence ran 4:12.38 in the 1600 meters. This time earned Spence the Pennsylvania state title in the 1600, and it was fast enough to break the previous state record in the 1600. Spence's running experience at Lower Dauphin High School provided Spence with the opportunity to recognize his talents in the area of distance running and provided a good start for his future running career. After graduating from Lower Dauphin in 1985, Spence ran at Shippensburg University. During his time at Shippensburg University, he was an All-American in outdoor track in the 3000 meter race from 1981 through 1984. He also earned an All-American title once in indoor track and two times in cross country throughout his college career. Spence holds three school records at Shippensburg University in the 3,000 meter race, the 5,000 meter race, and the two mile relay. After graduating from Shippensburg University in 1985 with a Bachelor of Science degree in Business Administration, Spence ran some fast races. However, Spence's talent in the distance areas and his high mileage training paid off to an even greater degree when he ran a 2:16:10 at the 1988 Boston Marathon. Also during 1988, Spence was ranked third in Runner's World's Road Runner rankings. The next year, on November 22, 1989, Spence married Kirsten J. Harteis. Spence shaved almost four minutes off of his 1988 Boston Marathon time at the 1990 Columbus Marathon. Spence ran a personal best, winning the race with a time of 2:12:17. Great improvement in Spence's career came in 1991, at the World Championships Marathon in Tokyo, Japan. Despite the ridiculously humid and air polluted conditions, in a race that, according to the New York Times, 40 percent of racers never finished, Spence managed to place third overall. According to Runner's World, Spence seems to accredit his unexpected success in this race to being well prepared in terms of nutrition and hydration as well as race strategy. Because of the challenging conditions, Spence started the race slower than usual. Although many runners were ahead of him in the beginning of the 26.2 mile run, this proved to be a useful tactic when the weather conditions seemed to overtake them towards the end, giving Spence a third place finish. Two of the biggest races of Spence's career came only a year after the World Championships. In the 1992 Olympic marathon trials in Columbus, Ohio, Spence placed first with a time of 2:12:17. This is a very impressive time for the marathon. This qualified him for the 1992 Olympics in Barcelona, Italy. In Barcelona, Spence came down with the flu shortly before the 1992 Olympic Games. Despite this, he chose to race. Spence ran a time of 2:15:21. Even though Spence had run over three minutes faster shortly before this race, at the Olympic trials, this time was still fast enough to place twelfth. This was the highest any American marathon racer had finished in the Olympic Games since 1976. Throughout Spence's career, Shippensburg cross country and track have been a part of his life. In addition to marking up the Shippensburg record board as a student athlete, he coached cross country and track on a volunteer basis at the university for ten years between his graduation and 1997. In 1997, Spence retired from competitive racing and became Head Coach of track and cross country at Shippensburg. Since 1997, the men's outdoor track and field team has enjoyed three PSAC championships. In 1997, after only one year of Spence's coaching, the women's cross country team attained a PSAC as well as a NCAA championship in the Division II East region. Spence was titled the Pennsylvania State Athletic Conference (PSAC) Men's outdoor Track and Field Coach of the Year in 2003, 2004, and 2005. He received NCAA Division II East Region Men's Track and Field Coach of the Year honors in 2004 and in 2005. In 2003, Spence got back into racing. He now sets records in the Masters Division, the division for competitive racers older than 40. Steven Spence currently lives in Shippensburg, Pennsylvania, and is married to Kirsten J. Spence; the couple has four children. One of his daughters, Neely, attends Shippensburg University and is a four-time Division II national champion. Spence currently is the Head Coach of Shippensburg University's Cross Country Teams, a position he's held for over thirteen seasons. He also is an Assistant Coach for the Track and Field Teams.