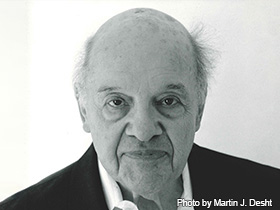 Winner of the National Book Award for Poetry, Gerald Stern was raised in Pittsburgh.

Stern was born in 1925 and raised in a Jewish household in Pittsburgh‚ a detail of his childhood that greatly influenced his life. He attended both the University of Pittsburgh and Columbia University, later teaching at both and at a variety of other colleges. Stern published his first collection in 1973 and went on to publish nearly 20 works of poetry and prose. Among his many honors, Stern was elected Chancellor of the Academy of American Poets in 2006, was awarded the Medal of Honor by the Academy of Arts and Letters in 2010, and received the 2012 Bobbitt National Prize for Poetry from the Library of Congress for his collection, Early Collected Poems: 1965-1992 (2010). At the time of this writing, Stern lives in Lambertville, New Jersey, with his companion Anne Marie Macari, where he continues to write poems on a daily basis.

On February 22, 1925, Harry and Ida Stern—Jewish immigrants from Ukraine and Poland, respectively—welcomed their son, Gerald Daniel Stern, into the world. Stern and his older sister, Sylvia, spent their childhoods in Pittsburgh, Pennsylvania, growing up in a Jewish household while anti-Semitism raged rampant on the streets. During an interview with David Hamilton for the Iowa Review in 1989, Stern recalls the influence of his Jewish upbringing, citing that his grandmother (maternal) played a predominant role during the years in which she lived with his family: "We had two sets of dishes. One for, you know, dairy foods, and the other for meat dishes. We had a separate set of dishes for Passover that were unearthed and unpacked and cleaned and prepared for that holiday."

Although the family later abandoned this Orthodox tradition for a more Conservative outlook, the years of regular service attendance, Hebrew school, and Bar Mitzvahs greatly influenced Stern's intellectual endeavors. The effect would become greatly evident in his later work. The loss of his sister also surfaces in his work. When Stern was eight-years-old, she succumbed to a battle with cerebrospinal meningitis, and the loss stunned him. This experience and its impact are referenced often in his work.

Stern enrolled in the undergraduate program at the University of Pittsburgh, but with no real direction. He eventually graduated in 1947 with a degree in Political Science, but lacked serious literary instruction other than that directed by personal interest. After a brief career in the military (during the last years of his undergraduate study) supplied him with adequate funds, Stern took a year off to begin reading more seriously, quickly establishing a background of dynamic and influential poets such as W. H. Auden, W. B. Yeats, Ezra Pound, Hart Crane, and Theodore Roethke. Stern then attended Columbia University's graduate program and by 1950 had obtained an MA in English. He spent a year in Europe, then returned to school at Columbia in pursuit of a PhD in literature while holding several positions, such as an English teacher and an interim headmaster at a Long Island school. He never fulfilled the degree requirements—the first sign of his growing impatience with the world of academia. The differences between the university-driven, scholarly realm of his adult life and the streets of his childhood would consistently haunt Stern in later years.

On September 12, 1952, Stern married Patricia Miller, and a year later, she joined him on his second trip to Europe. For the latter part of their three-year stay, Stern secured a teaching position in the English department at a Glasgow high school. When the couple returned to the United States in 1956, Stern took a position at Temple University in Philadelphia and began focusing on his writing career.

In 1973, Stern published his second book of poetry titled Rejoicings, and although the collection failed to earn any major literary prize or award, it is a book rich with imagery and recollection that reveals the strength of Stern's early voice. Throughout Rejoicings, Stern embraces the joy and freedom that comes from writing poetry. He references intellectual figures such as Immanuel Kant, Andrew Carnegie, and Friedrich Nietzsche, thus demonstrating his own intellectual capacity in subtle yet meaningful ways.

Stern may not have studied under a renowned mentor, but his personally-guided education has served him well. The poems in Rejoicings also make frequent mention of animals and the similarities between beast and man. In "Going North on 202," Stern explicitly compares the two by calling the other drivers "American lambs." Other examples include two short poems, "Goodbye, Morbid Bear" and "I Called the Wolf Josephus."

Goodbye, Morbid Bear
Goodbye, morbid bear; you will be waving your morbid arm forever,
forcing your way into the nursery of rhymes.

Most prominent in this era of Stern's writing is the presence of place. Nearly every poem in the collection is riddled with a geographical connection, whether it be Raubsville in Pennsylvania—his place of residence for several years—the shore of the Delaware River, or a small restaurant in New York City with round tables.

Burst of Wind between Broadway and the River
Between the eighth and the seventh avenue
I am hit in the face by a burst of wild air—
it is Nietszche again, disguised as dust.
Twenty seconds we slap each other's faces,
grip hands and break each other's backs.
I sort of trot up thirty-eighth past Lerner and Bear's
looking for the dairy restaurant in which my brain was stranded.
There at the little chairs and the round tables
the rebbes read and eat.
I walk between them like a learned soul,
nodding my head and smiling,
doing the secret steps and making the signs,
following the path of authority and silence,
I and the dust, in the black soup and the herring.

After Rejoicings, Stern published his critically-acclaimed collection, Lucky Life (1977), which was to earn the Lamont Poetry Award in 1977. In the 1989 interview with David Hamilton, Stern professed an appreciation for the poems in this collection, stating: "I have great pleasure that I was able to write poems that I'm still very, very pleased with, happy with, amazed at." He goes on to marvel at how he managed to write such poetry while juggling the stress of marriage, parenthood, and teaching.

He moved through various jobs for the next two decades, spending time at the University of Pittsburgh, Sarah Lawrence College, Columbia University, and then Somerset Community College. A son, David, and a daughter, Rachel, were born to Stern and Miller during this time, but the marriage ended in the early 1980s. Soon after, Stern produced The Red Coal (1981), a poetry collection that earned him the Melville Caine Award. In 1982, Stern accepted a position with the renowned University of Iowa's Writer's Workshop to teach poetry.

During this teaching campaign, Stern was shot in Newark, New Jersey, while on his way to a poet's conference in Bethlehem. With a bullet lodged in his neck serving as a reminder, he wrote his first biographical essay, "Bullet in the Neck," about the experience, which can be found in his book of essays, What I Can't Bear Losing: Notes from a Life (2003). Also in this collection are several essays that address Stern's Jewish upbringing, such as "Sundays," "First Rites," "Sabbath," and "A Day Without the Jews." The presence of Stern's religious background in his writing reinforces its role in shaping the man he became. In 1990, Stern moved to New York to teach briefly at both Princeton University and the New York University. Before he retired from teaching in 1995, Stern published the collection Bread Without Sugar (1992), which received the Paterson Poetry Prize from New Jersey's Passaic County Community College.

After retirement, Stern continued to produce award-winning poetry: his book This Time: New and Selected Poems (1998)won the National Book Award for poetry—a testament to its excellence compared to other poetry collections of the year. Stern possesses numerous other awards and fellowships on account of his poetry's success: Jerome J. Shestack Poetry Prize, P.E.N Award, Ruth Lilly Prize, Guggenheim Fellowship, NEA Fellowship, and the Pennsylvania Governor's Award for Excellence in Arts. His other awards include the Wallace Stevens Award—a monetary honor awarded to poets who have greatly contributed to the art—bestowed in 2005, and his election as Chancellor of the Academy of American Poets in 2006.

His poem "Behaving Like a Jew," from This Time: New and Selected Poems, was selected for publication by the Public Poetry Project of the Pennsylvania Center for the Book in 2006.

In 2010, Stern was named the recipient of the Medal of Honor by the Academy of Arts and Letters. He received the 2012 Bobbitt National Prize for Poetry from the Library of Congress for his collection, Early Collected Poems: 1965-1992 (2010). In that same year, he published two new books, In Beauty Bright (2012), a collection of lyric poems that reflects his long life of writing, teaching, and activism—and Stealing History (2012), a prose collection described by Gerard Martinez of the San Antonio Press as "a trip, full of humor, wit and wisdom. The kind of thing you read in slow, measured sips. It's your grandfather on Sunday afternoons, after his scotch, plunked down on the beat-up old armchair."

At the time of this writing, Stern lives in Lambertville, New Jersey, with his companion Anne Marie Macari, a fellow poet. His daughter, Rachel, is a nutrition therapist and mother in Huntsville, Alabama, and his son, David, is an architect in Boston, Massachusetts.