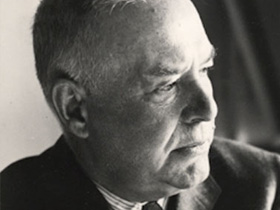 An acclaimed poet, Stevens'book The Collected Poems of Wallace Stevens won both the National Book Award for best poetry and a Pulitzer Prize in 1955.

Of all the Modernist poets living in the twentieth century, Wallace Stevens led the most "normal" life. The second of five children, Stevens was born on October 2, 1879, to Garrett Barcalow Stevens and Margaretha Catharine (Kate) Zeller. Stevens was raised in the industrious, newly industrialized city of Reading, Pennsylvania. His father was a hard-working lawyer and business man, and his mother worked as a school teacher. According to Joan Richardson in her two volume biography, together they raised Stevens with values consistent with Puritan ethics: "virtues of industry, sobriety, and thrift." The age difference between Garret Jr. (eldest), Wallace, and John (youngest) had a large effect on Steven's poetry. His place in the family as a middle child gave Stevens the feeling of "moving up and down between two elements," as argued by Richardson. This 'moving up and down' later set the tone and theme for much of his poetry, like The Idea of Order at Key West. In this poem, the figure of the woman who "sang beyond the genius of the sea" is juxtaposed against the sea and the figure of Stevens observing how "it was she and not the sea we heard." The woman is in a form of limbo, because as "the song and water were not medleyed sound" the woman is unable to reconcile herself with the sea. Yet, she is also isolated from the humanity of Stevens: "As we beheld her striding there alone, / [We] Knew that there was never a world for her / Except the one she sang and, singing, made."

Stevens was a talented student at Reading Boys High School, making the honor roll twice. He enrolled at Harvard University in 1897. Young Stevens wanted to be a writer, yet his father maintained that he set Stevens to Harvard "to make something" of himself. Stevens studied French, German, and English literature. Throughout his time at Harvard, Stevens was influenced by philosopher-poets like George Santayana, William James, and Charles Eliot Norton. In particular, Santayana's aesthetic philosophy was to have a considerable influence upon Stevens own poetic theory. Through the influence of these faculty members and peers, like Russell Loines, Stevens began to translate his feeling of being 'between' his brothers into a more general sense. Stevens expressed this as moving between "imagination" and "reality," which eventually became his main theme. This artistic development can be viewed through his work for the Harvard Advocate, the undergraduate literary magazine that Stevens became president of in his senior year of college. While Stevens developed his writing talent at Harvard, his family circumstances began to change. In 1901, the year after Stevens left Harvard, Garret Sr. suffered a nervous breakdown due to the pressure of his practice and unsuccessful business ventures. After having enjoyed a particularly secure and affluent childhood, Stevens was now much more independent.

After leaving Harvard, Stevens chose to move to New York to pursue a literary vocation that gave him a reliable income. Armed with letters of introduction provided by the Harvard Old Boy's association, Stevens ventured into the world of journalism. His connections gained him access to newspapers such as the New York Post and the New York Tribune. Stevens chose to work for the latter; within a few months of living there, Richardson describes how New York became that "electric town which [Stevens] adore[d]." However, Stevens clashed with his father in regards to his journalistic career. Straining against parental expectations, Stevens followed his father's prudent advice and abandoned journalism for New York Law School in 1901, passing the bar four years later.

Following his graduation in 1904, Stevens began practicing his trade for several different law firms throughout New York. He began to court Elsie Viola Kachel, a simple country girl, who was "unthreateningly untutored in the ways of the world or of books." Stevens and Kachel married in Reading on September 21, 1909. They spent the next seven years living in New York. In 1916, Stevens took a job as an insurance lawyer at Hartford Accident and Indemnity Company, where he spent the rest of his professional life. Stevens's new position involved a good deal of travel all over the United States, and in 1916, he had his first business trip to Florida. This state influenced his works like The Idea of Order at Key West and Sunday Morning. His family life with Elsie was quiet. Their daughter, Holly, was born in 1924. By 1934, Stevens became Vice-President of the Hartford Company, a position that he held until his unfortunate demise from stomach cancer in 1955.

Stevens also wrote a remarkable amount of poetry. Unlike his modernist contemporaries, according to the Pearson collection, Stevens wasn't living "the bohemian life in Greenwich village" or "sipp[ing] wine in the caf??s," but his peers were still affected by his unmistakable literary talent.

Stevens began his national published career in 1914, when Pitts Sanborn, an acquaintance from Harvard, asked him to contribute to the 'avant-garde' magazine Trend. Stevens submitted a series of poems entitled Carnet de Voyage (trans. 'travel notebook'). This tentative move into the wider public sphere, after years of private poetical creation, put Stevens back into contact with his colleagues from his time editing the Harvard Advocate, including Witter Bynner, Carl Van Vechten and Walter Arensburg. Stevens's reunion with this literary group restored his desire to write poetry, and he followed his publication in Trend with many more in a range of modernist journals. During World War One, Stevens provided material for Aren Kreymborgs magazine Others: A Magazine of the New Verse. This enabled him to become part of the "[Others] gang," along with poets like Marianne Moore, e. e. cummings, Lola Ridge and William Carlos Williams.

During this period, one of Stevens most famous poems, Sunday Morning, was published in a truncated version (Verses 1, 8, 4, 5, 7) by his good friend Harriet Monroe in her journal Poetry. Throughout this work, Stevens appeals to a 'religion' of nature, with the "Complacencies of the peignoir, and late / Coffee and oranges in a sunny chair" forming the woman's celebration of "the bough of summer and the winter branch," which form the "measures" of her soul. Stevens balances this with the paganism of the "supple and turbulent ring of men ... [with] devotion to the sun" and the bodiless voice that cries, "The tomb in Palestine ... is the grave of Jesus." Stevens focuses on the religion of man, be it from a humanist, atheist or Christian point of view, but finishes on an image of pigeons making "Ambiguous undulations as they sink, / Downward to darkness, on extended wings," perhaps suggesting the futility of religion in the natural world. Overall, between the years of 1914 to 1923, Stevens achieved an astounding amount of publications (over 100 works), earning him national recognition for his poetical skill through his use of abstractions and 'exotic imagery.'

With the publication of Harmonium in 1923, Stevens was thrust into the critical spotlight. Critics respected his linguistic talent, but his poems, according to Pearson, were seen to embrace the "arts-for-art's sake" aestheticism that he embraced during his years at Harvard, which was obviously out of place in the aftermath of the war. Apparently scarred from these negative reviews, Stevens turned his back on the literary world to focus on his family and professional life.

After witnessing the Great Depression, Stevens returned to the poetical world and attempted to make his poetry more relevant to actual worldly conditions, deeming this approach the 'New Romantic.' This development of his poetry resulted in the publication of Ideas of Order (1935) However, in the Pearson collection, critics such as Stanley Burnshaw accused Stevens of being an "acutely conscious" member of "a class menaced by the clashes between capital and labor." Stevens was criticized again for his seeming inability to address social and political issues in his poetry. Contrary to silencing Stevens once again, the criticism of Ideas of Order spurred him on to publish Owls Clover and The Man with the Blue Guitar and Other Poems within a year of each other (1936-1937). His maturation and development is best seen in his volume Parts of a World, written between 1937 to 1942, which addresses the need for "cultural continuity" in the face of the horrors seen throughout World War II. Transport to Summer and Aurora's of Autumn followed in 1947 and 1950 respectively, and Thirteen Ways of Looking at a Blackbird was published in 1954. His poetical career culminated with his final publication, The Collected Poems of Wallace Stevens, which won the Pulitzer Prize in 1955.

Wallace Stevens is best known for his Modernist verse, which he shared in common with poets like Ezra Pound, William Carlos Williams, T.S. Eliot, and Hilda Doolittle. His style is an amalgamation of imagism, abstraction, and striking vocabulary. His works demonstrate the fascination he held for being in the 'middle,' using this idea to express his connection with both reality and imagination throughout his poems. Stevens was considered one of America's greatest poets at the end of his life.