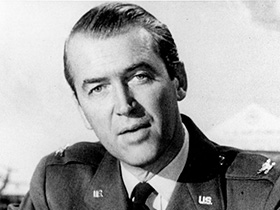 Jimmy Stewart, one of America's most beloved actors, was born in Indiana, Pennsylvania, in 1908. Educated at Mercersburg and Princeton, Stewart became an actor during the height of the depression, yet was fortunate enough to make it to Hollywood. He would earn an Oscar for The Philadelphia Story (1940), though most critics feel he should have earned it for the previous year's Mr. Smith Goes to Washington (1939). Outside his widely varying roles in the movies, he was a brigadier general in the Air Force Reserve and a loyal and loving husband. Jimmy Stewart passed away in 1997.

Jimmy Stewart was born in Indiana, Pennsylvania, on May 20, 1908, to Alexander Maitland Stewart and Elizabeth Jackson Stewart. His father was a local hardware store owner. In 1950, at the age of 42, he married Gloria Hatrick McLean. Gloria Stewart had two children from a previous marriage, Michael and Ronald McLean. In 1951, she gave birth to twins, Judy and Kelly Stewart. In 1969, Ronald McLean died in Vietnam, and in 1994, Gloria Stewart died from cancer at the age of 75.

Stewart attended Mercersburg Academy in Mercersburg, Pennsylvania, and Princeton University where he majored in architecture, earning a BSin 1932. While at Princeton, he met John Logan, who convinced Stewart to start acting. In 1932, he joined the University Players in Falmouth, MA. That year, Stewart moved to New York with Henry Fonda. In New York, he made his Broadway debut in Carrie Nation. He also met with Hedda Hopper who recommended him for a screen test, which led to a long-term contract with MGM studios. In 1934, Stewart moved to Hollywood and made his film debut with a walk-on part in Art Trouble (1934). He made his first film, Murder Man, in 1939, with Spencer Tracy. Over the next four years, Stewart would go on to make 24 movies, including the political classic Mr. Smith Goes To Washington (1939), in which Stewart portrayed the idealhonest politician. On March 22, 1941, Stewart enlisted in the Army Air Corps. He became an Air Corps pilot and a squadron commander. By the end of the war, Stewart was chief of staff of Second Combat Wing, Second Division, Eighth Air Force. He would continue his connection to the military, maintaining his membership in the Air Force Reserves. In 1959, he was promoted to the rank of Brigadier (one-star) General. After the war, Stewart continued to act. His first movie after the war was It's a Wonderful Life(1946), in which he gives his best-known performance. In 1949, Stewart met Gloria Hatrick McLean at a party at actor Gary Cooper's house. A year later they married. Over the next 20 years, Stewart continued to regularly appear in films. In 1970, Stewart returned to Broadway in the revival of Harvey, and then he worked on TV in The Jimmy Stewart Show, which ran on NBC from 1971-1972. Stewart appeared in his final feature acting role in 1978, in The Magic of Lassie, and in 1986, he had his last TV acting role in the ABC miniseries North and South: Book II. In 1989, Stewart published Jimmy Stewart and His Poems, a book of verse written between the 1950s and 1970s.

Stewart had received many awards for his work. He won the New York Film Critics Circle Award in 1939 for Best Actor for Mr. Smith Goes to Washington, and in 1959 for Anatomy of a Murder. He also received the Venice Film Festival Best Actor Award for Anatomy of a Murder. He received an Academy Award in 1940 for Best Actor for The Philadelphia Story, and was nominated a total of five times. Also in 1940, Stewart was awarded the National Board of Review Award for Best Acting for The Shop Around the Corner. In 1962, he won the Berlin Film Festival Best Actor Award for Mr. Hobbes Takes a Vacation. Stewart won the Cecil B. DeMille Award in 1965, and in 1968 he won the Screen Actors Guild Life Achievement Award. In 1970, he received The Drama Desk Award for Outstanding Performance for Harvey. Then in 1973, he won the Golden Globe Award for Best Actor in a Television Series (Drama) for Hawkins. He received the American Film Institute Life Achievement Award in 1980. Stewart received the Kennedy Center Honors Lifetime Achievement Award in 1983. In 1984, he was the first recipient of the Berlin Film Festival Golden Bear for Lifetime Achievement. Also, in 1984, he was awarded an honorary Oscar Award presented for "50 years of memorable performances." He also received the George Eastman Award for lifetime achievement in cinema. In 1985, Stewart was awarded the Presidential Medal of Freedom, the nation's highest civilian award.

Jimmy Stewart died of a blood clot in his lungs in Beverly Hills, California on July 2, 1997, at the age of 89.