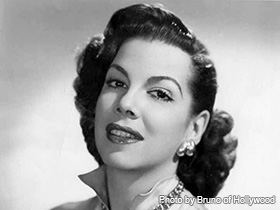 Author of The Valley of the Dolls (1966) Jacqueline Susann was born in West Philadelphia.

Jacqueline Susann was born on August 20, 1918, in West Philadelphia, Pennsylvania. Her mother was a school teacher, and her father was an artist. After graduating from West Philadelphia High School in 1936, she moved to New York, New York. Following the success of her first book, Every Night, Josephine! (1963), she published an exposé on the lives of celebrities with sex, drugs, and alcohol, entitled Valley of the Dolls (1966). It became one of the bestselling novels ever. Valley of the Dolls later became a movie and a television series. She later became the only novelist with three consecutive bestselling books. Susann died on September 21, 1974, in New York City.

Jacqueline Susann was born on August 20, 1918, in West Philadelphia, Pennsylvania. Her mother, Rose, was a schoolteacher and her father, Robert, was a portrait painter. Her father's surname was originally Susan, but her mother added the extra n to her and her daughter's name so that her students would place the emphasis of the last syllable instead of the first and, in doing so, pronounce it correctly. Her father's family were descendants of a financial adviser to Queen Isabella, a "de Suzanne," who raised the funds for Christopher Columbus's first voyage. Although she did not become traditional royalty, Jacqueline Suzanne made millions of dollars and became the undisputed "Queen of Pulp Fiction" of her generation.

Soon after her birth, the Spanish flu epidemic wrought havoc throughout Philadelphia. Rose and Jacqueline were forced to move to a small apartment in Atlantic City, New Jersey, which her mother had to keep sterilized. After two years, they returned home and Susann's father imparted his artistic sensibility in her.

While at West Philadelphia High School, she decided that college did not suit her passion to become an actress. Susann did not attend college, to the disappointment of her mother, an educator. She whole-heartedly desired to be an actress, so she moved to New York City when she graduated in 1936. Susann was offered mostly minor roles in plays like The Women. She acted in a total of 21 plays over the course of her acting career. At one of her auditions, she met Irving Mansfield, a publicist, who became her manager and husband. They married on April 2, 1939.

After five years of trying to make it big on Broadway, Susann felt disappointed with the state and quality of the plays. Thus, she decided to write her own. After five grueling days, she had typed a full-length play. Susann sought the critique of her friend, Margalo Gillmore, who was a well-known actress on the stage and screen. After she read it, Gillmore said, "This is a very bad play. But it's a start. Keep trying. Just don't show this to anyone." Susann followed her advice. She hid the play along with her typewriter and did not mention it again.

Her husband made it possible for her to garner popularity by having her written about in news columns. Soon after, she appeared regularly on The Morey Amsterdam Show, a radio show featured on CBS. Then, she received a spot in A Lady Says Yes, a Broadway show starring Carole Landis and Jack Albertson. In 1939, Susann co-wrote a play with Beatrice Cole, originally titled The Temporary Mrs. Smith. However, the play was not produced and did not open until 1946.

Susann also felt unfulfilled with her marriage, so she began an affair with Eddie Cantor, a famous comedian and actor. Because of this tryst, she was offered a speaking part in his show Banjo Eyes. After the closing of yet another show and after Cantor returned to his wife, Susann moved back home to Philadelphia to be with her family. Soon afterward, her husband was drafted to fight in the war. As a result, Susann requested a divorce via a letter, so that she could marry Joe E. Lewis, a famous comedian. Lewis soon signed up for the military to serve his country in New Guinea because of mixed feelings about a marriage with Susann.

Soon after, Susann reconciled with Mansfield in 1944. Two years later, Susann became pregnant, and her play, entitled The Temporary Mrs. Smith, opened. It opened on November 25, 1946, at the Walnut St. Theatre in Philadelphia. Before she gave birth to her son, she made a remark when she looked into the mirror while pregnant: "How could this have happened to lovely me?" Because of this comment, her play was renamed Lovely Me before opening on December 25, 1946, at the Adelphi Theatre on Broadway. On opening night, her water broke, and she missed the performance. There were 37 performances until it was cancelled. Her son was named Guy because he was "just some guy," not the daughter that she had wanted. He was later diagnosed with autism, and his parents had him institutionalized the following year.

1955 proved to be a big year for Susann. She became a fashion commentator for Schiffli Lace on Night Time, New York. The show ran two commercials nightly, which Susann wrote, starred in, and produced. Then she tried to establish an exposé about show-biz and drugs, which she wanted to title The Pink Dolls. Instead, she adopted a poodle named Josephine, who became the muse for a book about her experiences with her dog, which was aptly titled Every Night, Josephine! (1963). She was the "Schiffli Girl" until 1961. Although her book was originally intended for dog lovers, it was very successful and made her famous. Soon after it was published, Susann was diagnosed with breast cancer at the age of 44. She had a mastectomy at the end of 1962. On December 25, 1962, she wrote in her journal: "I can't die without leaving something. Something big." She kept her medical history a secret in hopes of becoming even more famous for her expos?? on show business and drugs, which become known as Valley of the Dolls.

Originally, Valley of the Dolls was rejected by many publishers. The subjects of the novel were taboo by nearly all standards. This book chronicled the rise and fall of three women and how they used the comforts of sex, drugs, and alcohol to deal with everything. The "dolls" were the pills used by the three women, which included uppers, downers, and diet pills. The press labeled it scandalous, which only garnered more interest, and it was published by Bernard Geis Associates on February 10, 1966. Also, there was a rumor that the novel was based on celebrities like Judy Garland and Ethel Merman, with whom she had reportedly tried to start a physical relationship. Many also claimed that she had had an affair with Coco Chanel and Carole Landis, whom some claim to be mirrored in Jennifer North's character in Valley of the Dolls (1966).

Although the public may have lauded her work, her peers did not. Gore Vidal, a renowned novelist, said, "She doesn't write, she types!" Critics also accused her of having "typed on a cash register." Her response to her critics was, "As a writer no one's gonna tell me how to write. I'm gonna write the way I wanna write!" In his novel Slaughterhouse-Five, Kurt Vonnegut Jr. wrote that the main character had a copy of Valley of the Dolls. He did this in order to give the main character a "cheap thrill" and break up the monotony and boredom of his typical life, in a satirical way. Susann took this as a compliment. The book turned into a hugely popular movie in 1967, starring Patty Duke, Sharon Tate, and Barbara Parkins. However, the film was a disappointment for Susann.

Three years later, The Love Machine (1969), was published. It was a story of a man who became the president of a television network. It was considered a "male-oriented" novel in the wake of Valley of the Dolls. In 1973, Once is Not Enough (1973) was published, which was the story of a poor girl who became a rich swinger in search of her father. Unfortunately, Susann's cancer returned and stopped her from touring in support of the book. Nevertheless, it also became a #1 bestseller, making her the only author to have three consecutive bestselling novels. While she was in the hospital, she went into a coma and stayed in that state for seven weeks until she died on September 21, 1974, at the age of 56. Posthumously, Yargo(1979) was published. It was a romance, science fiction novel written in the 1950s about a woman who falls in love with an alien. Dolores was also published posthumously. Dolores was an ode to Jacqueline Kennedy Onassis.

Susann's Valley of the Dolls inspired the song "Personality Crisis" by The New York Dolls, which was released in 1973 and became a punk rock hit of the 1970s. Susann's life inspired others. Susann's life became the subject for Barbara Seaman's Lovely Me: The Life and Times of Jacqueline Susann, which was published in 1987. Her life was also the subject for a made-for-TV movie, entitled Scandalous Me: The Jacqueline Susann Story in 1998. Furthermore, her life provided material a film entitled Isn't She Great, which starred Bette Midler and was released in 2000. It also provided subject matter for the play Paper Doll, starring Marlo Thomas. Finally, author Rae Lawrence wrote and completed Shadow of the Dolls, using notes that Susann had planned to use for a sequel to Valley of the Dolls, and it was released in 2001. Susann's Valley of the Dolls was recognized along with Gone with the Wind and To Kill a Mockingbird as the best selling novels written by female writers in history by the Guinness Book of World Records. Susann's novel had more than 20 million copies in print.