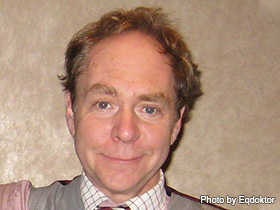 Born in Philadelphia, illusionist Teller has become famous with his partner, Penn Jillette.

Teller was born in Philadelphia, Pennsylvania, on February 14, 1948. He graduated from Amherst College in 1969 and became a Latin teacher in Lawrenceville, New Jersey. He quit teaching to become a professional magician. He teamed up with Penn Jillette in 1975, and they became famous as "Penn and Teller" by 1985. He has also written essays, articles, and books, and he has been on television and in movies. He starred in Macbeth in January 2008. Penn and Teller currently perform together, and both live in Las Vegas.

Teller was born on February 14, 1948, at Jefferson Hospital in Philadelphia, Pennsylvania. He grew up in Center City, about five blocks from City Hall. His parents, Joseph Teller and Irene Derrickson, met in art school as painters. Joseph was also a painter, sculptor, and cartoonist. According to New Yorker columnist Calvin Trillin, "Teller thinks of both of them as bohemians who worked hard at doing what parents in conventional families do." Both died in 2004. Teller's parents were a great inspiration to him, and he has written numerous essays and articles about both of them. His parents were the subject of Teller's book, When I'm Dead, All This Will Be Yours (2000).

Teller has been an actor, teacher, writer, director, and musician, but he is best known as one half of the magic act, "Penn and Teller." Teller became interested in magic at the age of five, when he performed illusions with a mail-order magic kit. He enjoyed magic as a hobby through high school and college, but did not perform professionally until the age of twenty-seven. Teller went to Central High School in Philadelphia and Amherst College in Massachusetts, graduating in 1969. He became a Latin teacher at Lawrence High School in suburban Trenton, New Jersey. Pete Moss, a friend, fellow artist, and former student of Teller's, writes, "If you don't have any money, you gotta have the right teachers, and I had Teller. The lesson I learned from Teller is one I'm still working on. To me that's the mark of a really great teacher." Teller is notably one of the only people to have just one name on his driver's license and passport.

Teller quit teaching in 1975 to pursue a career as a magician. He performed solo on street corners, at fairs, and other venues. He stopped speaking during his acts as an artistic challenge which paid off in decreased heckling. Teller's almost-always silent showmanship has made him one of the most famous mutes since Harpo Marx. The rarity of his speech makes great joke material. In one performance Penn remarked, "Teller never speaks." Teller replied, "That's right, Penn."

Teller and Penn Jillette have been performing together since 1975. Along with Wier Chrisemer, they formed the Asparagus Valley Cultural Society. Teller was an illusionist, Chrisemer played assorted instruments, including pipe organ, xylophone, and nose flute, and Jillette juggled. At Teller's first performance with Wier, Teller sold pencils in the lobby outside of Chrisemer's performance, "The Othmar Schoeck Memorial Society for the Preservation of Unusual and Disgusting Music." Penn Jillette was also on the program, riding a unicycle across the stage and juggling onto drums.

The Asparagus Valley Cultural Society was a success, and they traveled from Philadelphia to San Francisco. Its new producer, James Freydberg, called the act a "brilliant play." Eventually, Chrisemer, Penn, and Teller parted ways. Some cite a clash of Chrisemer's religious beliefs with Jillette and Teller's hardcore atheism. Chrisemer expressed frustration with Penn and Teller's tendency to dismiss religion as a hoax, like they did so many magic tricks: "Religion was not only all bunk to them but they made no distinctions. To them, Falwell and Bonhoeffer are all the same." Whatever the reasons, the Society of three eventually became the duo, Penn and Teller.

Before perfecting their act, Teller starred in a play that Penn and Teller had written, which Penn directed. It was called Mrs. Lonsberry's Séance of Horror. The show was unsuccessful, and closed almost immediately. Freydberg believed it was due to an exaggeration of their disagreement with Chrisemer, and critics drew negative comparisons to "Asparagus." Teller called it "difficult" and "excessively cerebral." After Lonsberry, Penn and Teller spent the summer of 1982 performing at the Minnesota Renaissance Festival, where they were billed as "Penn Jillette and/or Teller." They took this act from Minneapolis, to Toronto, to Texas, and finally to Los Angeles. At first, they played very small audiences and conducted trick "séances" in wealthy LA homes. Penn and Teller performed amazing feats of magic and skill, all the while explaining and de-bunking their craft. Death-defying acts still showcase Penn's fire eating and Teller's Houdini-esque tricks, including swallowing needles and being suspended above a bed of nails or confined to a straight jacket while under water. Their unique act began to take off, and they did their first television special for PBS in 1985.

The PBS show, Penn and Teller Go Public, launched them into the larger public eye, and many successful television appearances, movies, and co-authored books followed. From 2003 to 2010, they had a series on Showtime, Penn and Teller: Bullshit! Over the years, the show was nominated for 13 Emmys and was the longest running series on Showtime's network. Penn and Teller also succeeded in individual projects. Teller has done more "conventional" acting, on screen, as a guest star on many popular shows, and on the stage. He appeared in the HBO film "Long Gone" with Henry Gibson and William Peterson. He was on episodes of Sabrina, the Teenage Witch, The Drew Carrey Show, and Dharma and Greg. He had starring roles in the films, My Chauffer (1986), Car 54, Where Are You? (1994), and The Fantasticks (1995). He is considered to be an expert on the history of magic, and he has appeared in documentaries, and written essays, articles, and books on the subject. House of Mystery: the Magic Science of David P. Abbot (2005) is his most recent book. In January 2008, Teller starred in a version of Macbeth that he has adapted to include magic. In a journal entry on the Penn and Teller website, he said, "The premise is that Macbeth is Shakespeare's supernatural horror story, and should be done as violently and amazingly as a modern supernatural horror movie." The show premiered in New Jersey then traveled to Washington, D.C. Teller continues to paint, and he has been a called a skilled visual artist.

Although he is accomplished in many areas, Teller's fame is derived mostly from his exceptional skill as a magician. According to magician Charles Reynolds, most magic acts use a variation of the same set of about a dozen tricks, dating back to Victorian times. Teller is one of a few magicians to have created an entirely new illusion. He calls it "shadows" and uses the effect to seemingly destroy a rose by cutting into its shadow. Reynolds ranks this as one of two "outstanding moments in American magic," the other being Harry Blackstone's Floating Light Bulb trick. Teller is also known for his ability to greatly improve upon old tricks. One of his favorite illusions involves swallowing individual needles then pulling them back out of his throat tied to a string. This is a trick that Houdini performed, but according to magician David Rosenbaum, a former teacher of Teller's, "if Houdini saw Teller perform it now he wouldn't know how it was done." Perhaps Penn, Teller's longtime partner and friend gave Teller the highest compliment when he told Trillin, "Teller's one of the three best magic minds alive today, and the two others don't have taste." In 2009, Penn and Teller co-starred in Katie Perry's music video for her number 1 song, "Waking Up in Vegas." In 2010, Tellera and Todd Robbins co-wrote an Off-Broadway show entitled Play Dead, which premiered in New York Players Theatre. Teller currently performs with Penn, and both magicians live in Las Vegas. Their newest television show, Penn and Teller Tell a Lie, premiered on the Discovery channel in October 2011.