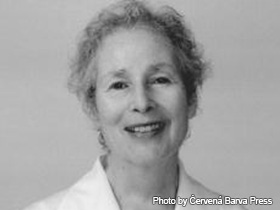 Elaine Terranova was born in 1939 in Philadelphia, Pennsylvania. Her piece "The River Bathers" was featured in the 2003 series of the Public Poetry Project. Her poetry collections include The Dog's Heart (2002), Not To: New and Selected Poems (2006), a runner-up for the William Carlo Williams Award in 2007, and her most recent book, Dollhouse (2013). At the time of this writing, Terranovateaches Creative Writing at the Community College of Philadelphia and in the MFA Program at Rutgers, Camden. She lives in Philadelphia with her husband, Dr. Lee H. Cooperman.

Elaine Terranova was born in Philadelphia, Pennsylvania, in 1939 to Nathan and Sadie Goldstein. She remained in the city for her college education when she attended Temple University. She received her Bachelor's degree in 1961, the same year she married her first husband, Philip Terranova. Twelve years later her work in the literary field began when she took a position at J. B. Lippincott Co. as a Manuscript Editor. While working there, Terranova studied for her Master's degree through Vermont's Goddard College. After attaining her degree in 1977, she shifted from editing to education. She began teaching English and Creative Writing at her alma mater, Temple University. Terranova remained at Temple until 1987, when she took on her position as a Reading and Writing Specialist at the Community College of Philadelphia.

By this time, Terranova had already begun her poetic career, having written a chapbook of poems called Toward Morning/Swimmers, which was published in 1980. Her first collection, The Cult of the Right Hand, was chosen by Rita Dove as the winner of the 1990 Walt Whitman Award of the Academy of American Poets. The award sparked great interest in Terranova; she was chosen to lead workshops at the 1991 Rutgers University Writers Conference and the 1992 Writers' Center at the Chautauqua Institution. She also gave an interview in 1991 on the National Public Radio (NPR) segment All Things Considered.

At the 1992 Bread Loaf Writers' Conference, she held the Robert Frost Fellowship in Poetry. That same year, her poem "The Stand-up Shtel" took first prize in the Anna Davidson Rosenberg Competition for poems on the Jewish experience. Damages, her second collection, received warm reviews in 1996; during that year, Terranova was appointed the Margaret Banister Writer-in-Residence at Sweet Briar College. "The Choice," a selection from Damages, appeared on buses and in subways throughout Philadelphia as a part of the Poetry Society's Poetry in Motion project.

"The River Bathers," another piece from Damages, was selected for publication by the Public Poetry Project of the Pennsylvania Center for the Book in 2003.

Terranova's poetry itself is keenly aware of loss and trouble, slipping behind outward appearances to expose fresh views. The voice of many of the poems is that of an intimate observer, one who exposes the thoughts of the subject delicately but without fulsome pity. This is illustrated in this portion of "Laterna Magica":

And one day
a house burns down
as a woman cooks dinner.
Miraculous—the family escapes.
Expensive place. Acres
of feathery trees. You know the man,
have in your mind a glimpse of him
as you turned a corner
or at a blind landing of the stairs.
You forget this fire
until a plane crash lands
and he and his child are listed
among the lost. Their names
could be tubas and kettledrums,
a music too important
for the radio. Pink messages
pulse across your desk
but you are staring
at the irises in a vase
that rise like faces out of smoke.

Because of its common appeal and vaguely disconcerting revelations, Terranova's poetry has been published in many magazines and journals. Her work has been showcased by The New Yorker, American Poetry Review, Prairie Schooner, Virginia Quarterly Review, and Parnassus Magazine.

In her collection, Dollhouse (2013), "Terranova weaves her poetics of space by setting the fragile orders of the dollhouse against the realities of family fiction and the terror of a whole world outside where no shelter can be found — all this in exquisite, minimalist music," according to Off the Grid Press.

The recipient of numerous awards, including a Pew Fellowship in the Arts (2006), the Pushcart Prize, and a National Endowment for the Arts Fellowship, Terranova has been an editor and a teacher of Creative Writing, as well as an Artist in Education in Pennsylvania schools. She has served on the faculty of the University of Delaware, the Curtis Institute of Music, and Temple University.

At the time of this writing, she teaches Creative Writing at the Community College of Philadelphia, where she has served since 1980, and in the MFA Program at Rutgers, Camden. She lives in Philadelphia and is married to Dr. Lee H. Cooperman.