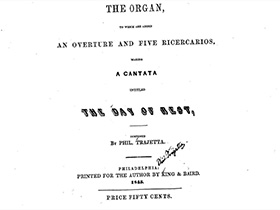 Filippo Traetta, composer of The Venetian Maskers, the first opera written in America, founded the Conservatorio in Philadelphia.

Filippo Traetta was born into a musical family in Venice in 1777. Though he was trained to become a soldier, young Traetta also received musical instruction. Following his imprisonment after an abortive revolution in Italy, Traetta was smuggled to America and became involved in the music industry. He composed the first opera in America, The Venetian Maskers. Later he founded conservatories first in Boston and then in Philadelphia. Traetta died in 1854 in Philadelphia, Pennsylvania.

Filippo Traetta was born in Venice, Italy, on January 8, 1777. He was the son of famous opera composer Tomaso Traetta. His father died when Filippo was just three years old. His Swedish mother sent him to the Public Studies School run by the Jesuits in Venice. At age 13, his time at the school ended because the Jesuits felt they had imparted all he could absorb. At that point, he was sent to study under music masters Feneroli and Perillo. He learned composition, counterpoint, and the fugue form. Later, they sent him on to Naples to study with Niccolo Piccinni, a well-known composer. Though music was the family business, young Filippo's training in that subject was primarily just for his intellectual cultivation. His true vocation early in life was that of a military man. His military involvement began in the 1799 revolution against King Ferdinand IV of Naples. The rebels lost the campaign, and Traetta was arrested for two reasons: being a soldier in the losing army and being the composer of several patriotic, anti-monarchy hymns. He served eight months in prison before he was given a German passport and smuggled into America on General Darby's ship.

The failed revolution marked the end of Traetta's first career, but the passage to America marked the true beginning of his musical career. His 1799 escape took him to Boston, Massachusetts, where he settled for two years. He and fellow musicians Mallet and Graupner founded the American Conservatorio there in early 1801. He wrote his Vocal Exercises and composed "Washington's Dead March." That same year, he moved to New York, which is where he is thought to have written a number of oratorios and the first American opera: The Venetian Maskers. He divided his time between New York and various locations in the South for the first two decades of the nineteenth century. He was a theatre manager in Charleston, South Carolina for a period of time, and people believed he also lived in Virginia, since he was often visited by former presidents Madison and Monroe, both of whom thought highly of Traetta.

In the early to mid 1820s, Traetta moved to Philadelphia, which became his permanent home. In 1828, he founded another incarnation of the American Conservatorio. His oratorios Jerusalem in Affliction and Daughter of Zion received their premieres in Philadelphia in 1828 and 1829 respectively. Traetta gave music lessons and conducted musical performances there until his final days. The Philadelphia Evening Bulletin (reprinted in Dwight's Journal of Music) said that "in every sense he was a gentleman."

Filippo Traetta died in Philadelphia on January 9, 1854. He is currently a little known composer. Otto Albrecht wrote that a 1976 performance of Traetta's string music in Philadelphia surely indicated that his music may be undeservedly forgotten.